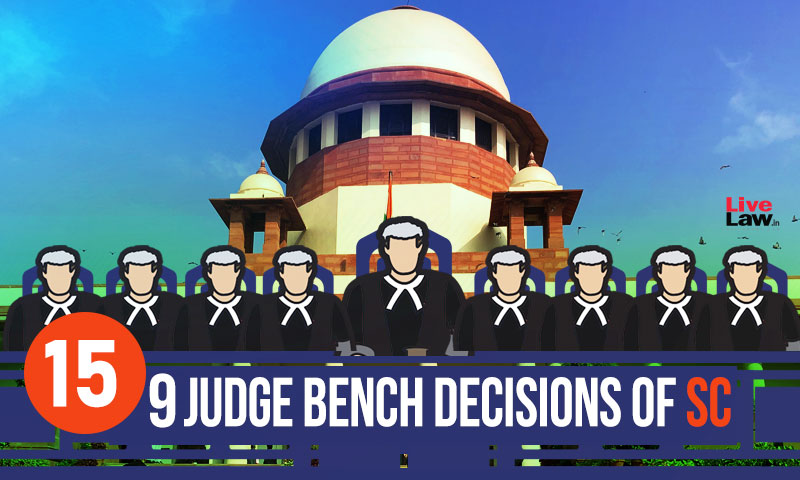 A nine-judge bench of the Supreme Court is at present considering the issues of religious freedom and fundamental rights mentioned in the Sabarimala review order.

In this backdrop, it is pertinent to note that there have been 15 nine-judge bench decisions in the history of Supreme Court.

Here is a list of 15 landmark decisions by nine-judge benches in the history of the Supreme Court (in chronological order).

" Taxable event in the case of duties of excise is the manufacture of goods and the duty is not directly on the goods but on the manufacture thereof", the bench observed

The bench interpreted the word 'citizen' in a broader perspective and held that the State Trading Corporation although a legal person was not a citizen and can act only through natural persons. It was also observed that certain fundamental rights enshrined in the Constitution for protection of "person" (such as the right to equality under Article 14) are also available to a company. Section 2(f) of Citizenship Act, 1995 expressly excludes a company or association or body of individuals from citizenship.

" Even if the State Trading Corporation be regarded as a department or organ of the Government of India, it will, if it be a citizen competent to enforce fundamental rights under Part III of the Constitution against the State as defined in Art. 12 of the Constitution."

The bench considered whether the State of West Bengal, when it was carrying on a trade, as owner and occupier of the market at Calcutta, without obtaining the license was bound by the Calcutta Municipality Act or by necessary implication was exempted to obtain the license. The court held that an enactment applies to citizens as well as to the State unless it expressly or by necessary implication exempts the State from its operation, steers clear of all the anomalies and is consistent with the philosophy of equality enshrined in the Constitution.

" The State cannot claim the exemption to obtain a license on the ground that the Calcutta Municipal Act does not expressly or by necessary implication to make it binding on the State."

The majority held that a judicial order passed by a court cannot be challenged as infringing fundamental rights.

The court interpreted the contours of rights of minority educational institutions under Article 30.

"The rights conferred on the religious and linguistic minorities to administer educational institutions of their choice is an absolute right."

The bench by 6:3 majority upheld 27% SEBC reservation in government jobs, with the exclusion of 'creamy layer'.

" While reserving posts for backward classes, the departments should make a condition precedent that every candidate must disclose the annual income of the parents beyond which one could not be considered to be backward. What should be that limit can be determined by the appropriate State. Income apart provision should be made that wards of those backward classes of persons who have achieved a particular status in society either political or social or economic or if their parents are in higher services then such individuals should be precluded to avoid monopolization of the services reserved for backward classes by a few. Creamy layer, thus, shall stand eliminated. And once a group or collectivity itself is found to have achieved the constitutional objective then it should be excluded from the list of backward classes.

" Article 356 of the Constitution confers a power upon the President to be exercised only where he is satisfied that a situation has arisen where the Government of a State cannot be carried on in accordance with the provisions of the Constitution. Under our Constitution, the power is really that of the Union Council of Ministers with the Prime Minister at its head. The satisfaction contemplated by the article is subjective in nature."

Notably, the Court also held in this case that "secularism" was a basic structure of the Constitution.

The bench held that Parliament was competent to enact COFEPOSA. The court held that the enactment was relatable to Schedule VII, Entry 3 of List III inasmuch as it provides for preventive detention for reasons connected with the security of State as well as the maintenance of supplies and services essential to the community besides Schedule VII Entry 9 of List I of the Constitution of India.

The bench decided by a majority of 8:1 as to what rights and remedies are available to a citizen against the State in the matter of refund of unlawfully recovered taxes and imposts.

" Excise duty is an indirect levy. It is intended or presumed to be passed on. This is so under ordinary law. Section 12B of the Act only provides a statutory rebuttable presumption in that regard. If it turns out that the levy is not exigible, it is refundable to the person who had borne the liability."

"The property taxes levied by and under the Punjab Municipal Act, 1911, the New Delhi Municipal Corporation Act, 1994 and the Delhi Municipal Corporation Act, 1957 constitute "Union taxation" within the meaning of clause (1) of Article 289 of the Constitution of India. The levy of property taxes under the aforesaid enactments on lands and/or buildings belonging to the State governments is invalid and incompetent by virtue of the mandate contained in clause (1) of Article 289. However, if any land or building is used or occupied for the purposes of any trade or business - trade or business as explained in the body of this judgment - carried on by or on behalf of the State government, such land or building shall be subject to levy of property taxes levied by the said enactments.

This case discussed fine-tuned the "Collegium system" conceived in the 1993 decision with further parameters. This was by answering a Presidential Reference seeking advisory opinion on the Collegium System.

The bench laid down the procedural norms for the appointment of judges of the Supreme Court and High Court. The court said that the Chief Justice is obliged to comply with the norms and the requirement of the consultation process in making his recommendations to the Government of India.

"A law that abrogates or abridges rights guaranteed by Part III of the Constitution may violate the basic structure doctrine or it may not. If former is the consequence of the law, whether by amendment of any Article of Part III or by an insertion in the Ninth Schedule, such law will have to be invalidated in the exercise of judicial review power of the Court."

The bench by a majority of 7:2 majority upheld the validity of the entry tax imposed by States on goods imported from other States. It was held that the word 'Free' used in Article 301 does not mean "free from taxation".

" Levy of taxes is an attribute of a sovereign State as per Constitutional scheme and limited to the extent as provided in the Constitution."

This bench delivered the landmark verdict declaring "right to privacy" a fundamental right under Article 21 of the Constitution.

"The right to privacy is protected as an intrinsic part of the right to life and personal liberty under Article 21 and as a part of the freedoms guaranteed by Part III of the Constitution."

The bench unanimously held that the right to privacy is a fundamental right protected under the Constitution of India. The petition challenged the constitutional validity of the Government's Aadhaar scheme on the ground that it violates the right to privacy. This decision has been recognized as being of great legal and political significance.