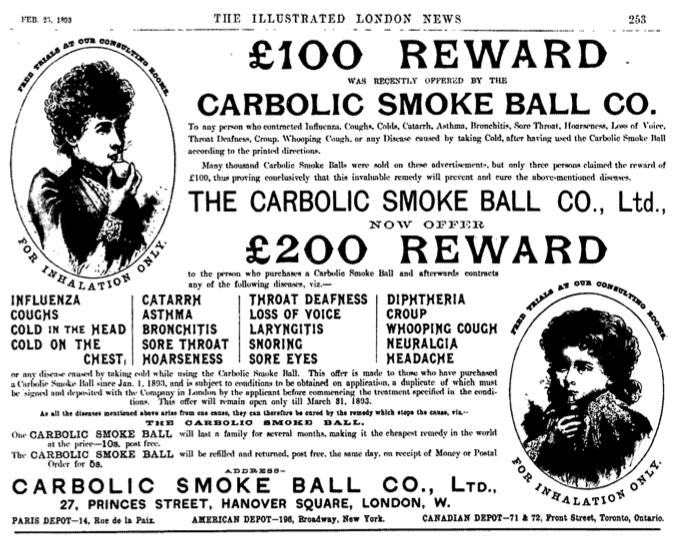 Placebos and fake medicines promising cures emerge whenever society is faced with epidemics. There will be elements in society, who will try to make quick money through offers of magical cures by exploiting the gullible sections in the wake of the inability of established medicinal systems to offer ready remedies to a novel disease.One such attempt by a company during the influenza epidemic...

Placebos and fake medicines promising cures emerge whenever society is faced with epidemics. There will be elements in society, who will try to make quick money through offers of magical cures by exploiting the gullible sections in the wake of the inability of established medicinal systems to offer ready remedies to a novel disease.

One such attempt by a company during the influenza epidemic in England led to the birth of a landmark decision in contract law and consumer rights : Carlill v Carbolic Smoke Ball Co(1892).

It was the last decade of the nineteenth century. Influenza had spread all over the world. One million human lives had fallen prey to the virus. Carbolic Smoke Ball Company, a pharmaceutical company based in London wanted to cash in on the medical emergency triggered by the epidemic outbreak. The company introduced Smoke Ball, a product which it claimed as a cure for influenza. Smoke Ball was an inhaler filled with carbolic acid. The company claimed that a person who uses Smoke Ball would never contract influenza. Further, the company advertised in newspapers that any person who catches the flu in spite of having used Smoke Ball three times a day for two weeks will be rewarded with £100 and that it had deposited £1,000/- in Alliance Bank towards the payment of reward.

The company was represented in court by H.H Asquith, a barrister from London. Asquith's arguments on the intricacies of contract law permeated the court hall. He argued that in the absence of an offer from the company and a subsequent acceptance by Mrs. Elizabeth, there was no lawful contract between them. The advertisement, Asquith argued, was only a wager and the company had no intention of entering into a contractual relationship with Mrs. Elizabeth.

The court, however, did not accept those contentions. It held that the advertisement made by the company was a lawful offer and the buying of Smoke Ball by Mrs. Elizabeth consequent to the advertisement was acceptance of the said offer. Further, it was observed by the court that the deposit of £1,000/- by the company in bank signified its intention to enter into a contractual relationship. Mrs. Elizabeth was awarded compensation by the court.

"If this is an offer to be bound, then it is a contract the moment the person fulfils the condition", Lord Bowen observed.

"If I say to a person, "If you use such and such a medicine for a week I will give you 5l.," and he uses it, there is ample consideration for the promise", he added in the judgment.

Lord Bowen explained the position by adding an illustrative example :

"If I advertise to the world that my dog is lost, and that anybody who brings the dog to a particular place will be paid some money, are all the police or other persons whose business it is to find lost dogs to be expected to sit down and write me a note saying that they have accepted my proposal? Why, of course, they at once look after the dog, and as soon as they find the dog they have performed the condition. The essence of the transaction is that the dog should be found, and it is not necessary under such circumstances, as it seems to me, that in order to make the contract binding there should be any notification of acceptance. It follows from the nature of the thing that the performance of the condition is sufficient acceptance without the notification of it, and a person who makes an offer in an advertisement of that kind makes an offer which must be read by the light of that common sense reflection. He does, therefore, in his offer impliedly indicate that he does not require notification of the acceptance of the offer".

"This was an offer intended to be acted upon, and, when acted upon and the conditions performed, constituted a promise to pay", Lord Smith succinctly said.

The Court held that if there is an offer to the world at large, and that offer does not expressly or impliedly require notification of performance, performance of the specified condition in the offer will constitute acceptance of the offer and consideration for the promise

The Court also rejected the argument that the acceptance of the offer was a 'wager'.

This case set the precedent that even a unilateral offer could lead to a binding contract and is still cited as a reference for law students all around the world to learn the essentials of contract law.

We can trace history of the consumer movement from this judgment. In this case first time Manufacturers' liability for minimum quality standard for product was established.

The case finds a place in history not just for its contribution to the jurisprudence of contract law but also for the counsel who appeared in it.

Shortly after the case before the lower court, H.H Asquith quit law and entered politics. He couldn't appear for the company before the appeal court. By then, he was the Home Secretary of the United Kingdom and had achieved great heights in politics. He then went on to become the Prime Minister of the United Kingdom and governed the British Empire for eight long years.

(The author is a lawyer practicing in Calicut, Kerala).