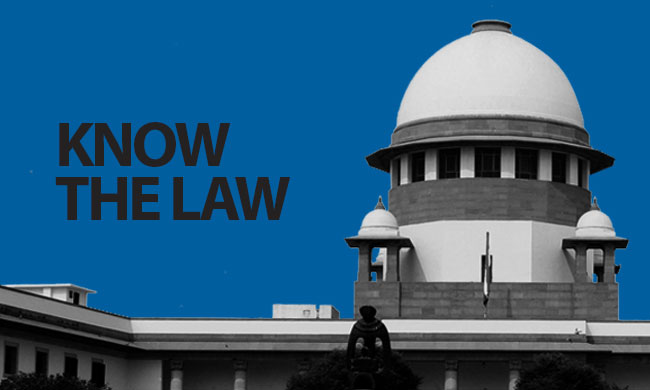 x
The correct test in cases falling under O.II R.2, is "whether the claim in the new suit is in fact founded upon a cause of action distinct from that which was the foundation for the former suit".

No one should be troubled more than once for the same cause of action - this is the underlying principle of Order II Rule 2 of the Code of Civil Procedure.The general rule is that a suit should include the whole of the claim which a plaintiff is entitled to make in respect of a cause of action. This is embodied in Order II Rule 1. However there is no such compulsion, and the plaintiff is...

No one should be troubled more than once for the same cause of action - this is the underlying principle of Order II Rule 2 of the Code of Civil Procedure.

The general rule is that a suit should include the whole of the claim which a plaintiff is entitled to make in respect of a cause of action. This is embodied in Order II Rule 1.

However there is no such compulsion, and the plaintiff is at liberty to relinquish or omit any portion of such claim. But there is a  consequence. The plaintiff will be barred from filing another suit for the portion of the claim which was relinquished or omitted. Order II Rule 2 speaks of this bar.

The impact of the provision is succinctly explained in the illustration given to it in the Code itself :

Identical cause of action in both suits

In a 1949 case dealt with by the Privy Council, two suits for recovery of possession were filed in respect of two different properties. The second suit was held to be barred, as the first suit did not include the claim over the second property.

The plaintiff argued that since the properties are different, the causes of action were also different. This was rejected on the reasoning that the claim over both the properties were based on the same set of facts. In other words, the plaintiff had to plead and prove the same set of facts in both the suits to establish title over both the properties. Since the "bundle of essential facts" to prove title in both the cases were the same, the claim over the second property was held to be arising out of the same cause of action of the first suit ( See Mohammad Khalil Khan v Mehbub Ali Mian AIR (36) 1949 PC 87)

The Privy Council in this case summarised the principles as follows :

When causes of action are different, bar will not apply

The case Alka Gupta v Narendar Kumar Gupta (2010) 10 SCC 141 presents a situation where the Court held that Order 2 Rule II did not apply.

There, the parties were partners of a partnership firm which ran an institute. In 2004, one of the partners sold her undivided share in the property where the institute was located to the other partner. For claiming the balance of sale consideration in respect of that sale, a suit was filed in 2004.

After that suit was decreed, another suit was filed in 2007 for rendition of accounts of the partnership firm for the period 2000 to 2004, on the ground that the partnership was dissolved by implication in 2004. The trial court held that suit to be hit by Order 2 Rule 2. The High Court too expressed the same view and said that the claim for settling of accounts ought to have been raised in the first suit itself.

The Supreme Court did not agree. It said :

There, the bank first filed suit for recovery of arrears of loan advanced for purchase of a bus. There was a hypothecation charge on the bus. Though the suit was decreed, the bank could not execute it as the bus went missing.

Therefore, the bank filed another suit for enforcing equitable mortgage against properties offered as security.

The SC held that suit based on mortgage arose out of a different cause of action. The Court also referred to Order 34 Rule 14 of CPC, which says that mortgaged property can be brought to sale only by way of a suit, even if the mortgagee has obtained another decree for payment of money. It is also mentioned in Order 34 Rule 14 that suit for mortgage can be maintained notwithstanding Order 2 Rule 2.

"It is clear from sub-rule (1) of R.14 of O.34 of the Code that notwithstanding anything contained in O.2 R.2 of the Code, a suit for sale in enforcement of the mortgage can be filed by the plaintiff Bank and in fact that is the only remedy available to the Bank to enforce the mortgage since it would not be entitled to bring the mortgaged property to sale without instituting such a suit", the apex court observed.

The bar under Order II Rule 2 cannot be applied at the mere asking of the defendant.

The defendant has to plead that the suit is based on an identical cause of action as the previous suit, and has to prove it.

The pleadings in the earlier suit should be exhibited or marked by consent or at least admitted by both parties. The plaintiff should have an opportunity to explain or demonstrate that the second suit was based on a different cause of action. The Court has to frame an issue regarding this. If the defendant wants to show that the causes of action were identical in the two suits, it is necessary to mark in evidence the earlier plaint and make out that there was a relinquishment of a relief by the plaintiff. ( See Alka Gupta, S Nazeer Ahmed (supra))

While considering whether a second suit by a party is barred by O.2 R.2 of the Code, all that is required to be seen is whether the reliefs claimed in both suits arose from the same cause of action. The court is not expected to go into the merits of the claim and decide the validity of the second claim. The strength of the second case and the conduct of plaintiff are not relevant for deciding whether the second suit is barred by O.2 R.2 of the Code( See, Alka Gupta (supra)).

In a recent judgment - Pramod Kumar & Anr v Zalak Singh & Anr, the Supreme Court was dealing with a situation where two suits were filed by the plaintiffs for setting aside two different sale deeds executed by their father. They sought the relief on the plea that their father had unauthorizedly alienated joint family property and that the alienation was perjudicial to the interests of the family.

The sale deeds were executed in a month's gap, and related to different portions of the same property. The purchaser of both the portions were the same person.

The question was whether the second suit was barred by Order 2 Rule II.

The plaintiff referred to Article 109 of the Limitation Act, which states limitation period for suit by a Hindu governed by Mitakshara law to set aside father's alienation of ancestral property will start running after the alienee takes possession of the property.

Based on this, the plaintiff argued that the cause of action for the second suit was different, as it arose only later to the first suit.

This was rejected by the bench of Justices Ashok Bhushan and K M Joseph. The bench noted that the basis of claim in both the suits were substantially the same.  Both the suits contained identical averments in relation to both the sale transactions. Therefore, both the suits were held to have arisen from the same cause of action, which was identified as the alienation of ancestral property by plaintiffs' father. The Court adopted the approach followed by Privy Council in the Mohammad Khalil Khan(supra).

"the mere fact that a different period of limitation is provided, cannot stand in the way of the bar under Order II Rule 2.", said the bench.

In Coffee Board v Ramesh Exports Private Ltd (2014) 6 SCC 424, the respondent purchased coffee at the export auctions and exported them to certain countries. The Coffee Board had provided for stamps system for exporting of coffee. Complaint of the plaintiff was that the defendants failed to supply the stamps which delayed exports resulting in losses. He filed two suits for damages.

The second suit was held to be barred by Order II Rule 2. The Court held that plaintiff could only succeed only by proving failure by the appellant to provide stamps. The grounds of difference in the suit were found to be as regards the amount of coffee and the date when the same was purchased. That difference by alone will not make the cause of action different.

"In both the suits the fact required to be proved by the respondent (being the plaintiff therein), to succeed in its claims was that on account of the failure of the appellant (being the defendant) to provide the required ICO stamps as assured by it, the respondent had to suffer losses. The two separate reliefs claimed by the respondent are dependent on the same fact being the omission of duty by the appellant. The grounds of disparity in the suits are the amount of coffee and the dates when the same was purchased, however it must be noted that the period between August 11, 1982 and August 18, 1982 is common to both the suits and there are no specific pleadings differentiating the same. Furthermore, the suits were filed within a span of nine days of each other".