[Force Majeure] Taking Cue From Courts: What Worked, What Didn't 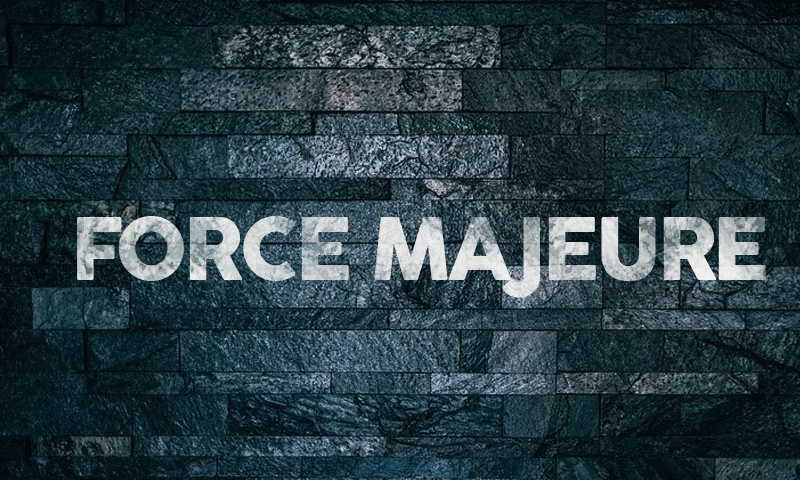 Till not so long ago 'Force Majeure' was a concept that was seldom used and largely overlooked and the force majeure clause, if incorporated in an agreement, was largely skipped over by lawyers hurrying to read a contract. All that has changed in the space of a few months and there is no concept more important now than the humble 'Force Majeure'. That the jurisprudence on Force Majeure...

Till not so long ago 'Force Majeure' was a concept that was seldom used and largely overlooked and the force majeure clause, if incorporated in an agreement, was largely skipped over by lawyers hurrying to read a contract. All that has changed in the space of a few months and there is no concept more important now than the humble 'Force Majeure'. That the jurisprudence on Force Majeure was also not particularly vast with the judgments of Satyabrata Ghose v Mugneeram Bangur Co[1] and the more recent Energy Watchdog v CERC & Ors[2] being the few judicial pronouncements offering insights as to how the said concept would be interpreted either by way of a clause in the contract in terms of Section 32 of the Indian Contract Act, 1872 or as part of the doctrine of frustration/impossibility to act in terms of Section 56 of the Indian Contract Act, 1872. For the most part though, lawyers were largely at sea as to how the Courts would consider the invocation of the said concept in the context of the nationwide lockdown brought on by the Covid 19 pandemic and the general suspension of economic activity. Few months in the lockdown and we now have a gradually evolving jurisprudence on Force Majeure as several judgments have been passed by the High Courts with regards to interpretation and applicability of the doctrine of Force Majeure. This article attempts to highlight what has worked and what has not when a party has sought to invoke the said concept in the context of Covid-19 induced Lockdown and suspension of economic activity.

The one takeaway from the way Courts have dealt with cases involving invocation of doctrine of force majeure is that there cannot be a straightjacket, universal, one-size-fits-all applicability of the said doctrine and each case where the said doctrine is sought to be invoked would be considered on its unique fact situation to render a finding as to whether the said doctrine stood attracted or not.

"The question as to whether COVID-19 would justify non-performance or breach of a contract has to be examined on the facts and circumstances of each case."

PAST PERFORMANCE /CAUSAL RELATION OF FORCE MAJEURE EVENT TO THE BREACH

In 'Halliburton' (supra), it was inter alia, held that:

"The outbreak of a pandemic cannot be used as an excuse for nonperformance of a contract for which the deadlines were much before the outbreak itself.

The general rule of thumb that emerges is that if there is prior or continuing breach by a party, then the doctrine of force majeure cannot be pressed into service to justify the same and the party would be bound by the consequences of the said breach. On the other hand, if a party can establish from record that it had been steadfast in its performance under the contract and it is only the intervening force majeure event which has made the performance of the same virtually impossible, then arguably such a party would be likely to succeed in its invocation and reliance on the force majeure clause.

EXISTENCE OF A REAL IMPOSSIBILITY TO ACT

For a successful invocation of the doctrine, one must establish that the force majeure event has made performance of the contract completely or essentially impossible.

In Standard Retail Pvt. Ltd vs GS Global Corp[4], High Court of Bombay refused to grant Petitioner's prayer of restraint qua encashment of Letters of Credit citing prevalence of force majeure conditions, inter alia, on the ground that there was not a real impossibility to act and inter alia, held :

"The Notifications/Advisories relied upon by the learned Senior Counsel for the Respondent No. 1 does suggest that the distribution of steel has been declared as an essential service. There are no restrictions on its movement and all ports and port related activities including the movement of vehicles and manpower, operations of Container Freight Station and warehouses and offices of Custom Houses Agents have also been declared as essential services."

That the various Ministries and Departments of Government of India as also those of several State Governments have issued circulars/guidelines/advisories taking into account the Covid 19 pandemic and the subsequent lockdowns and recognizing the same as a force majeure condition and providing for certain relaxations/concessions/ waivers for the said period. The said Circulars guidelines/advisories have been relied on by parties to establish that force majeure conditions were prevailing but the said contention when taken before Courts has yielded mixed results.

In MEP infrastructure Developers Ltd. v SDMC & Ors.[5], High Court of Delhi granted relief on account of existence of force majeure condition and, inter alia, relied on the Circulars issued by the government to observe as under:

"The respondent Corporation itself referred to Circular dated 19.02.2020 issued by the Ministry of Road Transport Highways (MORTH) which notified that the COVID-19 pandemic was a force majeure occurrence.

"However, in the light of a recent decision in M/s Polytech Trade Foundation Vs. Union of India & Ors. WP(C) No.3029/2020 wherein a Coordinate Bench of this Court has expressed its prima facie opinion that these very circulars and advisories issued by the Ministry of Shipping may not be binding on private parties, even this plea may not be sustainable."

In M/s Polytech Trade Foundation Vs. Union of India & Ors.[7], the High Court of Delhi while rejecting the Petitioner's reliance on advisories issued by Government, inter alia, held:

"..Thus, it is very clear from the above circulars that these are in the form of advisories and are not directory in nature and do not mandate respondent no.3 to 6 not to charge ground rent, penal charges/ demurrage etc..."

"..Moreover, the letters/guidelines/advisories also cannot intervene or interfere in a private contract which respondent no. 3 to 6 have with their customers i.e. petitioner..."

Thus, what emerges is that Government circulars/guidelines/advisories recognizing the Covid 19 pandemic would have apply where the relief sought is against a government entity but cannot be pressed into service against a private entity to compel it to give up its rights arising from a contractual arrangement.

One way to view these restrictions on invocation is to argue that the same would be violative of S 28 of the Indian Contract Act ,1872. Per contra, it could be argued that parties had agreed to impose certain conditions for invocation of force majeure and the same does not constitute an absolute restriction on enforcement of legal rights and would not be hit by S. 28. Either way one looks at it, what is important from a practical standpoint is that the invocation should ideally happen before the breach. If the invocation is post breach, it would be difficult to justify the same on account of force majeure. Though there is one exception to this rule as recognized by the High Court of Delhi in MEP Infrastructure Developers Ltd. (supra) and that exception is admission/acknowledgment of the force majeure condition by the other party itself.

That in MEP infrastructure Developers Ltd.(supra), the High Court after considering the contention of the Respondent that the Petitioner had not invoked the force majeure in time and before breach, rejected the said contention as it found that there were circulars issued of an earlier date by the government recognizing the lockdown as a force majeure event and held as under:

"The respondent Corporation itself referred to Circular dated 19.02.2020 issued by the Ministry of Road Transport Highways (MORTH) which notified that the COVID-19 pandemic was a force majeure occurrence. In effect, the force majeure clause under the agreement immediately becomes applicable and the notice for the same would not be necessary."

Thus what came to the aid of the Petitioner to save it from its tardy invocation of force majeure clause was the admission on the part of the Respondent. This, of course, will not be the situation in most cases and most opposite parties will not be so obliging and thus the rule of thumb that emerges is that a prompt invocation is favoured or at least an invocation before the occurrence of breach or contemporaneous with breach must be made in order to successfully invoke and rely on the force majeure clause.

Another factor which has weighed with the Courts has been the prejudice being caused to the opposite party by invocation of doctrine of force majeure.

"The contract terms are on Cost and Freight basis (CFR) and the Respondent No. 1 has complied with its obligations and performed its part of the contracts and the goods have been already shipped from South Korea. The fact that the Petitioners would not be able to perform its obligations so far as its own purchasers are concerned and/or it would suffer damages, is not a factor which can be considered and held against the Respondent No. 1."

In Rashmi Cements (supra), it was, inter alia, held:

"…I find that even the balance of convenience is in favour of the respondent considering its plea that it would be liable to forthwith compensate the vessel owner for the payment made by way of demurrage."

"..It would not be fair to direct the respondent to await conclusion of arbitration to receive demurrage as per the contract.."

In the coming days, jurisprudence on force majeure is sure to grow even more, and an analysis of judgments rendered so far can ensure that the Empire (read 'your party') can strike back!

(Kanika Singh is a Delhi-based lawyer, and may be reached at [email protected])