Legal And Regulatory Framework Of Drones

"Drones overall will be more impactful than I think people recognize, in positive ways to help society" - Bill GatesIntroduction Aircraft technology and aerodynamics have always captured the imagination of people. This is primarily due to urge of the humans to be air-borne and fly like birds. This fascination for flying is not new and goes back generations and specific...

"Drones overall will be more impactful than I think people recognize, in positive ways to help society" - Bill Gates

Aircraft technology and aerodynamics have always captured the imagination of people. This is primarily due to urge of the humans to be air-borne and fly like birds. This fascination for flying is not new and goes back generations and specific references to flying objects can be found even in our Indian mythology. Today, in this modern age of fast emerging technological advancements, Drones have become the latest gadgets on the block, attracting people for their airborne utility value and also their use for amusement purposes.

Before moving further, it would be pertinent to understand what these "Drones" are, in the context of both aviation as well as space. In simple words these are unpiloted air/space crafts, which are commonly referred to as "unmanned aerial vehicles" or "UAVs" in short. These Drones can also be seen as / referred to as, "flying robots", which are remotely controlled from the ground, through the use of latest technologies in hardware, embedded software and wireless / telecommunication technology. The latest Drones have onboard sensors, global positioning systems, audio / video devices and cameras, depending on the utility for which they are meant. Since these are airborne and unmanned (except in the case of space-crafts), there are various regulatory challenges for their manufacturing, trade, import and usage. In this article we will be considering these regulatory challenges on how to handle and scale such challenges.

In this context, we may also understand as to what is meant by the 'art of droning', which is the new talk of the town. Art of droning is the value addition drones have made in our lives. It is this technological innovation with whose help we have been able to deal with natural disasters, border security and rescue operations to even containing COVID-19 pandemic[1]. The importance of drones has also been highlighted in the case of Vishvanath Singh v. State of Uttarakhand & Ors.[2], wherein the Uttarakhand High Court directed the State to deploy drones and CCTV cameras to detect poaching and illegal mining activities which were rampantly being held in Corbett National Park and Rajaji National Park.

While some people are exploring the drone age with their imagination and contemplating its utilities, others are relishing it as a leisure. The world of drones is the new dawn of technology, a new prism of hope in the technological space, for both peaceful as well as wartime endeavors. Thus, the way developments are happening in this zone and the way governments and even common people are embracing it, those developing and operating such technology will flourish and those who are not able to see the obvious will remain obscure in this fast changing technological land scape[3].

Recently, India legalized flying of drones to encourage and promote digital evolution.[4] The new drone policy has laid down requirements for registration of drones with Government's digital sky portal.[5] The policy also states that, those without digital permission, will not be able to takeoff drones, as per the 'No Permission No Takeoff' policy of Government of India. As on date 19553 digital permissions have been given by the Directorate General of Civil Aviation, Government of India for operation of drones in India.[6] Further, Drone task force has also been established to tap upon the potential use of drones. Despite these positive developments, many in the industry have raised concerns regarding bugs and errors found in the Application Program Interfaces (API's) of these Drones. Therefore, the new generation drones are still evolving and we are yet to see many a mile stone in this art of droning both in terms of API's and the legalities involved.

Today, drone technology is being actively used as a platform for various purposes including aerial photography, infrastructure asset maintenance, insurance, bomb detection, monitoring forests, border surveillance[7], intelligence gathering, photography, demographical studies etc. The most interesting usage in the recent past, is the reported use in China of drones, to determine the body temperatures of the population in a demographical area, in order to fight the COVID-19 epidemic. These are also being extensively used by the Indian Army for all its operations apart from border surveillance. Similarly there have been reports that Drones have been used in Dubai for sanitization of the city in the wake of COVID-19. Further, more than 100 drones were used for monitoring the Ganga Mahakumbh congregation in 2019 at Allahabad. In fact, in the last few years, Drone flying has become a fashion statement. Many corporations have started using it for their potential commercial gains. For instance, a few years back, Zomato acquired Tech Eagle Innovations, a drone startup to mirror Amazon Air's delivery services in India[8]. The technological pundits are already neck deep in their research, to ensure usage of drones for home deliveries by the app-based retailers. Therefore, it would be interesting to see drone based home deliveries, in the foreseeable future.

Why is learning about drones and their significance important for Indians?

The new India is dynamic, technology driven and restless. Drones have thus gained popularity amongst young photographers, visionary entrepreneurs and tech enthusiasts. The growing trend of investments in this emerging technology and its potential usage has therefore led to the emergence of many legal issues. Some of these burning issues have been briefly dealt with in this article.

It is clear from the recent developments that while the Government is attempting to create a regulated but conducive eco-system for drone technology, many legal issues are surfacing due to the changing dynamics. A drone as a matter of fact is not anymore a fashion statement, rather a serious business proposition for angel investors and technology entrepreneurs. Considering the issues of privacy, surveillance and third party insurance, we wouldn't be surprised if in near future we see an airway tunnel being made exclusively for drones to deliver products to consumers.

Drone Categories in India; Registration is mandatory for all except Nano category. Further, some of the features the drones must have to fly in India include GPS, Return to home (RTH), Anti-Collusion Light, ID plate, flight controller with data controlling capability, RF ID and SIM/ No permission No Takeoff (NPNT)[24] 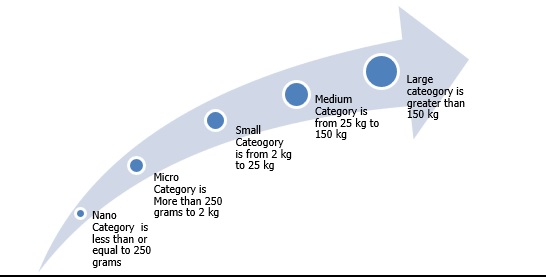 (Srinivas Kotni is the Managing Partner at the law firm "Lexport" and Anurag Mehta is an Associate there. The authors may be reached at [email protected])

[5] A fascinating, one of a kind national Unmanned Traffic Management (UTM) platform that operates only after the

user registers its drones, pilots and its owners; http://www.pib.nic.in/PressReleseDetail.aspx?PRID=1544087;

[19] ITC HS for determining importability of goods into India is published by DGFT under the extant Foreign Trade Policy of India in terms of Foreign Trade Development & Regulation Act, 1992