'My Lord Or Your Honour?': How To Address Judges In India?

On 13th August 2020, an interesting exchange happened between the Chief Justice of India SA Bobde and a lawyer on how to address the Court. A lawyer addressed the bench presided by the CJI, which was hearing the cases through video conference, as 'Your Honour'. "Are you appearing before the US Supreme Court?", CJI Bobde asked the lawyer. According to CJI, the use of ' Your...

On 13th August 2020, an interesting exchange happened between the Chief Justice of India SA Bobde and a lawyer on how to address the Court. A lawyer addressed the bench presided by the CJI, which was hearing the cases through video conference, as 'Your Honour'.

"Are you appearing before the US Supreme Court?", CJI Bobde asked the lawyer. According to CJI, the use of ' Your Honour' is not Indian, but American. The lawyer submitted before the bench that there is nothing in law that prescribes address by lawyer.  It is about the practice of the court, CJI remarked.

Lawyer: "Your honour"#CJI: Are you appearing before the US Supreme Court? The use of "ʏᴏᴜʀ ʜᴏɴᴏᴜr"
is in US & not Indian SC"
Lawyer: Theres nothing in law that prescribes address by lawyers. #CJI: May not be the law, it is about practice of the court.
— Live Law (@LiveLawIndia) August 13, 2020

'My Lord', 'Your Lordship' Not Mandatory, Use Dignified And Respectable Way of Addressing

On 6 January 2014, the Supreme Court bench comprising the then CJI Justices HL Dattu and SA Bobde heard and dismissed a PIL filed by a lawyer, Advocate Shiv Sagar Tiwari who sought a ban on using the words 'my lord' and 'your lordship'. He contended that these terms are symbols of slavery should be strictly prohibited to be used in the courts throughout India as it is against the dignity of the country."

On 6 May 2006, the Bar Council of India published its resolution in the Gazette of India which read as follows: 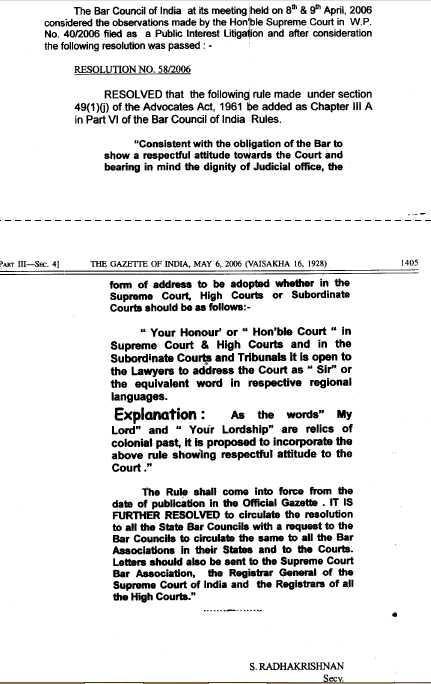 Section 49 of the Advocates Act empowers the Bar Council of India to make Rules. Exercising these powers, the Council resolved as follows:

Consistent with the obligation of the Bar to show a respectful attitude towards the Court and bearing in mind the dignity of Judicial Office, the form of address to be adopted whether in the Supreme Court, High Courts or Subordinate Courts should be as follows: "Your Honour" or "Hon'ble Court" in Supreme Court & High Courts and in the Subordinate Courts and Tribunals it is open to the Lawyers to address the Court as "Sir" or the equivalent word in respective regional languages.

Explanation: As the words "My Lord" and "Your Lordship" are relics of Colonial post, it is proposed to incorporate the above rule showing respectful attitude to the Court.

Thus the Rule [Part VI, Chapter IIIA of Bar Council of India Rules] prescribe the use of "Your Honour" or "Hon'ble Court" in Supreme Court & High Courts and "Sir" or equivalent words in the Subordinate Courts and Tribunals. The explanation further states that the words "My Lord" and "Your Lordship" are relics of Colonial post.

It is evident from the above Rule that the Bar Council of India has disapproved the use of "My Lord" and "Your Lordship" and has prescribed the use of "Your Honour" or "Hon'ble Court" or "Sir" to address judges.

Interestingly, this resolution was taken by Bar Council after considering the observations made by the Supreme Court while hearing a PIL filed by Progressive & Vigilant Lawyers Forum. However, the judgment/order dismissing this PIL on 6 January 2006 could not be accessed. Reportedly, the Court had dismissed the PIL observing that it was a matter to be decided by the BCI as how the Judges should be addressed.

Following this, in 2007, the Kerala High Court Advocates' Association had unanimously resolved to stop addressing judges as 'My Lord' or 'Your Lordship'.

Justice K. Chandru of Madras High Court had in 2009 asked the lawyers to refrain from using 'My Lord'. Earlier this year, Justice S Muralidhar had formally requested the lawyers that they may try and avoid addressing him as 'your lordship' or 'my lord',". The Chief Justice of Calcutta High Court, Thottathil B. Nair Radhakrishnan had recently addressed a letter to the officers of district judiciary including members of Registry, expressing his desire to be addressed as "Sir" instead of "My Lord" or "Lordship".

Last year, Rajasthan High Court issued a notice requesting  lawyers and those appearing before the judges to desist from addressing the Hon'ble Judges as "My Lord" and "Your Lordship". The notice was issued following a unanimous resolution taken by the Full Court in a meeting held on 14th July. Such move was taken "to honor the mandate of equality enshrined in the Constitution of India".

Lawyers Use 'Your Lordships'  even in pleadings

Though 'Your Lordship' is a common form of addressing Judges of Supreme Court and High courts even now, despite the BCI Rule disapproving it, there is a practice among lawyers to use 'Your Lordship' in the prayer portion of writ petitions as well. Such a trend is seen in some High Courts.

Senior Advocate Harish Salve appeared in the International Court of Justice last year and as per the transcript available, it is seen that he had mostly addressed the court as 'honourable President and honourable Judges'. There is no use of terms like 'My Lord' or 'Lordship' at all. As the Chief Justice SA Bobde pointed out, use of 'Your Honour' is prevalent in the Supreme Court of United States even today. To illustrate, the argument transcripts in the case of Little Sisters of the Poor vs. Pennsylvania uploaded in the SCOTUS portal can be referred to.  General Francisco started addressing the Court by 'Mr. Chief Justice, and may it please the Court.' The word 'honor' was used 45 times. During the hearing of Trump vs. Vance, the word 'honor' was used 60 times. The Australian High Court itself has described the way to address its judges. It states that they should be addressed as 'Your Honour' while they preside the benches. Federal Court judges are also supposed to be addressed as 'Your Honour'.

Judiciary.uk, an official web portal of Justice Department of United Kingdom, describes the the different ways to address members of the judiciary. It says that the judges of Supreme Court, Court of Appeals, High Court is supposed to be addressed as  'My Lord' or 'My Lady'. Circuit judges are to be addressed as 'Your Honour' and District Judges and Magistrates and other judges as  'Sir or Madam'.

The practice in Pakistan is more or less same as that in India. There is a judgment delivered in 2012 by Lahore High Court which dealt with a petition filed by a lawyer named Malik Allah Yar Khan seeking a declaration that no one is allowed to address a judge as "My Lord" or "your Lordship". He contended that such terms are part of British Colonial System and are unslamic as the only God Almighty is the Lord and no man can be the Lord of any man.

Addressing these contentions, Justice Nasir Saeed Sheikh pointed out that no courts or judges have ever issued any command, direction or instruction to the members of the legal fraternity to necessarily address the honourable Judges of the Superior Courts with the terms "My Lord" or "Your Lordship". The judge, taking note of the dictionary meanings of the term 'lord' said that even the English Judicial System practices the use of titles as "My Lord" or "Your Lordship" in recognition of the known ability, nobility and learning of the office holders of the higher judiciary. None of the books of literature or legal background even hinted that the honourable Judges who are addressed with the title of "My Lord" or "Your Lordship" are imagined or thought to be involving the touch of Godly attributes, the judge observed.

"If the learned members of the Bar who are not directly ordained by the honourable Judges of the Superior Courts to address them in particular manner, adopt the ceremonial and historical form of address to the honourable Judge by using the word "My Lord" or "Your Lordship", the concept of freedom of thoughts of speech as enunciated in our Constitution of 1973, fully gives protection to such a practical exercise. Such practice of the learned members of the Bar cannot be directed to be discontinued by an order passed by this Court as prayed for by the learned counsel for the petitioner on religious grounds", the judge said.

Countering the petitioner's suggestion that the word 'Sir' is to be used, the court observed that 'Sir' also has a colonial touch. The court also dismissed the objections raised by the petitioner against the practice of bending of heads by the lawyers before the Judges. The Court also dismissed the objection against placing of the seats of the Judges at a higher pedestal in the Courts observing that it is only for the symbolic display of the authority of Courts different from the ordinary people which the Courts enjoy with respect to the persons to whom a direction is intended to be issued by the Courts.

May It Please 'Your Honour'

It is seen that many countries use the term 'Your Honour' to address the Judges of superior courts. The terms 'My Lord' and 'Your Lordship' is seen to be still used in United Kingdom and a few other countries. Though there is no absolute legal bar against usage of 'My Lord' and  'Your Lordship' in India, the Courts and the judges must encourage the hesitant lawyers to stick to the prescription of 'Your Honour' by Bar Council of India. The lawyer community should be made to realize that it is not really necessary to use such colonial titles to please the Indian Courts and the judges that man them.