The Bank Nationalization Ordinance : A Remembrance On Its 51st Anniversary 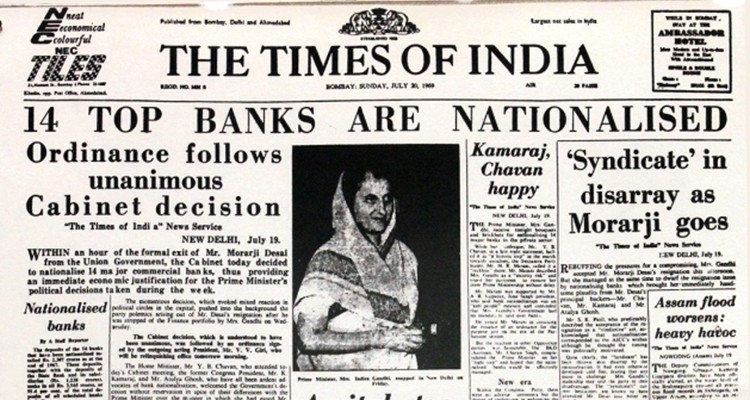 It was 51 years ago, on 19th July ,1969, that the nation heard the news of an unanticipated ordinance that nationalised the entire banking sector of India in a jiffy. India at that time was ruled by Indira Gandhi and she presented the Banking Companies ( Acquisition and Transfer of Undertaking ) Ordinance 1969 to the public through a radio broadcast.The ordinance ensured...

It was 51 years ago, on 19th July ,1969, that the nation heard the news of an unanticipated ordinance that nationalised the entire banking sector of India in a jiffy.

India at that time was ruled by Indira Gandhi and she presented the Banking Companies ( Acquisition and Transfer of Undertaking ) Ordinance 1969 to the public through a radio broadcast.

The ordinance ensured unmatched dominance of state's control in the entire banking sector of the nation.

According to Sorabjee and Datar [1], "The ordinance was a closely guarded secret and, at one stroke, more than 75% of the banking sector came under state control. The entire paid -up capital , all assets and liabilities , contracts , and agreements were to vest with the central government. All directors of the fourteen nationalised banks would vacate their respective offices but services of other employees were to continue with the nationalised banks. The most shocking part of the ordinance was the second schedule which spelt out the compensation that was to be paid."

1. There must be an agreement to fix the amount of compensation.

The unexpected move of nationalization resulted in the extreme loss of position and investments for the share holders of the banks, which are nationalized. R.C.Cooper,  who was the director of the Central Bank of Indian ,Ltd. approached the Apex Court by engaging legendary jurist Nani Palkhivala, as his counsel. Cooper challenged the validity of the Banking Companies ( Acquisition and Transfer of Undertaking ) Ordinance 1969.

Rustom Cavasjee Cooper , born in 18th August 1922, was an accountant as well as a tax practitioner. He acted as a non-executive chairman of the Times of India Group and Vice Chairman of Bharathiya Vidya Bhavan and Indian red Cross Society.

At the time of the promulgation of banking ordinance he was serving as the director of the Central Bank of Indian ,Ltd. also had shares in other banks including Bank of India and Bank of Baroda.

He also acted as the General Secretary of the Swartantra Party

During the mid 1970's, he had moved to Singapore and held the position of chairman of Coopers Private Limited. He was also the foremost representative of the Zorastrian faith on the Government of Singapore's Inter Religious Organisation.

R.C Cooper filed the challenge before the court as a share holder of the bank, which was subsequently nationalized by the ordinance.

He had the satisfy the Court of the primary requirement of locus standi.  Cooper took the stand that he has every right to approach the court as the impugned ordinance had stopped his right to receive the profit and dividend of the shares that he held as a share holder of the bank. The impugned ordinance acted created a grave violation of his rights to carry on business as the share holder of the bank, contended by Cooper.

The central government, though the Attorney General opposed this contention of Cooper by stating that there is no locus standi for Cooper since  a shareholder, depositor or director was not entitled to approach the court for the violation of the rights of a company.

The Court accepted the maintainability of the petition filed by Cooper by holding that ,Cooper was challenging the infringement of his own fundamental rights in the capacity as a shareholder, and not the violation of the rights of the bank.

Subsequently during the proceedings before the court the parliament had given green signal to the ordinance and created Banking Companies ( Acquisition and Transfer of Undertaking ) Act, 1969

The other major Challenges involved were :

The final outcome of the decision in R.Cooper(Supra) was a partial relief to the government. The court upheld the rights of the government to nationalize banks.

But in full context, the decision never fully favors the government. The court struck down the scheme of the compensation laid under the Act on the ground that, the compensation is not provided based on relevant principles. The Constitutional provision that the petitioner had utilized in establishing his case was under Article 31, which was later repealed by the Constitutional (forty fourth) Amendment Act, 1978.

Article 31(2), prior to its repeal, stated that, "No property shall be compulsorily acquired or requisitioned save for a public purpose and save by authority of a law which provides for acquisition or requisitioning of the property for an amount which may be fixed by such law or which may be determined in accordance with such principles and given in such manner as may be specified in such law; and no such law shall be called in question in any court on the ground that the amount so fixed or determined is not adequate or that the whole or any part of such amount is to be given otherwise than in cash."

In the aftermath of the  R.C.Cooper decision the 25th Constitutional (Amendment) Act,1971 came in to force which cut down the right to property under Article 31 and justified the acquisition of private assets and property under the label of "public use".The amendment replaced the word 'compensation' under article 31(2) with "amount" and this favoured the government to fix an "amount" based on their vested agendas.

Later, Article 31 itself was repealed by 44th Constitution Amendment.