Use Of Mobile While Driving An Offence: 2018 Kerala HC Judgment Vs. 2019 Amendment Of MV Act 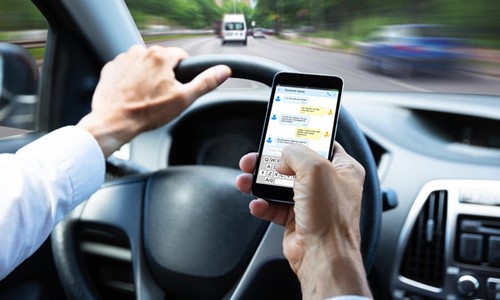 2019 Amendment of MV Act removed Basis of Kerala HC Judgment that had held that Section 118(e) cannot be invoked to prosecute people who use Mobile while driving.

A news report about a judgment delivered by Kerala High Court in March 2018 is seen going rounds recently in the Social Media. In the said judgment [Santhosh MJ vs. State of Kerala], the High Court had held that, in the absence of a statutory provision to hold that use of mobile phone while driving or riding a vehicle would amount to a dangerous act or it affects public safety, it is not possible to invoke Section 118 (e) of the Kerala Police Act (KP Act).

But even after the said judgment, driving a vehicle and simultaneously using a mobile phone can amount to a penal provision coming under Section 184 of the Motor Vehicles Act, 1988 (MV Act) or even can be termed as rash and negligent driving which may endanger life or cause injury or harm to any other person as contemplated under Section 279 of IPC. The Court, while delivering the said judgment, was only concerned with the contention that the act of using Mobile phones while driving will not attract Section 118 (e) of the Kerala Police Act.

Whoever, drives a motor vehicle at a speed or in a manner which is dangerous to the public or which causes a sense of alarm or distress to the occupants of the vehicle, other road users, and persons near roads, having regard to all the circumstances of case including the nature, condition and use of the place where the vehicle is driven and the amount of traffic which actually is at the time or which might reasonably be expected to be in the place, shall be punishable for the first offence with imprisonment for a term which may extend to one year but shall not be less than six months or with fine which shall not be less than one thousand rupees but may extend to five thousand rupees, or with both, and for any second or subsequent offence if committed within three years of the commission of a previous similar offence with imprisonment for a term "which may extend to two thousand rupees", the words "of ten thousand rupees".

"Explanation.—For the purpose of this section,— (a) jumping a red light; (b) violating a stop sign; (c) use of handheld communications devices while driving; (d) passing or overtaking other vehicles in a manner contrary to law; (e) driving against the authorised flow of traffic; or (f) driving in any manner that falls far below what would be expected of a competent and careful driver and where it would be obvious to a competent and careful driver that driving in that manner would be dangerous, shall amount to driving in such manner which is dangerous to the public.".

(Note: Underlined portion is the change brought to the section by 2019 amendment)

So now, whoever 'uses' a handheld communication device while driving, can be charged under Section 184 of the MV Act.

In Santhosh MJ it was held that, unless the 'act' of accused causes danger to public or failure in public safety, the penal provision under Section 118(e) will not be attracted. It was further held that, in the absence of any statutory provision which prevents use of a mobile phone while driving a motor vehicle, it may not be possible to infer that danger will be caused in the process. The basis of the judgment that held 118(e) of the KP Act cannot be invoked for use of mobile while driving, was the absence of any statutory provision to hold that use of mobile phone while driving or riding a vehicle would amount to a dangerous act or it affects public safety.

Now the basis of the judgment is removed by a subsequent amendment of the MV Act, which has specifically incorporated a provision that use of handheld communication device shall amount to driving in such manner which is dangerous to the public.

Any person who knowingly does any act which causes danger to public or failure in public safety; or shall, on conviction be punishable with imprisonment for a term which may extend to three years or with fine not exceeding ten thousand rupees or with both.

Thus in Kerala, if one uses a mobile phone while driving he is not only risking a fine up to five thousand rupees [under the MV Act], but also can be prosecuted under Section 118(e) of the Kerala Police Act. Further, by doing so, he is risking others' lives as well.

So, to sum up: Please don't use mobile while driving.