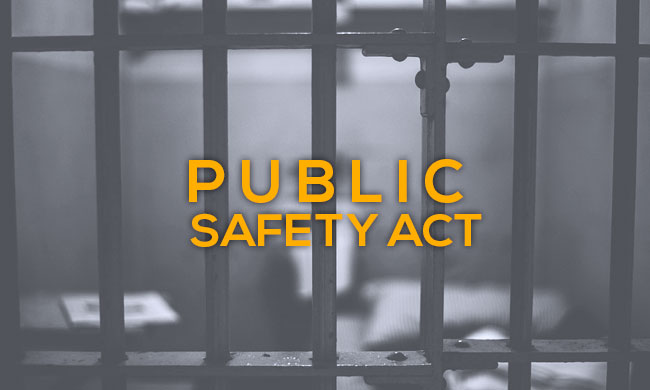 It is reported that National Conference leader and former Jammu and Kashmir Chief Minister Farooq Abdullah has been detained under the Jammu and Kashmir Public Safety Act.This move happened shortly before the Supreme Court was slated to hear the habeas corpus petition filed by MDMK leader Vaiko seeking release of Abdullah. Abdullah was served the notice under the PSA at 1 AM on Monday and...

This move happened shortly before the Supreme Court was slated to hear the habeas corpus petition filed by MDMK leader Vaiko seeking release of Abdullah. Abdullah was served the notice under the PSA at 1 AM on Monday and his Gupkar road house declared a jail, reported the PTI.

Though the formal order of detention has been passed only now, he has been under house arrest since August 5, the day when President issued the first order under Article 370 to revoke the special status of Jammu and Kashmir.

On September 11, the J&K HC allowed two NCP leaders to meet Abdullah on condition that they should not talk to media about the meeting. This order of the HC recognizes the fact that Abdullah was under restrictions, even before the issuance of formal detention order.

What is J&K Public Safety Act?

The detention order has been passed under the Jammu and Kashmir Public Safety Act 1978, which was introduced by the government led by Sheikh Abdullah (Father of Farooq Abdullah). The Act was enacted  "in the interest of the security of the State and public order".

It contains provisions for designating protected and prohibited areas, prevention of circulation of documents in the interests of communal harmony etc.

Section 8 of the Act deals with the power of authorities to detain persons.

The Government can order the detention of a person :

As per the definition given in Section 8,"acting in any manner prejudicial to the maintenance of public order" means

(i)promoting, propagating, or attempting to create, feelings of enmity or hatred or disharmony on grounds of religion, race, caste, community, or region;

(iii)attempting to commit, or committing. or instigating, inciting, provoking or otherwise abetting the commission of mischief within the meaning of section 425 of the Ranbir Penal Code where the commission of such mischief disturbs, or is likely to disturb public order;

The District Magistrates and Divisional Commissioners are also empowered to authorize detention.

As per Section 13(1), the authority making the detention should communicate to the detenu the reasons of detention. This is to enable the detenu to make a representation against the order of detention in exercise of the fundamental right guaranteed under Article 22(5) of the Constitution of India.

The maximum period of detention in the case of persons acting in any manner prejudicial to the security of the State is two years.

In case of a person acting prejudicial to the maintenance of public order, the maximum period of detention is 12 months.

Within four weeks of passing a detention order, the Government has to refer the case to an Advisory Board, which consists of a Chairperson, who is or has been a Judge of the High Court, and two other members who are, or have been, or are qualified to be appointed as Judges of the High Court.

The Advisory Board has to give its opinion within 8 weeks of detention order.

If the Advisory Board opines that there are sufficient causes for preventive detention, the Government can keep the person under detention for such period as it thinks fit, subject to the maximum limit.

Can detention be challenged?

The Advisory Board is supposed to examine if there are sufficient reasons for preventive detention.

It is pertinent to note that the the detenu has no right to engage a legal practitioner before the Advisory Board.  The Advisory Board can also decide if the disclosure of grounds of detention to the detenu will affect public interest.

The detenu is not entitled to the report of the Advisory Board, if the Board decides that it should remain confidential.

The detention can be challenged in habeas corpus petitions filed before High Court under Article 226. However, the scope of challenge is limited to grounds of procedural violations.

If there is non-application of mind by the detaining authority, or non-communication of the grounds of detention to the detenu, the High Court can quash the detention order as illegal.  There are cases of HC interfering with detention order on the ground that authority failed to inform the detenu of his right to make representation to the detaining authority and the government against the order (Shoib Ahmed Czor v State of J&K).

It is important that the District Magistrate forms independent opinion regarding the necessity of ordering preventive detention. If the Magistrate merely copies the report of the police, it will be a case of non-application of mind.  The HC has quashed detention orders on the ground of non-application of mind, after finding that the order was a verbatim copy of the police dossier(Mohd Rafiq Ganie v State of J&K).

Non-supply of relevant material documents to the detenu is also a ground for setting aside detention order(Bilal Ahmed Dar v State of J&K).

The grounds of detention are not to be formulated in shorthand, or in a language of abbreviations or acronyms only known to the detaining authority.(Tanveer Ahmed v State of J&K)

However, the High Court will not undertake substantive review of the merits of the detention. The Courts generally refrain from reviewing the "subjective satisfaction" formed by detaining authority regarding cause of detention, except there are patent illegalities or unreasonableness.