What Is 'Zero FIR' And When Can Police Register 'Zero FIR'? 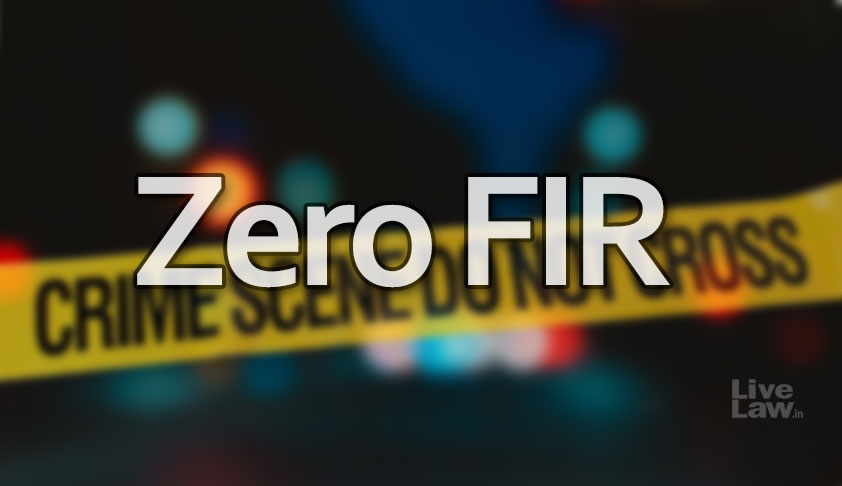 In the aftermath of the recent incident that happened in Hyderabad, where a young lady was brutally raped, smothered and burnt by four men; a question arose about the legality of refusal to register the First Information Report (FIR) by the Shamsabad police by saying that the place of incident was outside their jurisdiction.The Cyberabad police commissioner on Saturday suspended three cops...

In the aftermath of the recent incident that happened in Hyderabad, where a young lady was brutally raped, smothered and burnt by four men; a question arose about the legality of refusal to register the First Information Report (FIR) by the Shamsabad police by saying that the place of incident was outside their jurisdiction.

The Cyberabad police commissioner on Saturday suspended three cops of Rajiv Gandhi International Airport (RGIA) police station, including a sub-inspector, for their alleged inaction after the veterinarian's sister approached them for help. The commissioner also said that,

"All the officers of Cyberabad Police have been once again instructed to register cases irrespective of jurisdiction whenever a complaint related to cognizable offence is received in the police station."

A Constitution Bench of the Supreme Court in Lalita Kumari v. Govt. of U.P held that registration of First Information Report is mandatory under Section 154 of the Code of Criminal Procedure , if the information discloses commission of a cognizable offence.

Normally, an FIR is registered by a serial number in the police station having territorial jurisdiction to investigate the Crime. A Zero FIR can be registered in the Police station where the information about a Cognizable Offence is received,  irrespective of whether it has got territorial jurisdiction or not. Zero FIR can only be registered but not numbered. Such unnumbered FIR is then forwarded to the concerned police station where it gets numbered and then proceeded for investigation. Justice Verma Committee Report recommended the provision of Zero FIR, after the December 2012 gang rape of a 23- year old girl in Delhi.

The same complaint would then be generated at the nearest police station and a copy would also be provided to an ombudsman office located in every district. It will still be the case that an FIR cannot be registered anonymously and the individual who has registered an FIR online will then have to go to any police station to verify his identity and the FIR. [Justice Verma Committe Report]

In State of A.P. v. Punati Ramulu and others, the informant went to the nearby police station from the scene of the occurrence and contacted the constable to draft the report addressed to the Circle Inspector of Police. He was the eye witness who is the nephew of the deceased and had accompanied the deceased when the latter went to realize debts from the villagers. The police constable at the police station refused to record the complaint on the ground that the police station had no territorial jurisdiction over the place of offence. The court held that, there was certainly a dereliction of duty on the part of the constable because, any lack of territorial jurisdiction should not have prevented the constable from recording information about cognizable offence and forwarding the same to the police station having jurisdiction over the area in which the crime was said to have been committed.

2. In Satvinder Kaur v. Govt. of NCT, Delhi, the Supreme Court held that,

(i) The Station House Officer (S.H.O.) has statutory authority under Section 156 of the Criminal Procedure Code to investigate any cognizable case for which an FIR is lodged.

(ii) At the stage of investigation, there is no question of interference under Section 482 of the Criminal Procedure Code on the ground that the investigating Officer has no territorial jurisdiction.

(iii) After investigation is over, if the Investigating Officer arrives at the conclusion that the cause of action for lodging FIR has not arisen within his territorial jurisdiction, then he is required to submit a report accordingly under Section 170 of the Criminal Procedure Code and to forward the case to the Magistrate empowered to take cognizance of the offence.

3. In the case of Ramesh Kumari v. State (NCT of Delhi) And Ors, the Court held that, in case, an officer-in-charge of a police station refused to exercise the jurisdiction vested upon him to register a case on the information of a cognizable offence reported and thereby violates the statutory duty cast upon him, the person aggrieved by such refusal can send the substance of the information in writing and by post to the Superintendent of Police concerned who is satisfied that the information forwarded to him discloses a cognizable offence, should either investigate the case himself or direct an investigation to be made by any police officer subordinate to him in the manner provided by Section 154(3) of the Criminal Procedure Code.

Even though the Ministry of Home Affairs (MHA) had issued multiple advisories since 2013 to the State Governments and Union Territories on mandatory registration of the FIRs on cognizable offences, irrespective of the territorial jurisdiction of the complaint, the police stations were given only 'oral instructions' regarding the same. Relying on these advisories issued by the MHA, the division bench of the Karnataka High Court, on 19 September 2019, on the basis of a PIL petition filed by Adv. S. Umapathi complaining about the non-registration of FIRs on the ground of territorial jurisdiction, issued following directions in the order which may be issued by the State Government:

a) Even if the alleged offence has been committed outside the territorial jurisdiction of the Police station, FIR shall be still registered and the same shall be transferred to the appropriate Police station.

b) The Police officers should be clearly informed that the failure to comply with the direction of registration of FIR and receipt of information about cognizable offence may invite prosecution of the Police officer under section 166-A of Indian Penal Code and it may also invite departmental action against them.

Inspite of the Justice Verma Committee report and also the multiple advisories issued by the Ministry of Home Affairs on the registration of Zero FIR, the police are still reluctant to register a case of cognizable offence especially in cases relating to heinous crimes against women. There is a need for strict law, to take action against the police who does not adhere to the procedure of filing a Zero FIR instead of reiterating the law to the police force only after such horrific incidents take place. Public at large should also be given precautionary awareness about this provision and the procedures involved.