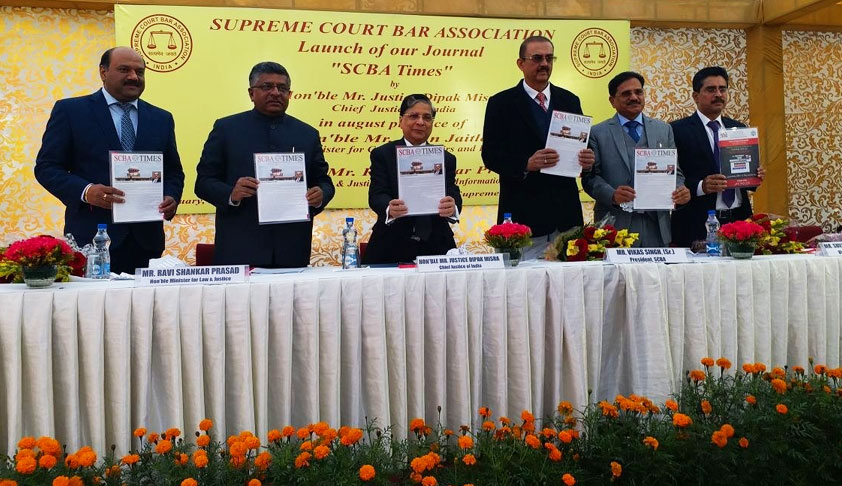 The occasion was graced by the presence of Chief Justice Dipak Misra as the chief guest and Union Minister for Law and Justice, Electronics and IT Ravi Shankar Prasad as the guest of honour. The event also saw in attendance Supreme Court Justice Madan B.Lokur, Justice DY Chandrachud, Justice UU Lalit, Justice Kurian Joseph and Justice Ashok Bhushan.

Chief Justice Misra described the SCBA Times as one which is “not an ordinary journal”, but symbolic of “recognition and recollection”. Referring to the ‘obituaries’ in the journal dedicated to judges, advocates and legal scholars, he regarded the same as the source of recollection. The Chief Justice remarked that each issue of the journal shall be awaited by every member of the legal community who will be eager to read its content.

Comparing the journal to the health camp recently held within the court premises, Chief Justice Misra said, “The SCBA Times emphasises on a broad horizon of ideas while, at the same time, throws light on the fundamental aspects of each person.”

Ravi Shankar Prasad asked if the journal could spark off a debate on the conduct of simultaneous elections in India in view of the drain on public resources on account of multiple elections: “Every year sees at least 6-7 state elections. There are also the municipal elections. Tremendous expenditure is incurred in respect of the arrangements, security etc for each election …”

Stating that he does not wish to make a political comment, Prasad mentioned the recently-concluded elections in Himachal Pradesh and Gujarat. “In quick succession, also are the upcoming assembly elections in the states of Karnataka, Tripura and Meghalaya. These shall be followed by polls in Rajasthan, Chhattisgarh and Madhya Pradesh.”

The Union Minister also elaborated on how crucial online news platforms are.

He stressed on the contributions to the movement for rights and freedom of legal luminaries Fali S Nariman, Soli Sorabjee and the late Anil Diwan and Attorney General KK Venugopal.

SCBA president Vikas Singh advanced the assurance that the executive committee of the association shall not influence or interfere in the working of the journal’s editorial board and that the latter shall remain immune from the former.