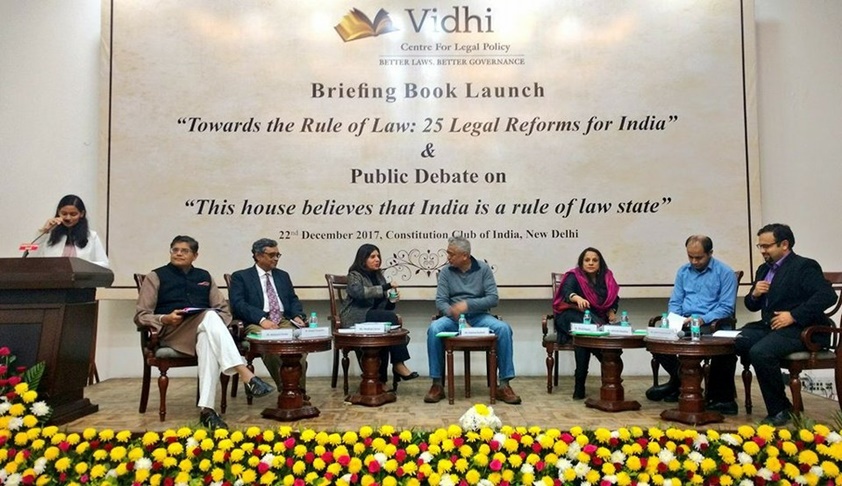 On Friday, the Vidhi Centre for Legal Policy hosted an event at the Constitutional Club of India in New Delhi to celebrate the launch of its briefing book Towards the Rule of Law: 25 Legal Reforms for India. The book launch was followed by a public debate on the motion: “This house believes that present day India is a rule of law State”.The debate, moderated by Rajdeep Sardesai,...

On Friday, the Vidhi Centre for Legal Policy hosted an event at the Constitutional Club of India in New Delhi to celebrate the launch of its briefing book Towards the Rule of Law: 25 Legal Reforms for India. The book launch was followed by a public debate on the motion: “This house believes that present day India is a rule of law State”.

The debate, moderated by Rajdeep Sardesai, consulting editor, India Today, saw the presence of Members of Parliament Baijayant Panda and Swapan Dasgupta and Supreme Court advocate Madhavi Divan as speakers in favour of the proposition.

Panda asked the audience to view the world number 66 ranking accorded to India, as a rule of law state, by the World Justice Project among over 100 countries, as “glass half full”. He continued that rule of law cannot be established at the “flick of a switch” but only by acknowledging the problems and implementing solutions. He remarked that breakdowns are inevitable in any rule of law regime, even in the Scandinavian and Norwegian countries that are highest in the wrung in the World Justice Project rankings, and insisted that India is an “improving” rule of law State.

According to Panda, being a democratic nation is India’s biggest advantage in attaining higher standards of the rule of law. He emphasised on the importance of the decriminalisation of politics, without which he rule of law in India shall remain compromised.

Dasgupta commented on how the concept of rule of law has been embroidered and re-embroidered over time to incorporate contemporary fashions and that there is not simply one, but several ideas as to what constitutes the rule of law. He further discussed the gradual descent of the rule of law into the “rule of the judges”. He continued that it is the Parliament that makes the law and that at one point of time there prevailed Parliamentary Sovereignty and a separation of powers, which is now being replaced by the system of checks and balances, judicial review and the advent of international law. He conceded that the regime of rule of law, as it exists in India, may have deficiencies, however, on the whole, “we have the rule of law and are committed to improving the existing regime of the rule of law”.

Kapila insisted that India is “politically despotic state with a thin system of contractualism” which trumps the rule of law, in view of the instances of rampant violence such as the Dadri lynching episode. “Way to get rights in India is still through fighting- anti stateism and political mobilization,” said the speaker for the opposition.

Sardesai, playing the role of the moderator, sought to inquire from Panda, “Can the fact that India is a democracy alone mean that all is well so far the objective of establishing a regime of the rule of the law is concerned?”
“Democracy is indispensable to attain a fully-enabled state of the rule of law. There are countries that adopt a policy of zero tolerance towards violence, on the one hand, but on the other, curtail basic rights such as the right of women to drive. You would not want to live in such nations. Aiding the rule of law  regime, the access to law and justice is fast improving in India. We have fast track courts that have settled rape cases in a span of six to eighteen months,” responded the MP.

“With the quality of law-making deteriorating and the Parliament losing legitimacy in the eyes of the people and the Executive being controlled by one person who all of a sudden, one day, takes the decision of demonetisation, have aberrations from the rule of law become the norm,” Sardesai asked MP Swapan Dasgupta.

“The Parliament continues to be a respected body. The Executive is also well-represented; the fact that people do not have access to it does not make it a single-man show. The question we need to ask is, ‘Where does change emanate from?’ There is a significant section of persons who attribute change to judicial activism. There are others who, unfortunately, believe that some degree of law-breaking or violence needs to resorted to highlight grievances and have them addressed. The rule of law is not merely the various statutes or the judicial pronouncements, but this entire culture,” Dasgupta replied.