A Review Of The Foreign Investment Approval Process In India 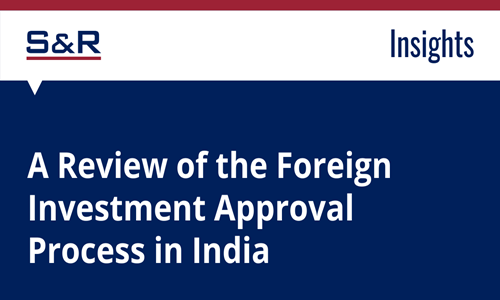 With the aim of enhancing "ease of doing business" and "promoting the principle of Maximum Governance and Minimum Government", the Government of India abolished the Foreign Investment Promotion Board ("FIPB") on May 24, 2017. In its place, the relevant administrative ministry/department in consultation with the Department for Promotion of Industry and Internal Trade ("DPIIT") are...

With the aim of enhancing "ease of doing business" and "promoting the principle of Maximum Governance and Minimum Government", the Government of India abolished the Foreign Investment Promotion Board ("FIPB") on May 24, 2017. In its place, the relevant administrative ministry/department in consultation with the Department for Promotion of Industry and Internal Trade ("DPIIT") are now directly responsible for processing applications for foreign direct investment ("FDI") in India in sectors that require prior approval of the Government.

The move was expected to make the process of obtaining FDI approval faster and more efficient. This note briefly discusses the current framework and considers areas for improvement.

After the abolition of the FIPB, the DPIIT issued a standard operating procedure ("SOP") for processing FDI proposals with guidelines, including detailed timelines, to ensure uniformity of approach across sectors. The SOP identified eleven (11) administrative ministries/departments (the "Competent Authority") for sectors in which FDI requires the prior approval of the Government. The SOP cautioned that the erstwhile inter-ministerial review must not be replicated and that the new approval regime needs to be "simpler in execution and expeditious in disposal".

Briefly put, an application for FDI approval is required to be filed online on the Foreign Investment Facilitation Portal and thereafter, the DPIIT identifies and e-transfers the proposal to the relevant Competent Authority within two (2) days of the online filing. In addition, the DPIIT also circulates the proposal for comments to the Reserve Bank of India ("RBI"), the Ministry of External Affairs ("MEA") and in case of proposals requiring security clearance, the Ministry of Home Affairs ("MHA"). The SOP specifically provides that consultation with any other ministry/department would require justification and approval of the Secretary concerned. Pursuant to a clarification issued by the DPIIT in October 2017, circulation of the FDI proposal to the Department of Revenue for comments was specifically discontinued (except with approval of the Secretary, as stated above).

Under the SOP, the Competent Authority is required to approve or reject an FDI proposal within eight (8) weeks or where security clearance is required, within ten (10) weeks, from the date of receipt of the FDI application (in each case, excluding the time taken by the applicant to provide clarifications). For this purpose, a further detailed sub-timeline has been specified, for example, initial scrutiny and request for relevant additional information/documents from the applicant within one (1) week of receipt, comments from the RBI, the MEA and other concerned ministries/departments within four (4) weeks of receipt, and comments from the MHA within six (6) weeks of receipt. The SOP specifies that where comments are not received within the specified time period, the concerned ministry/department (except the MHA, which may inform the Competent Authority of any expected delay in time frame) will be deemed to have no comments.

Although the SOP prescribes such detailed timelines and contemplates involvement of only relevant stakeholders in the FDI approval process to ensure speedy disposal of FDI applications, in practice, the FDI approval process takes significantly longer. Often, the FDI approval has remained outstanding while other requisite approvals (such as competition approval) are received earlier. Reasons for this seem to include time taken by the various ministries/departments to provide their comments to the Competent Authority and the complexity of the FDI regime and the foreign exchange regulations.

Given the impact that delays in the FDI approval process can have on transaction timelines and consequently, on the commercial dynamics of a transaction, the Competent Authority and the other ministries/departments consulted on the proposal should endeavor for strict adherence to the timelines specified in the SOP. For this purpose, the Competent Ministry could, if not already done, initiate a simultaneous review and process the FDI application even while feedback from the other ministries/departments remains outstanding, so that approval can be issued immediately upon receipt of their comments and, where required, receipt of additional information/documentation from the applicant, in accordance with the timelines prescribed in the SOP. If ministries/departments do not respond by the deadline specified in the SOP, the Competent Authority should presume that they have no comments, in line with the SOP.

Further, the longer it takes to process an FDI application, the greater are the chances that there would be, for example, a change in the board of directors of the investor or investee (requiring re-initiation of the security clearance process) or a change in the case officer in the Competent Authority (possibly resulting in additional time for the officer to gain familiarity with the application and repetition of information requests)– in either scenario, this could further delay the FDI approval process which threatens the "ease of doing business" principle to which the Government is committed.

Typically, before making an investment decision, investors seek guidance on the time required for various regulatory approvals. Under the SOP, the DPIIT and each of the Competent Authorities are required to maintain a database of the proposals received, comprising details such as date of receipt, investor and investee company details, volume of foreign investment involved, and date of grant of approval/rejection. However, this database is not publicly available. Further, once an FDI application is filed on the Foreign Investment Facilitation Portal, the exact status of the pending application cannot be ascertained clearly from the portal.

The unpredictability and uncertainty regarding the timing of the FDI approval may have an impact on deal-making – for example, foreign investors could be deterred from making investments in the country, sellers/targets may be incentivized to enter into transactions with domestic investors rather than foreign investors in the interest of deal certainty and timing and internal group restructurings are also problematic and time-consuming if FDI approvals are required.

To enable parties to accurately assess transaction timing and viability, the time period involved in obtaining an FDI approval should be predictable and relevant data should be available. Adequate data needs to be made available on a periodic basis for parties to respond effectively to substantive queries, and more generally to enable parties to estimate the time taken for FDI applications in practice. The Government could consider providing a public database on the lines of the database that the DPIIT and each of the Competent Authorities are required to maintain under the SOP. In addition to the data mentioned above, the database could also cover any policy issues that were required to be considered in a particular application and the Government's conclusion in respect of such issues. This would, apart from helping investors assess approval timelines, also ensure transparency and accountability of the various Competent Authorities involved in the FDI approval process and would help in monitoring adherence to timelines. Such an initiative would boost investor confidence immeasurably.

While certain departments (such as the DPIIT, the Department of Economic Affairs and the Department of Telecommunications) have already set up separate FDI divisions, newspaper reports indicate that the Government is planning to set up separate divisions in the other ministries/departments (such as the Department of Pharmaceuticals) to focus on FDI – this is a welcome move. Keeping in mind the complex and evolving nature of the FDI regime in India, this move should be coupled with regular familiarization programs for officers handling FDI proposals to ensure that they are well-versed with applicable regulations and better prepared to examine investment structures contemplated in FDI proposals.

The Government's other initiatives, such as Invest India, the National Investment Promotion and Facilitation Agency promoted by the DPIIT, which is assisting the Government in reviewing past approved cases of FDI and has been reaching out to investors for feedback on issues faced during the FDI approval process, will also help improve investor sentiment.

A number of welcome measures have already been adopted – for example, the involvement of the relevant ministry which is familiar with the sector and creation of FDI wings within ministries dedicated exclusively to FDI applications. With effect from October 15, 2019, The government has also obtained the power to specify rules relating to FDI through non-debt-instruments in consultation with the RBI. However, based on the experience of the last three years, certain significant course corrections continue to be required.

As the COVID-19 situation rapidly evolves, borrowing costs are expected to increase and FDI investments will become all the more important. While the number of FDI proposals may be fewer pursuant to the liberalization of the FDI regime, the FDI proposals that are filed tend to relate to key sectors and involve substantial investments. The processing time of FDI proposals, and the availability of guidance from past proposals, will be crucial factors for investors in making investment decisions.

While the Government is evidently moving in the right direction, immediate process related improvements are needed to further streamline the FDI approval process and make it more efficient, timely and transparent.

This insight has been authored by Rajat Sethi (Partner), Tanya Aggarwal (Partner) and Raya Hazarika (Associate). They can be reached on [email protected], [email protected] and [email protected] for any questions. This insight is intended only as a general discussion of issues and is not intended for any solicitation of work. It should not be regarded as legal advice and no legal or business decision should be based on its content