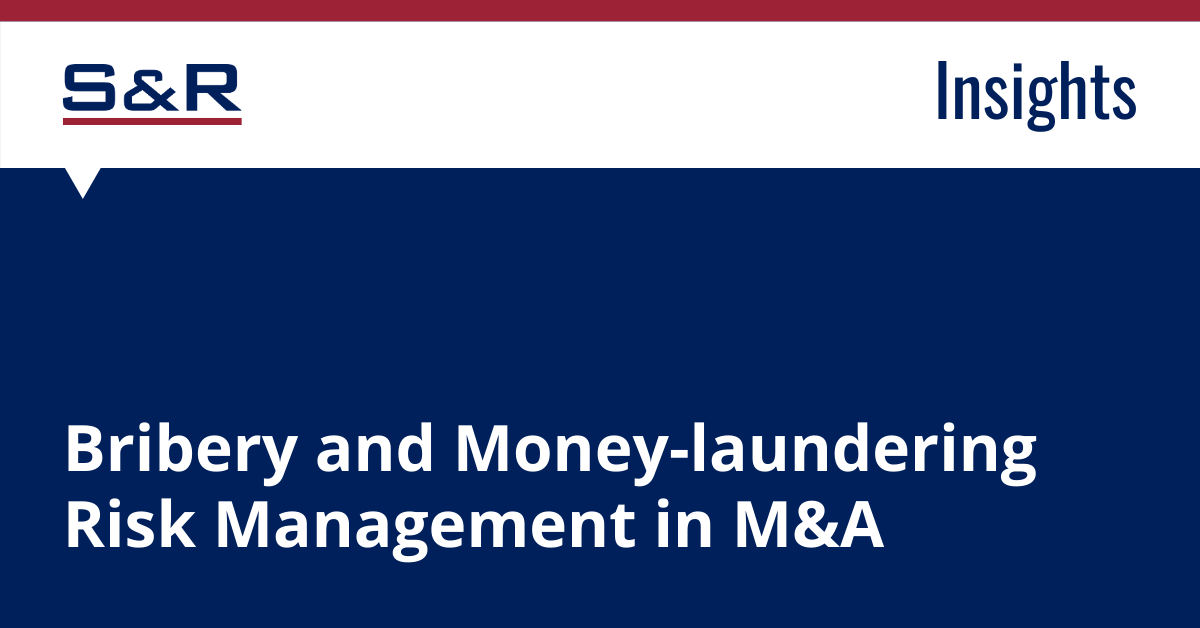 Perhaps there has never been a better time then the present to undertake cross-border M&A activities as the world is turning into a highly integrated global market. However, as government agencies and regulators around the world are strengthening their enforcement efforts (having unearthed major bribery, corruption and money laundering related lapses by various corporates in...

Perhaps there has never been a better time then the present to undertake cross-border M&A activities as the world is turning into a highly integrated global market. However, as government agencies and regulators around the world are strengthening their enforcement efforts (having unearthed major bribery, corruption and money laundering related lapses by various corporates in recent years), corporate activities have come under increased regulatory scrutiny. A target's historical and existing anti-money laundering (AML) or anti-bribery, anti-corruption (ABAC) violations and resultant liabilities typically become the acquirer's responsibility post-closing. This can have far-reaching legal, business and reputational consequences on the acquirer and in an extreme case, could result in an acquisition being a failure. As a result of this, acquirers have to be cognizant of not only any post-closing transgressions but also any pre-closing ones that they know, or ought to have known.

The (US) Foreign Corrupt Practices Act, 1977 (FCPA) makes it unlawful for certain classes of persons and entities (including any officer, director, employee, agent or stockholder acting on behalf of such entities) to, among other things, make payments to any foreign officials for the purposes of obtaining or retaining business or securing any improper advantage. Such payments through a third person are also prohibited. Similarly, the UK Bribery Act, 2010 (UKBA) prohibits bribery. However, it has a broader ambit than the FCPA as it covers commercial bribery as well. The defences available under these legislations are narrow in scope – the FCPA envisages certain affirmative defences including such payment being lawful under the written laws of the recipient's country and the UKBA recognizes a commercial organization's pre-existing adequate procedures for prevention of bribery being in place as a defence. Thus, parent organizations in the US and the UK could be held liable for illicit payments made by or on behalf of their businesses located abroad.

As evidenced by recent trends, investors including bulge-bracket private equity funds and multinational corporations are leveraging their experience and strengths and making investments of varying sizes across different sectors in emerging markets in addition to developed economies. Developed countries by and large have a more regulated environment with legislations and systems in place to better monitor compliance and financial activities of their nationals and corporates organized in, or carrying out business, in such countries. In comparison, developing or under developed countries are more likely to be cash-driven and susceptible to corruption, red-tape and bureaucracy related issues, which sometimes result in their corporates adopting a relatively lackadaisical approach towards their internal and financial controls and practices.

In addition, cultural differences and the psychological framework of the business community in the target's jurisdiction also need to be taken into account. For example, a monetary gift/reward made to a person/government official which constitutes an illicit activity or bribe in certain geographies may well be a cultural expectation in certain other geographies.

Geographical and development issues notwithstanding, certain sectors (on account of their inherent characteristics and peculiarities) are more prone to such issues as compared to other sectors. As an illustration, in India, defence, media, railways, telecom, and other sectors that are heavily reliant on government permits/approvals and have greater government interface are more susceptible to bribery, corruption and money-laundering related issues. In comparison, information technology company with a very limited government interface may fare better in this regard.

While this may not necessarily be true in case of control deals by strategic investors, as a practical matter, protracted commercial assessment of a target by private equity funds or financial investors sometimes leave less scope and time for meaningful legal and financial due diligence. This also becomes a relevant issue in case of bid/auction situations with aggressive timelines.

As a corollary to the above, acquirers often rely on contractual protection such as representations and warranties with corresponding indemnities to safeguard themselves against any pre-existing AML or ABAC related violations by the target. While this may seem obvious, it is worth emphasizing that such warranties may offer inadequate protection since they are usually limited in time and scope i.e., provided only in the context of the applicable laws existing in the target's jurisdiction and only for a limited look-back period with a claim-period limitation. In addition, indemnity pay-outs are heavily contingent on the indemnity provider's ability to pay, and in any case, are unlikely to solve for the reputational harm, criminal and other sanctions that could potentially be imposed on the acquirer/target post acquisition.

The approach of a hurriedly-conducted limited due diligence with heavy reliance on warranties alone is therefore a risky one. While due diligence may not be conclusive, it is a crucial exercise for assessment of risks, sensible risk allocation and gaining insight into latent AML or ABAC issues which the acquirer could be held responsible for in the future.

Depending on the type of deal (control v. minority stake deal), investment size and horizon, sector, geography, the business model of the target, levels of government interface and known/disclosed violations of the target, as a first step, when an acquirer instructs local lawyers, accountants and other financial advisors/consultants to conduct due diligence on the target and its key managerial personnel, diligence process should focus on the target's financial policies and procedures, code of conduct, gifting policy, employee training materials and material contracts with third-party vendors and key clients, and include Q&A sessions with the management and key employees to pressure-test their internal controls, policies and practices.

If the geography and sector are prima facie less susceptible to AML or ABAC issues and the preliminary findings do not throw up any alarming concerns, an acquirer may consider acquiring contractual protection in the form of: (i) broad representations (encompassing applicable laws of the jurisdictions in which the company operates) with appropriate survival periods and indemnity protections, (ii) specific indemnities for any identified violations, (iii) appropriate interim-period covenants, (iv) a redressal mechanism including a potential termination right in case of discovery of any material AML and ABAC violations during such period, (v) a comprehensive disclosure letter for all compliance related matters and (vi) specific pre-closing conditions to rectify any known or suspected non-compliances or violations or report them to the relevant authorities. The acquirer could also consider conducting a post-acquisition audit or forensic diligence when all confidential information, materials and controls pertaining to the target are available to the acquirer.

However, if the preliminary AML/ABAC findings are of concern or the sector/industry is prone to such issues, then an acquirer should consider having a forensic diligence/audit conducted prior to execution of the definitive documents. In addition to the contractual protections identified above, an acquirer could consider other means of risk allocation including a re-structuring if the problematic unit/division is capable of being separated from the assets/business being acquired or re-negotiating the valuation of the target or having an escrow or price holdback mechanism in place.

Following the acquisition, the acquirer should consider the following: (a) improving internal controls and adopting more efficient accounting and maintenance systems to prevent any illicit payments by the target, (b) conducting training sessions for employees across all levels, (c) adapting, amending or updating, as required, the code of conduct and the AML and ABAC policies of the target to bring them in line with the requirements under applicable laws and industry standards, (d) to the extend necessary, re-executing material contracts of the target to incorporate relevant AML and ABAC related covenants, (e) conducting periodic audits in case of sensitive sector/industry and (f) appointing a compliance officer to monitor and ensure compliance with all of the above.

Finally, in the event any violation is discovered post-closing, then a prudent approach would be to take appropriate mitigating steps, including notifying the relevant authorities and co-operating with them in any investigation.

The implications of AML and ABAC related violations are difficult to ascertain and quantify given the irreparable reputational harm they can sometimes cause to the acquirer, its business and management, in addition to the disruption caused on account of being dragged into litigation or proceedings with enforcement agencies. While it may not be practical to terminate or abort a potential deal in all instances of potential or known AML/ABAC violations, an acquirer will certainly benefit from a better understanding of any such issues that ail the target, which will enable it to take an informed decision in respect of such an investment with appropriate mitigation measures. In the words of Benjamin Franklin: an ounce of prevention is worth a pound of cure.