COVID 19: Revised Default Trigger Under The Insolvency And Bankruptcy Code 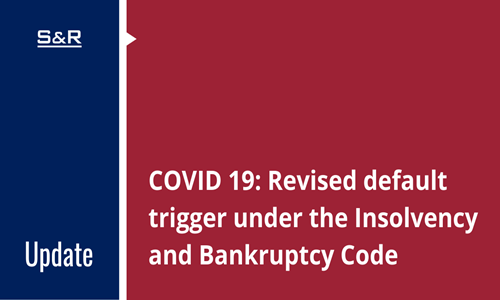 Pursuant to a notification dated March 24, 2020 (the "Notification")[1], the Ministry of Corporate Affairs, the Government of India has increased the threshold for default by corporate debtors under Section 4 of the Insolvency & Bankruptcy Code, 2016, as amended (the "Code") from INR 100,000 to INR 10,000,000. In terms of the Notification, potential financial and operational...

Pursuant to a notification dated March 24, 2020 (the "Notification")[1], the Ministry of Corporate Affairs, the Government of India has increased the threshold for default by corporate debtors under Section 4 of the Insolvency & Bankruptcy Code, 2016, as amended (the "Code") from INR 100,000 to INR 10,000,000. In terms of the Notification, potential financial and operational creditors will not be able to initiate the corporate insolvency process under the Code on and after March 24, 2020 in cases where defaults are less than INR 10 million.

As indicated by prior announcements[2] by Government of India, the notification has been issued in an effort to safeguard Micro, Small-scale and Medium Enterprises ("MSMEs") in India from insolvency proceedings in the wake of the country-wide shutdown to combat spread the COVID-19 virus.

Given that the suspension of business activities may trigger debt defaults owing to circumstances not within anyone's control, the Notification will provide welcome relief to MSMEs. The Notification will also ease the burden on the various benches of the National Company Law Tribunal ("NCLT"), which will be under substantial pressure to hear and dispose of several thousand pending matters under the Code that have been adjourned during the national lock-down.

The increase in the trigger threshold may, however, lead to certain unintended consequences. For example, the Notification is silent on the status of operational creditors who have served default notices under Section 8 of the Code prior to the Notification, but who have been unable to file applications under Section 9 due to closure of NCLT benches. Similarly, the Notification potentially restricts financial creditors from initiating proceedings under Section 7 of the Code where the relevant debt defaults of less that INR 10 million had taken place much prior to the outbreak of COVID-19. Finally, while the Notification has been issued predominantly to safeguard MSMEs, it does not restrict the increase in the default trigger amount to only cases involving MSMEs and, accordingly, all classes of corporate debtors appear to be covered by it. The Government should consider clarifying that the increase in the default trigger amount will apply (i) for a fixed period, as has been done in other jurisdictions such as Australia, and (ii) to defaults occurring after a specific cut-off date.

What is of greater concern is the Government's announcement that after April 30, 2020 it may consider suspending Section 7, 9 and 10 of the Code for a period of six months "to stop companies at large from being forced into insolvency proceedings in such force majeure causes of default"[3]. If the Government does indeed suspend these provisions of the Code, it should specify that such suspension should not impact existing proceedings or proceedings where the underlying defaults had no nexus with the spread of COVID-19. Additionally, if Section 10 is to be suspended, defaulting corporate debtors under financial stress will not be able to voluntarily opt for insolvency thereby increasing their exposure to debt they may not be able to service.