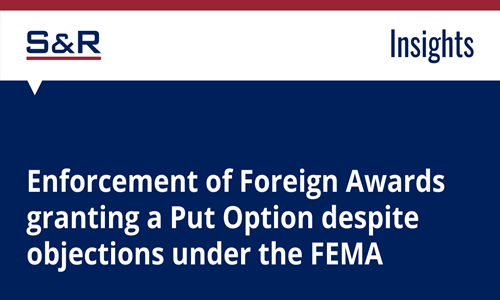 A 'put option' is a clause agreed in a contract whereby one party has the right (not an obligation) to sell its shares in a company to another person at an agreed price. Such price need not be an absolute number recorded in the contract and could be in the form of an agreed formula or may be left to determination by an expert (pre-agreed or subject to future agreement) using financial...

A 'put option' is a clause agreed in a contract whereby one party has the right (not an obligation) to sell its shares in a company to another person at an agreed price. Such price need not be an absolute number recorded in the contract and could be in the form of an agreed formula or may be left to determination by an expert (pre-agreed or subject to future agreement) using financial data as of an agreed date. A put option works as a means of exit for investor shareholders. Subject to a valid exercise of the put option and correctness of the valuation, once a put option is exercised, it entails a contractual obligation on the party upon which such option is exercised to purchase the shares at such price and acquire the shares.

In India, foreign investors rely on put options to exit the investee company while protecting the value of their investment, given that an initial public offering is not always feasible, liquidation or voluntary winding-up proceedings may be too time-consuming and an obligation on the investee company to buy-back their shares may be met with strict and cumbersome regulatory procedures. This article seeks to briefly discuss the treatment of objections to enforcement of foreign awards on grounds that the put option clause granted through the foreign award violates the foreign exchange laws of India.

FEMA-20 made no mention of the permissibility of put option clauses, which are in the nature of an optionality clause, in investment agreements for investments made by a person resident outside India. The RBI by way of a notification dated November 12, 2013 provided that "shares or convertible debentures containing an optionality clause but without any option/right to exit at an assured price shall be reckoned as eligible instruments to be issued to a person resident outside India by an Indian company subject to the terms and conditions as specified in Schedule I.". This was followed by a RBI circular dated January 9, 2014 which, in dealing with optionality clauses (either a put option or a call option) expressly stated that "optionality clauses may henceforth be allowed in equity shares and compulsorily and mandatorily convertible preference shares/debentures to be issued to a person resident outside India under the Foreign Direct Investment (FDI) Scheme. The optionality clause will oblige the buy-back of securities from the investor at the price prevailing/value determined at the time of exercise of the optionality so as to enable the investor to exit without any assured return." An optionality clause, including a put option clause would also be subject to other conditions laid out in such circular. Subsequently, by way of a circular dated July 15, 2014, the RBI revised the pricing guidelines applicable to issue and transfer of shares having optionality clauses. The exercise of a put option would therefore be subject to these revised pricing guidelines.

Further to the aforesaid notification and circulars, Regulation 10(7) of the FEMA-20R recognized the permissibility of put option clauses subject to (i) exercise of such option not resulting in any assured return; (ii) pricing guidelines provided in the regulations; and (iii) lock-in requirements prescribed by the regulations. This provision has also been incorporated in the Non-debt Rules. The pricing guidelines state that the transfer of shares of an unlisted company from a person resident outside India to a person resident in India shall be at a value not exceeding the valuation of the capital instrument in accordance with any internationally accepted pricing methodology for valuation on an arm's length basis duly certified by a chartered accountant or a Securities and Exchange Board of India registered Merchant Banker or a practicing cost accountant.

In view of the above, foreign investors are often faced with the argument that the exercise of their put option constitutes an assured exit and if the transfer is to be made at a price above the fair market value of such shares, then, that such transfer would be in violation of the statutory pricing guidelines.

At first, it is essential to note that a foreign arbitration award may not be enforced under Section 48 of the Arbitration Act on the ground, inter-alia, that such foreign award is contrary to the public policy of India. While courts were earlier inclined to consider the ground of 'patent illegality' as falling within the scope of 'public policy', after the amendment to the Arbitration Act in 2015, the scope of enquiry in relation to public policy has been limited to: (i) fraud or corruption or violation of sections 75 or 81 of the Arbitration Act; (ii) conflict with the most basic notions of morality or justice; and (iii) contravention of the fundamental policy of Indian law which does not result in review of the dispute on merits. In the year before the aforesaid amendment, the Supreme Court had in Shree Lal Mahal Ltd. v. Progetto Grano SPA ((2014) 2 SCC 433) clarified that a mere contravention of law would not attract the bar of public policy.

Given below is a brief of the circumstances and reasons for which awards granted in favor of foreign investors granting put option clauses have been upheld:

Further, the Delhi High Court held that it would not be open to the respondent to raise a plea that the investment by the petitioner was in violation of the FEMA or that performance of its contractual obligations was impermissible under the FEMA, given that the respondents had provided extensive representations and warranties that its obligations under the transaction documents were legally valid and binding[1]. Lastly, the court refused to accept that the put option clause amounted to an assured return as it was not an open ended exit option. The put option was exercisable within a specified time and was contingent on construction of the real estate project not commencing within the agreed timelines. The Delhi High Court also observed that the above referenced RBI circulars proscribe assured return on investments in India under the guise of equity, but would not apply to cases where the foreign investor exercises a put option as a remedy pursuant to a breach of contract. A special leave petition filed before the Supreme Court against this decision of the Delhi High Court was dismissed.[2]

Courts in India have favored enforcement of arbitral awards honoring put option clauses, notwithstanding a possible violation of the pricing guidelines under the FEMA, provided that the put option is triggered by a contractual default. Such exercise of a put option at a fixed price is not seen as an assured exit by the courts. It is also refreshing to note that Indian courts have given importance to the representations and warranties made by the parties while entering into a commercial transaction and they are not inclined to simply enforce the provisions of foreign exchange laws in India without giving due regard to the intention of parties providing such representations and warranties.

This insight has been authored by Shahezad Kazi (Counsel) and Aditi Agarwal (Associate). They can be reached on [email protected] and [email protected] for any questions. This insight is intended only as a general discussion of issues and is not intended for any solicitation of work. It should not be regarded as legal advice and no legal or business decision should be based on its content.

[1] Interestingly the Delhi High Court also relied upon the notes to the financial statements forming part of the annual returns filed by Unitech to determine if the arguments advanced by Unitech were an afterthought and malafide in nature.