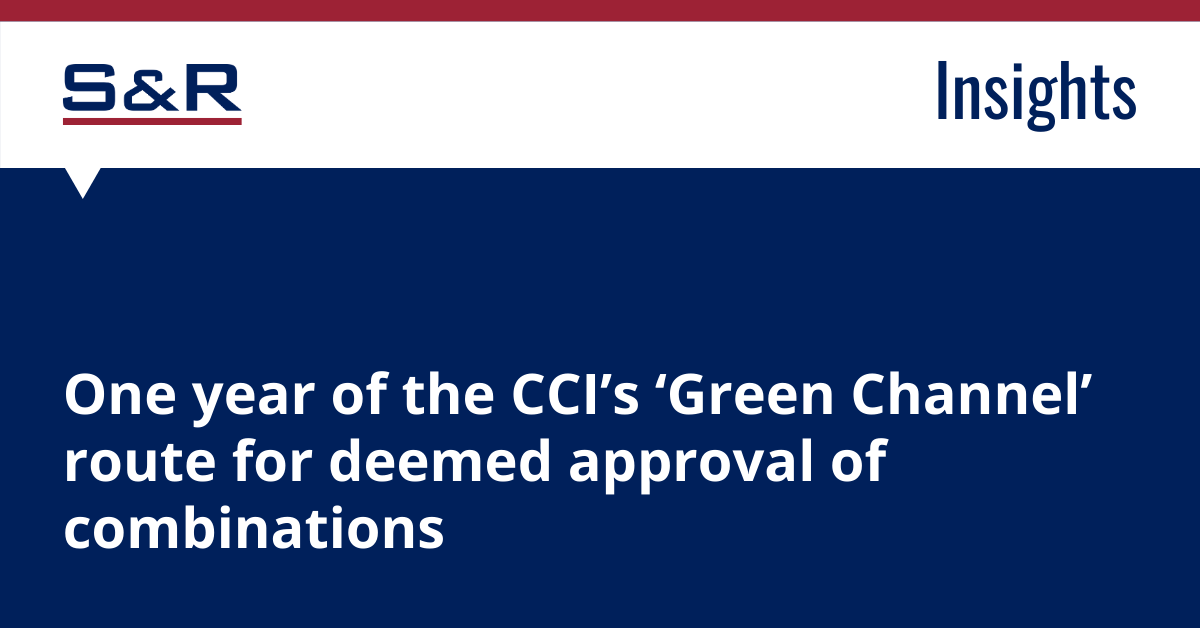 The Competition Commission of India (the "CCI") recently commemorated the completion of the first year of the 'Green Channel' approval route for combination filings in India,[1] by way of which, combinations which meet certain criteria are deemed to be approved upon filing a valid short form notification (Form-I) with the CCI, i.e., such transactions are deemed to be approved without the need to wait for a formal approval notification from the CCI.

Transactions which may avail of this 'Green Channel' route are those where, considering all plausible alternate market definitions, the parties to the combination (including their respective group entities and/or any entity in which they, directly or indirectly, hold shares and/or control), do not have any horizontal, vertical or complementary overlaps in their activities (the "Green Channel Criteria").[2]

A. Procedure for 'Green Channel' filings

In order to make a filing under the 'Green Channel' route, the notifying parties are required to self-assess that the Green Channel Criteria has been met. If such criteria are met, the notifying parties are required to file a valid and complete Form-I, along with a declaration confirming that the proposed combination satisfies the Green Channel Criteria and "is not likely to cause any adverse effect on competition".

Upon receipt of such filing, the CCI will issue an 'acknowledgment' (usually on the same day) which serves as the 'deemed approval' of the CCI.

The parties to the combination may proceed to complete their transaction on the basis of such acknowledgement of filing (i.e., the deemed approval). It is pertinent to note that 'Green-Channel' filings entail fewer disclosure requirements, and more particularly, market size, share or competitor information is not required to be provided to the CCI.

In the event the CCI subsequently finds that the transaction does not qualify for the 'Green Channel' route (including in the event of any incorrectness or incompleteness in the information furnished in the notice filed), it may declare such deemed approval to be void ab initio, and examine the filing in accordance with the provisions of the Competition Act, 2002 (the "Competition Act"). However, the CCI will provide the parties with an opportunity to be heard before passing any such order cancelling the deemed approval.

B. Combinations approved under 'Green Channel'

Initially, concerns were expressed on whether a meaningful volume of combinations will qualify for the 'Green Channel' at all, given certain ambiguities on the Green Channel Criteria and uncertainty on procedures. However, some of these reservations were addressed by the updated 'Notes to Form-I' issued by the CCI on 27 March 2020[3], which provided clarity on, inter alia, the entities to be considered as 'group companies' and the assessment of complementary overlaps.

Additionally, the CCI encourages the notifying parties to avail of a pre-filing consultation ("PFC") and obtain a non-binding view from the CCI case officers on the availability of the 'Green Channel' route in respect of any transaction prior to making such a filing,[4] where they provide guidance and inputs for making a complete and valid filing.

However, it should be noted that the advice provided at such PFCs is strictly recommendatory and non-binding, and the onus for self-assessment of the satisfaction of the Green Channel Criteria lies solely on the parties to the combination.

The following points should be specifically considered when conducting a self-assessment for the availability of the 'Green Channel' route:

1. 'Complementary' overlaps in addition to vertical and horizontal overlaps

The updated 'Notes to Form-I' clarify that complementary products/services are those which are combined and used together (for example, printers and ink cartridges), and that the competition assessment for such products would be undertaken in a manner similar to vertically related products.

As stated above, the Green Channel Criteria requires that in order to be eligible for the 'Green Channel', the parties to the combination, or their respective group entities, or entities in which they hold shares or control, should not have any horizontal, vertical or complementary overlaps in their activities.

However, based on CCI's decisional practice, where the parties to the combination (or their respective group companies) are engaged in similar or related businesses, but do not have any overlaps in India, availability of the 'Green Channel' route could be considered after consultation with the CCI.

3. Group and affiliate companies of the parties to the combination

Further, the updated 'Notes to Form–I' also clarify that only the following entities would be considered for "the purpose of phrase "any entity in which they, directly or indirectly, hold shares and/or control" as appearing in Schedule III of the Combination Regulations":

Accordingly, it is possible that overlaps to the extent referred to above may be considered not to impact availability of the 'Green Channel' route.

In the event the CCI holds the 'deemed approval' to be void ab initio, it could impose penalties under Sections 44 and 45 of the Competition Act for making a 'false' declaration, which penalty may extend to rupees one crore.

However, consequences for a transaction which has been consummated on the basis of a 'deemed approval', and subsequently such approval has been declared as void ab initio, remain unclear, including whether the parties to the combination could be required to 'unscramble' the combination, or undertake to 'hold-separate' the combined businesses, or to file a fresh notification under the Competition Act along with payment of gun-jumping penalties.

The 'Green Channel' route is a welcome addition to the Indian merger control framework since it aims to facilitate speedy clearance of patently non-problematic transactions with minimal transaction costs, without precluding regulatory oversight. However, as discussed above, certain aspects of such filings remain uncertain, and it will be instructive to observe how these issues are addressed by the CCI, in order to facilitate a wider and more certain use of the deemed approval route.

[2] See, Schedule III of the Competition Commission of India (Procedure in Regard to the Transaction of Business Relating to Combinations) Regulations, 2011

[9] This is particularly so in cases where the customer uses such products simultaneously (and individual use may not be practical), and combinations involving such products may lead to 'portfolio effects', where parties enjoy significant market power in respect of one product and could exclude competitors from the market for the complementary product based on compatibility or inter-operability with the primary product (see, for example, CCI's order in Bayer/Monsanto, dated 14 June 2018, https://www.cci.gov.in/sites/default/files/Notice_order_document/Order_14.06.2018.pdf, and CCI's order in Schneider/L&T, dated 18 April 2019, https://www.cci.gov.in/sites/default/files/Notice_order_document/Public1.pdf)