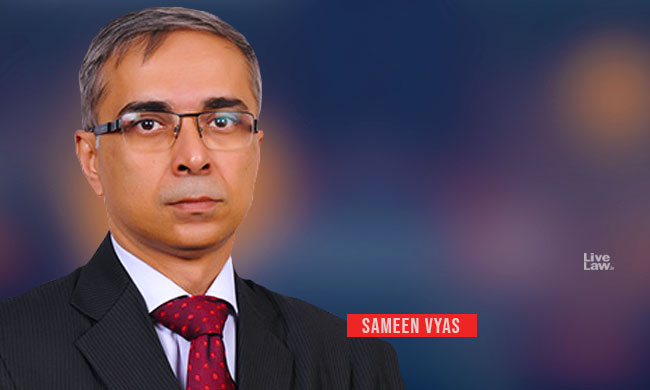 Sudden demise of Mr. Sameen Vyas has sent ripples across law firm circles. He suffered cardiac arrest during his sleep and departed unannounced at a young age of barely 52. SV, as he was fondly referred to, was a doyen of the projects practice in the country and backbone of L&L Partners, it being his first and last workplace.

Corporate lawyers are seldom eulogized. Unlike their litigating counterparts who enjoy a definite public life through celebrated judgments, courtroom interactions, wisecracks with the judges and folklores spreading wide and far across the bar, the ranks of corporate soldiers march on in the private sphere, their work by nature being frequently confidential. SV, a reticent and extraordinarily humble man, makes it even more difficult.

SV commanded an unparalleled respect in the office. He usually showed up post noon and his arrival was ushered by a sprinting Ghosh Dada (security guard) across the hall to open the door to his plush corner office. SV pranced silently through the corridor galvanizing everyone to immediately drop their chit-chat sessions and duck under the cubicles. This was a regular sighting each time that he took a smoke break. A remembrance for SV is inaccurate without sketching his romance with the cigarettes, and boy, he enamored his smokes. His acknowledgment of respect for him in the firm was evident from his gesture of ceding the usual (non)smoking zone for a more secluded and peaceful corner where most others dare not step in unless in search for uncomfortable encounters with SV.

I was part of SV's team for a short term as against those who were fortunate to have spent decades as his colleagues and team members. However, I would find wide support when I say that SV was a very difficult boss. A workaholic, hard task master with exceptional legal mind and an impeccable standard for any deliverable, SV had an eye for detail and he wouldn't miss a thing. He would undergo many rounds of review and would not send a single document out without his cent percent self satisfaction. However, most of them would also tell you that none of these were the reasons why he was a difficult boss. SV was a man of few words. He relied extensively on non-verbal communication to express his exasperation and disappointment when work isn't up to the mark. Even appreciation of your work would be subtle, never in more than a word or a few quick nods. It takes a short while to learn to speak 'Sameen' but you get the hang of it oddly quick. He would also have his sudden outburst of anger to convey his displeasure sparing no one. Last year, L&L started therapy dog days to tackle stress at work. Owing to my luck, I was caught right at the particular moment when I walking the dog. Although SV didn't say a word then (I am certain I sensed an eye roll), a couple of days later in a figurative rap on the knuckle during a team meeting, he harshly asked me to concentrate more on the work rather than chasing dogs in the corridor.

SV wasn't your usual 21st century suave corporate shark in a suit; rather he was an old school gentleman with a rustic charm. He would carry his entire day's food from home and would utilize long and frequent team meetings to quietly gobble it during discussions. He would also offer it to you and would insist that you take it. He was ever ready with quirky and playful retorts. A few weeks after the dog episode, one would assume SV has forgotten about it. However, it so happened that SV, another partner, the dog and me were in close proximity. The dog came running up to me yet I stood resolute and didn't pet. The other partner asked me why wouldn't I. I thought now is the time to pull one up and said I have been forbidden by SV. The other partner turned to SV and enquired why as it is supposed to be a great stress buster. Before I could pat myself on the back, SV retorted "abhi koi stress hai nahi to ye haal hai iska to jab sahi me stress aayega tab kya karega ye?" It was another home run by him.

Above all, SV was a really good man. Beneath the tough act, lied a soft core with molten caramel, I presume. There was a transaction the team was doing in tandem with the other firm. He would always look out for us like a mentor who admonishes in private for you to learn yet stands by you before others. In projects practice, work hours can be steep. Every night around nine he would walk out from his cabin to ask what exactly are you up to and would send you home if it's something that is non urgent and possible to be done the next day. It's in stark contrast with most teams and juniors who hang around because the boss hasn't left the office.

It was SV's birthday on September 6th in 2018. As per tradition, the team organized a celebration in the canteen. It was the day Supreme Court judgment striking down Sec. 377 had also come out. There was a sense of excitement on the entire floor as it was SV's birthday and it saw maximum participation across the firm, so much so that people had to even stand outside the canteen. Right after the celebration, SV came back straight to his office and within a few minutes turned his lights out and left early for home, the reticent incarnate that he was. A few minutes later, he shyly returned to our cubicles, thanked us for organizing the birthday, said goodbye and then left. I wish he would return just to give us the opportunity this time around to thank him for all the lessons, for his humanity and to bid him a heartfelt farewell.

He untimely passed away without a notice. The loss to his firm, colleagues, mentees and friends is immensely unbearable but heart goes out to his wife and two young daughters with who all of us stand firmly in this time of grief and pray that may God give them strength to tide through this tough time.

Aman Saxena, is a 2018 graduate of NLSIU and former member of the team of Mr. Vyas.