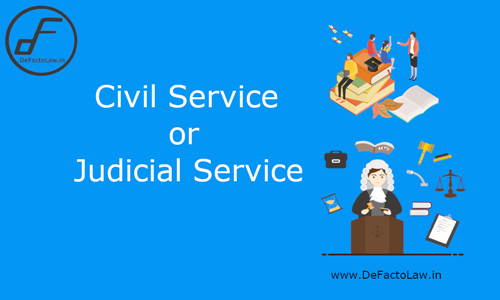 A government job is certainly the most sought after option due to the stature and prestige involved in it. It is often regarded as a dream job of many graduates, specifically when it comes to law graduates. Yet they are continually struggling to choose between two choices, that is, the training of the Union Public Service Commission (UPSC) or the Judicial Services Exam.

Which one is better, careerwise? Which one has a greater chance of success? Which one has the highest work satisfaction, etc.? As an optional law instructor at UPSC, I have often dealt with these questions of law students.

This article aims to help explain the doubts and encourage you to decide for yourself, whether to study for Civil Service or Judicial Service, by analyzing the complexities of each test.

In the last five years, many law graduates have cleared UPSC with flying colors and often in top ranks. It's become a common career choice for law graduates. And rightly so, a law graduate in UPSC has some benefit compared to other subject graduates.

This has always questions from the legal side of the topics present in the syllabus in almost all UPSC's compulsory articles, which is comparatively easier to understand for a law graduate.

I've written a lot about similar issues on different social media platforms like twitter, quora or telegram. Here I am going to compile some sort of summaries of all those answers.

Now coming to evaluating these exams, Both of these exams are different and they do vary a lot, in terms of 1. Structure, 2. Effort Required, 3. TIme of preparation, 4. Career progression and 5. Chance of success. Let's discuss them individually in detail -

UPSC Exam - This exam is very simple in terms of pattern, it has a fixed syllabus and doesn't change much throughout the year, the last major change introduced was in 2013. UPSC mains consists, after prelims, of 5 mandatory papers (4 GS papers and 1 essay paper), and one optional subject with two papers (in which law graduates can easily opt for law).

The syllabus of General Studies papers nearly overlaps with the optional syllabus of law by 40 per cent. The syllabus of optional subject of Law has no procedural laws (CrPC, Proof, and CPC), so it becomes easy for law graduates to clear the Civil Services Exam.

Judicial Services Exam - This exam varies from state to state, in terms of the number of papers, syllabus and marking scheme involved and it might continue to be so until a uniform All India Judicial Service Exam in India becomes a fact. Perhaps over the next two to three years that will also be introduced in the country.

Invariably, State Judicial Exams have a language barrier as it is mandatory to include one subject of vernacular language test. And if the person does not belong to a Hindi background, it becomes quite a task to pass the Judicial Services Exams, specifically of northern states. The same goes for students from northern states going for the exam of judicial services in southern states.

Generally speaking, UPSC takes a little more effort than judicial services. A candidate needs a more intelligent brain for the former whereas the latter one requires more memorizing skills. And hence it is comparatively easy for law students to understand a question and frame their thoughts in writing, rather than memorizing it.

In my experience, law students are more eloquent in selecting terms and creating a dialogue over a topic than other candidates preparing for UPSC exams.

UPSC Exam - The effort is more coordinated in UPSC due to the generic nature of its syllabus. It requires an ingenious and sapient brain and does not require much of cramming skills. For example, the question from The Information Technology Act, in optional law subject, would be an interpretation based rather than being a provision based.

Judicial Service Exam - It also requires a comprehensive effort but in a different way. It requires efforts for comprehending the syllabus, as when one prepares for judiciary he/she generally goes for two-three States Judicial Exam in one go (why to limit yourself, right !).

Each syllabus of the State Judicial Service has at least three-four different local acts, often in large portions too. It takes a great deal of time to learn exactly what to study. Question papers from the previous year represent a major relief in deciding that.

Time required for preparation actually depends on how much the candidate has studied in law school, it is true in case of both the examinations.

UPSC Exam - Ideally it takes 1 year but even if an applicant is called for an interview, he / she must study before the final results are out because there is almost a five-month difference between the mains exam and the final outcome.

If the applicant is well-read and has been involved in current affairs during college days or has engaged in debate competitions, well, he/she is in a great advantage in reducing the time frame for the production of ideas and therefore reducing the overall preparation time needed. So it would be a much better choice to keep one and a half years aside.

Judicial Service Exam - It requires a full devotion of two years, if not preparing from college days. The reason I say so is three fold.

Firstly, extra local state laws that are not part of the syllabus in law schools must be learned, unless you are from and appearing for the judicial service of the same state from state law colleges. As in Delhi Judicial Service, four additional acts that are not to be found in UP or MP Judicial Services need to be researched.

Secondly, the bare act requires too much mugging, because the preliminary examination usually asks the parts and even the date on which it came into force. Delhi Judicial Service Examinations, however, have been strengthened by asking more concept-based questions than facts.

Thirdly, there is no predetermined date for vacancies and at times few states don't have vacancies notified for straight two years which adds to uncertainty in preparations.

For Civil Services Career, if the applicant is young (22yrs-28yrs) there is more or less a fixed career progression up to a certain stage. Post that, it depends upon the career performance or ACR, and at times, on political goodwill as well.

For a Judicial Services Career, the stature of a Judge at a High Court is very much achievable but for the Supreme Court is tough as the competition amongst various lawyers is fierce due to the collegium system.

The success rate depends upon multiple factors such as number of seats available each year (for determining competition), and material available for the preparation of examinations. Examination certainty, on-time result declaration, regular vacancy are few other factors as well.

UPSC Exam - Total seats range from 600-1000 per annum. The Indian Corporate Law Service is an important service included in All Indian Services. The career advancement in this service is ideal for law graduates, but every aspirant aspires to the right IAS?

Reason for the above statement is that the demand of both exams is different, so it would not be advisable to club the planning of two at all.

The type of questions posed, answer structure and depth of understanding needed to answer questions in both the examinations are completely different. I've had students who are already in the judiciary but for exactly the same reason they couldn't clear UPSC.

For Example, on a topic like ''Eminent Domain Doctrine''

Now analysing the above questions the candidate can clearly see while the first part of the question is the same the other part of these questions will be the key. UPSC requires candidates to write about the doctrine in legal, social and economic aspects, while Judicial examination would only concentrate on legal aspects.

Well, it is going to be an act of sheer dumbness if not choosing it. I'm sorry for the blunt word because, I mean, what would you do when you're ready to learn a whole new topic and drop a topic you've been studying for 5 or 3 years.

Otherwise, law is the only UPSC subject where the syllabus is approximately half of what a law student has learned in graduation (3 years or 5 years). No questions are asked regarding the procedural laws (CPC, CrPC or Evidence).

3. Is coaching required for law students?

To answer the above question, I will ask you to read the syllabus in more detail and access yourself before deciding on that.

Broadly speaking it depends on how much you have been able to retain in law courses. Going through the previous year papers might help a lot in this regard. It might provide you with an understanding of the level of effort and depth of understanding needed to write answers.

4. Can a candidate prepare while working?

Yes, he/she can. With the advent of online coaching and technological support in today's time, it is easier than ever was. I have more students in online class than in offline class. It gives comfort at home and saves travel time.

One can prepare while doing a job, but taking out enough time is the key point, considering the demanding nature of legal jobs. If the work is not so demanding then one can easily opt for online coaching/classes.

So what to choose and which one is a better option lies in the requirements of a candidate. I have explained and laid down all the necessary information and considerations one needs in order to decide over the ideal choice.

I've had students who are already in the judiciary and yet enrolled in my classes for UPSC for law training because of the respect and authority one commands in society or otherwise as an IAS officer from the very beginning of the career is enormous. It takes a lot of time to achieve that kind of stature in the judiciary.

The reverse has never happened, as far as my knowledge is concerned, an IAS officer and also a law graduate tries for Judicial service exams. It's rare to find a case like that. However, it does not imply that Judicial Service is any way lesser than a Civil Service. It's simply a matter of choice as to how one would like to serve the society at large.

Aditya Tiwari, He has been teaching UPSC aspirants in Delhi since 2013. He runs the website www.defactolaw.in , Which is dedicated to law optional students. He holds a bachelor Degree in Civil Engineering from Motilal Nehru National Institute of Technology (MNNIT), Allahabad and an LLB from Delhi University. Can be reached at [email protected]