Transformative Constitutionalism And The Sabarimala Judgment 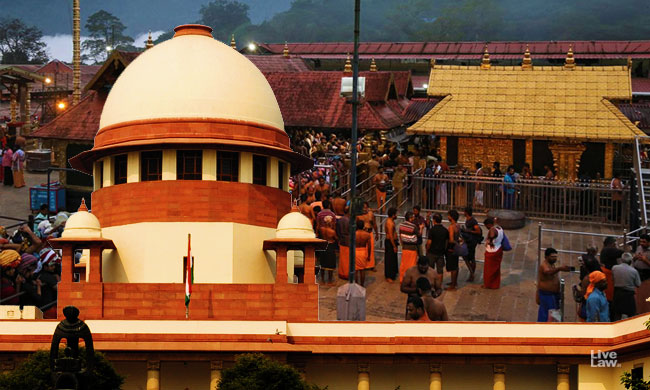 The Indian Constitution is a great social document, almost revolutionary in its aim of transforming a medieval, hierarchical society into a modern, egalitarian democracy and its provisions can be comprehended only by a spacious, social science approach, not by pedantic, traditional legalism.[1] The whole idea of having a Constitution is to guide the nation towards a resplendent...

The Indian Constitution is a great social document, almost revolutionary in its aim of transforming a medieval, hierarchical society into a modern, egalitarian democracy and its provisions can be comprehended only by a spacious, social science approach, not by pedantic, traditional legalism.
[1] The whole idea of having a Constitution is to guide the nation towards a resplendent future. Therefore, the purpose of having a Constitution is to transform the society for the better and this objective is the fundamental pillar of transformative constitutionalism.
The concept of transformative constitutionalism has at its kernel a pledge, promise and thirst to transform the Indian society so as to embrace therein, in letter and spirit, the ideals of justice, liberty, equality and fraternity as set out in the Preamble to our Constitution.
[3] The expression ‗transformative constitutionalism' can be best understood by embracing a pragmatic lens which will help in recognizing the realities of the current day.[4]
Thus, the concept of transformative constitutionalism, which is an actuality with regard to all Constitutions and particularly so with regard to the Indian Constitution, is, as a matter of fact, the ability of the Constitution to adapt and transform with the changing needs of the times.
[5]Klare defines transformative constitutionalism as "a long-term project of constitutional enactment, interpretation and enforcement committed to transforming a country's political and social institutions and power relationships in a democratic participatory, and egalitarian direction"
In post-independence India, many of the practices, rituals, taboos, and gender-based inequalities have been variously brought down by progressive social reform movements, legislative developments as well as through many bold and innovative judicial interventions.
[6]India has been witnessing one such phase of remarkable perplexity for gender sensitivity as well as quest for women's rights, equality and what has now come to be placed under the rubric of women's "bodily integrity" The Supreme Court (SC), and in many cases even some of the state high courts, have had the audacity to change the status quo; Their judicial hammerings have sought to lead the way for making decisive inroads for basic human rights of Indian women in a society essentially driven by patriarchy.[7] The practice of discrimination takes place, among others, under the garb of cultural norms, religious mores, and social constructs as well as even under legislations (as has been the case with the 1860 Indian Penal Code [IPC]), The Constitution and many of the statutes provide for equality of all individuals and grant them equal protection before the law.[8] Hence, the role of the courts, especially the higher judiciary, becomes imperative since they are the watchdog for enforcement of fundamental rights enshrined under the Constitution.[9]
Restricting women's entry to places of religious worship has become a highly contentious issue of late, Though such practices have been persisting for decades in India, movements across the country have recently espoused these concerns, leading to several petitions being filed in High Courts and in the Supreme Court.
[10] Demonstrating an encouraging trend, courts have emphatically upheld rights of women to equality and freedom of religion, thus striking down the restrictions imposed.[11]
Chandrachud J. sets up the issue in the introductory part of his judgment, where he observes that the Indian Constitution is transformative in two distinct ways: ​first​, in setting up the governing institutions of an independent republic, transitioning from colonial rule; but ​also​, "placing those who were denuded of their human rights before the advent of the Constitution – whether in the veneer of caste, patriarchy or otherwise -in control of their own destinies by the assurance of the equal protection of law".
[12]The reference to caste and patriarchy is important, because it acknowledges that discrimination is not limited to State action, or even to hostile ​individual ​action, but that it also flows from ​institutional design​: caste and patriarchy are neither "State" nor an agglomeration of individual acts where you can attribute discriminatory agency to identifiable individuals.

Popularly known as the Sabarimala Case, this came before the Supreme Court of India in the year 2006 by way of a Public Interest Litigation under Article 32 of The Constitution of India. The Association of Indian Young Lawyers, i.e. the petitioners prayed for the

The Supreme Court to solve this case framed various Issues which are: -

The court answered in affirmative stating that this practice encourages discrimination on the basis of sex and hinders the right to equality.

Article 25 essential religious practices only, Judicial pronouncements over the years have come to the conclusion that the test to determine whether a part or practice is essential to a religion is to find out whether the nature of the religion will be changed without that part or practice.
[14] The Court observed that By allowing women to enter into the Sabarimala temple for offering prayers, it cannot be imagined that the nature of Hindu religion would be fundamentally altered or changed in any manner. Secondly, alterable parts or practices cannot constitute the core of a religion and hence cannot be construed as essential.[15] There has to be unhindered continuity in a practice for it to attain the status of essential practice.[16] For this fact, it was observed that the Devaswom Board itself accepted before the High Court that previously the women of age group 10-50 years used to visit the temple to offer prayers which means there is no continuity of this practice to form an essential part of the religion. Therefore, this practice is neither an essential nor an integral part of the Hindu religion without which Hindu religion, of which the devotees of Lord Ayyappa are followers, will not survive.

The court while answering this issue observed that, In order to constitute a separate denomination, there must be something distinct from another. A religious denomination must necessarily be a new one and new methodology must be provided for a religion. There is no identified group called Ayyappans. Every Hindu devotee can go to the temple. It was also observed that there are other temples for Lord Ayyappa and there is no such prohibition. Mere observance of certain practices, even though from a long time, does not make it a distinct religion on that account. Therefore, there is no identified sect. Accordingly, it was held that Sabarimala temple is a public religious endowment and there are no exclusive identified followers of the cult.

Hindus which includes all genders which the sole condition that they are Hindus. Section 3

In ​Sabarimala​, Chandrachud J. attempts to demonstrate how, in fact, the proscription in question ​does ​restrict freedom and dignity, and therefore, should be judicially invalidated.
[17]He does so by telescoping outwards from the singular event itself (exclusion from worship in one temple), and showing how this single event of exclusion is ​nested in an entire social and institutional order that is characterised by hierarchy, subordination, and exclusion.[18]
Finally, ​The Supreme Court has ruled that women, of all age groups, can enter Sabarimala temple in Kerala, The apex court in a 4:1 majority said that the temple practice violates the rights of Hindu women and that banning entry of women to shrine is gender discrimination.
[19] A five-judge Constitution bench, headed by Chief Justice of India Dipak Misra, said that the provision in the Kerala Hindu Places of Public Worship (Authorisation of Entry) Rules, 1965, which authorised the restriction violated the right of Hindu women to practice religion.[20]
Rahul Ranjan is a B.A.LL.B first-year student from Lloyd Law College. Author's views are personal.

[10] Ruhi Bhasin, SABARIMALA AND WOMEN'S ENTRY: NEED FOR A BAN ON THE BAN