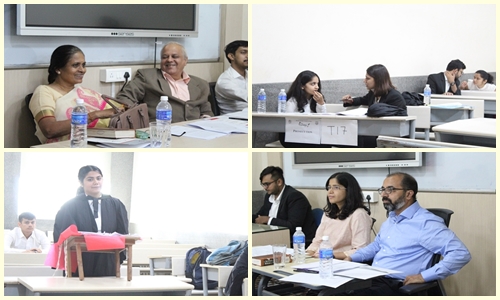 The 10th Edition of Nyayavalokan, the National Trial Advocacy Competition of SVKM's Pravin Gandhi College of Law is going on in full swing. Based on scores of the Preliminary Rounds of the competition which were held yesterday, the top 8 teams qualified for the Quarter Final Rounds. The draw of lots for the Quarter Final rounds took place yesterday; post the announcement of the results of the Preliminary Rounds.

Similar to the Preliminary Rounds, students of PGCL were carefully selected and prepped by the Organizing Committee to support the teams competing today, as witnesses. The witnesses were allotted to each team who were then given a chance to brief the witnesses and prepare them for the cross examination. The witness briefing session is considered to be one of the most crucial and important elements of a criminal trial as witness statements can change the entire course of a trial and can be a major turning point.

The Quarter Final Rounds were held in 4 courtrooms. Each courtroom had 2 qualifying teams, one as counsels for prosecution, and the other as counsels for defence, based on the draw of lots which took place yesterday. Each courtroom was headed by a bench of two judges. Eight judges were invited by the Organizing Committee to judge today's rounds, all of them experts in matters similar to the one in the moot proposition of competition.

All 8 teams put their best foot forward in today's rounds. Each participant, individually and as a unit with their teammates, used their understanding and knowledge of the facts of the case and the witness statements to the T. some of the teams took their opposition and the judges by surprise, by using out-of-box elements to make their contentions stronger. All the questions put forth by the judges during the course of the arguments, were answered effortlessly and satisfactorily by the participants. The competition is definitely neck to neck, with all 8 teams with their eyes on the prize.

Based on the scores awarded to each team member in the Quarter Final Rounds, the Top 4 teams with the maximum scores will qualify for the Semi Final Rounds which will be held tomorrow, followed by the Final Round of the 10th edition of Nyayavalokan.