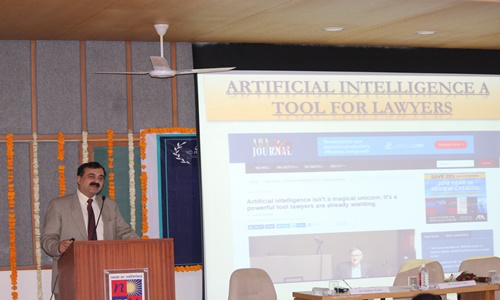 Thereafter, Dr. Satyam Priyadarshy, Tech Fellow and chief data scientist of Haliburton, USA, talked about the amount of data being used present day and the spread of fake news owing to high usage of data. He even spoke about the development of technology in future, such that there would be one day where humans would be able to put in a chip inside the hand itself and one would not have to use a specific device for it. He also spoke about automatic cars and first AI robot Sophie that even though she is a first artificial intelligence-operated machine yet she is not above the limits of a human because she is not self-learning like humans so there are limits imposed on the robot as well, if it was self-learning like a human then it would be limitless. Dr. Satyam also gave an example of artificial intelligence and machine learning robots in the Hindu mythology of 'Luv and Kush' that Kush was not actually the son of Ram and Sita but actually created by Valmiki as a machine.