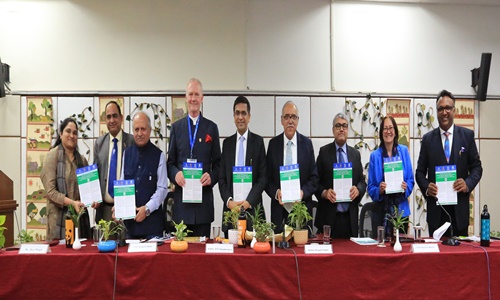 Jindal Global Law School (JGLS) of OP Jindal Global University (JGU), in association with WWF-India, has launched a Master's Programme in Environmental Law, Energy and Climate Change, a first of its kind to be taught in India.The two institutions have together launched a one-year LLM programme in a niche and futuristic area relating to environmental justice and climate change, which are...

Jindal Global Law School (JGLS) of OP Jindal Global University (JGU), in association with WWF-India, has launched a Master's Programme in Environmental Law, Energy and Climate Change, a first of its kind to be taught in India.

The two institutions have together launched a one-year LLM programme in a niche and futuristic area relating to environmental justice and climate change, which are critical to our existence on the planet. A memorandum of understanding (MoU) to this effect was signed between the two institutions in New Delhi on 27 March.

This course is open to law graduates who would like to develop specialist legal knowledge on national and global environmental issues. The law professionals working in the field of environment will also be benefitted by this programme.

Explaining the important role of lawmakers in protecting the environment and the significance of the course, Professor (Dr.) C Raj Kumar, founding Vice-Chancellor, JGU, said, "The theme of environmental law and climate change is probably the most important issue that universities and law schools should be concerned about. There is a sense of responsibility on the part of higher education institutions to be able to address issues that are going to have significant implications for the future. Environment is one such thing, but even more importantly, legal institutions and laws have a very significant role in speaking truth to power. Public policy and law have that goal and with that objective we are launching the Master of Laws programme in collaboration with WWF-India."

The objective of the programme is to study the relationship between environment and climate change as well as the role of law, judiciary, resolution mechanisms but the alternate energy solutions and how people are dealing with climate change, environmental laws and the implementation of available solutions.

Ms. Moulika Arabhi, Advisor, Centre for Environmental Law, WWF- India, said, "Law and policies of the country need to be stringent to combat climate change and its adverse effects. Economic development, decentralized Government mechanisms and judicial interventions need to go hand in hand to deal with climate change issues and adaptation to them. Environment law courses and conferences like this provide the necessary understanding."

Delivering the Green Law lecture on Environmental Justice and the Rule of Law: Role of the Judiciary and Judges, Dr. Justice DY Chandrachud termed climate change an existential threat and the most important issue facing humanity today. He elaborated on the various threats facing the environment like greenhouse gas emissions, and the marine debris floating in the Pacific Ocean and other oceans.

He also spoke of the threat posed by water scarcity in India as well as across the world and the extinction of various species due to global warming and the marked increase in natural disasters due to deforestation and climate change that has resulted in environmental refugees.

Looking inwards, Justice Chandrachud remarked: "As judges and lawyers, we need to be more environmentally sensitive and ensure that the printing of paper is only done whenever it is necessary. There should be a national level policy for handing and disposing off files and documents for cases that have been disposed of. There is a need for the National Green Tribunal to really fan out to different parts of the country and not expect citizens to come to large metropolitan cities in need of justice."

In his presidential address, Mr. Justice Deepak Gupta highlighted the need for equal access to environmental justice. He urged the civil society to be more aware and proactive in protecting the environment. "Court and judiciary can just pass orders. To reach the desired solution, administration and public will have to come forward and act as well. Otherwise, the country will keep moving from critical to extremely unhealthy environment leading to further damages and climatic changes. And for this one needs not only education, but sensitivity too," he said.