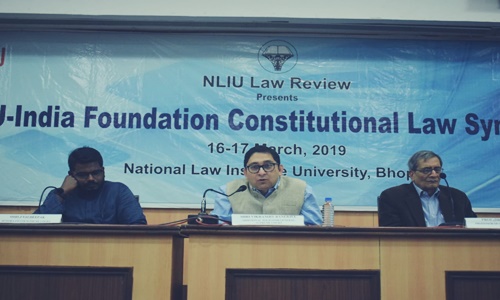 The NLIU-India Foundation Constitutional Law Symposium resumed on 17th March with the final paper presentation titled 'Sedition: The Victorian Era Tyrant', which examined the use of the sedition law to stifle criticism against the government and the branding of people as anti-national.The Symposium featured a special panel on 'The Aberrations in Principles of Separation of Power' chaired...

The NLIU-India Foundation Constitutional Law Symposium resumed on 17th March with the final paper presentation titled 'Sedition: The Victorian Era Tyrant', which examined the use of the sedition law to stifle criticism against the government and the branding of people as anti-national.

Justice Misra enunciated his views on the Indian constitution being a philosophy more than a document. He lamented the shift of society's focus from obligations to rights, while urging students to value morality over money. The speakers touched upon landmark judgments, historical events, and relevant doctrines of law while discussing the prevailing theme of separation of powers.

The Plenary Panel on 'Faith and Indian Constitution' began with an address by Vikramjit Banerjee (Additional Solictor General, Supreme Court), on the development of the relationship between law and faith. Law has always come from the people and always must be interpreted within people, thus making faith, society and law largely inseparable. This, unfortunately, has led to the State, through the judiciary, imposing upon Indian people its own definition of morality – an oppression in itself.

The second panelist, Prof. V. K. Dixit (Professor of Jurisprudence and Constitution, NLIU) staunchly supported the Sabarimala judgment, stating that women have been victimized by all religions for eons, dominated by the patriarchy, which was made more visible in the Triple Talaq and Sabrimala judgments where the Supreme Court was put on the defensive.

A spirited reply was given by Advocate J Sai Deepak who asserted that while equality is important, it commits an intellectual fraud by closing eyes on every distinction possible. Equality is a mandate that must be achieved in context. Unrestrained judicial activism ignores the nuances of beliefs of tantric temples, and leaps to ill-informed conclusions based on half-baked information. he urged people to read more extensively and wisely in order to form their own opinion, and not succumb to what is fed to them on prime time debates. In his interaction with the students, he stressed upon the need for India to evolve its own brand of feminism, not relying on the import of its western notion.

Ms. Anuradha Shankar brought out the relevancy of the issue by referring to the latest terrorist attack in New Zealand, which stretched freedom of speech to deranged limits. He killed innocents at a place of worship while streaming it live on Twitter, Facebook and Instagram and YouTube. This leads to a dystopian1984-like situation, but is not because of the presence of a draconian government. Prof. Alam offered his concluding remarks, illustrating the responsibility of the private actors in this scenario, who essentially decide what we read and access.