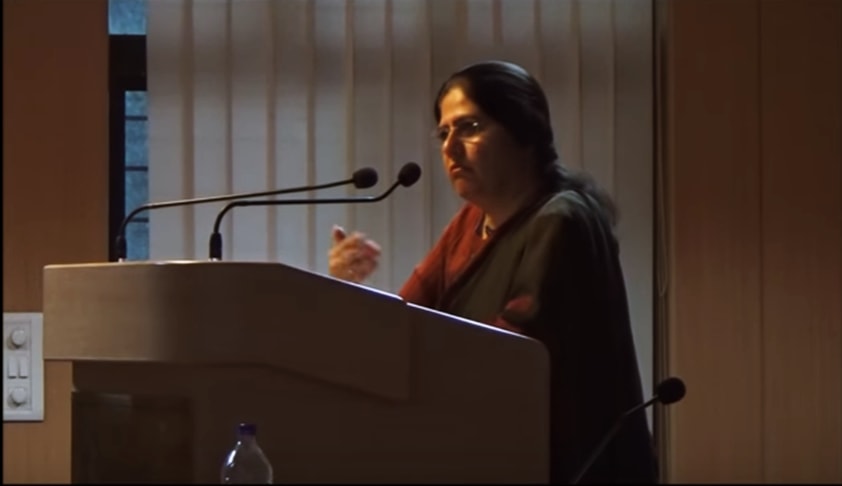 Ms. Vrinda Grover, leading Advocate at the Supreme Court and prominent Human Rights activist, discussed Legal immunities and the colonial continuities of such provisions in her guest talk at NALSAR University of Law, held On 7th October, 2017 as a part of the NALSAR Lecture Series on Constitutionalism.She began by underscoring the constant tussle in democracies: that between the sovereign...

Ms. Vrinda Grover, leading Advocate at the Supreme Court and prominent Human Rights activist, discussed Legal immunities and the colonial continuities of such provisions in her guest talk at NALSAR University of Law, held On 7th October, 2017 as a part of the NALSAR Lecture Series on Constitutionalism.

She began by underscoring the constant tussle in democracies: that between the sovereign right given to persons and citizens over their own bodies and concerns of ‘national security’. The former, according to her, has found grounding in the recent Privacy Judgment.

According to her, the way in which concerns of ‘national security’ have been formulated are demonstrative of a ‘colonial continuity’. Even the images of enforcement bodies- like the Police and security personnel- are similar to the images visible in the pre-independence era. Do the laws surrounding these personnel, like their image, also resonate with the colonial period? She answered this in the affirmative.

Ms. Grover centered her discussion around Section 197 of the Criminal Procedure Code and the AFSPA, which confer immunity on public servants when they act or purport to act in the furtherance of their official duties. The compatibility of these provisions with the notions of right to life and right to justice formed the core of the discussion.

She highlighted that to understand the colonial continuity of these immunities, the jurisprudence of  these immunities needs to be analyzed from the British Colonial to the democratic period. It then becomes critical to uncover the political impulses that led to the passage of these laws to understand their connotations in the present times. In pursuance of this objective, she surveyed a collection of provisions, enactments and judgments surrounding the security forces.

It was in the context of the independence struggle that sections akin to Section 197 were enacted (which is, in substance, the same as Section 271 of the Government of India Act, 1935) to protect police officials who were reinforcing and maintaining colonial rule over the Indian populace. A brief survey of jurisprudence, beginning from the Privy Council to the Federal Court and ending at the Supreme Court of India shows that the need for sanctions for prosecutions remains necessary in taking action against public servants, often directly diluting the right to life and justice.

Two strands, she continued, have evolved from this survey of jurisprudence which can be called the “corruption” and “right to life” strands. In the former, the Court has waived off the requirement for a sanction, while in the latter cases, these sanctions continue to be necessary. Sanctions have been the decisive factor even in cases before the Supreme Court, including cases of serious breaches of Fundamental rights or human rights violations.  This, she believes, needs to be reflected upon; has the loot of public funds become a greater crime than compromising the right to life of individuals? What is the value the Court and the State places on an individual’s life?

Section 197 was challenged in 1956 before the Supreme Court in the case of M. Dubey v. State of Bihar, and was held to be constitutionally sound by the Court.  The SC established a key principle surrounding immunities: that one cannot assume the abuse of discretion vested in a public servant. Little has changed since then, with the Court displaying the same anxiety to shield State interests and power, often at the cost of individual rights. Such a privileging also highlights a colonial assumption that has seeped into the Court’s adjudication: the suspicion of people and citizens and their claims.

Ms. Grover elaborated on this by discussing a variety of fake encounter cases, especially those of the 1980s during the Khalistan movement, and highlighted how the Courts only took up these issues after abatement of the political conflict. This, according to her, leads to bigger questions: is passage of a certain amount of time required by the Courts to demand accountability for atrocities? Is it only after the political conflict subsides that the Court can take up these matters? Are other political considerations, apart from rights to life and justice, at play?

She proceeded to discuss the AFSPA enforced in Kashmir and the North-East, which provide a broader scope for immunity to the accused. These Acts not only bar criminal, but also all civil proceedings against Public servants. The matrix of general and special laws in areas designated as ‘disturbed’ create a unique legal code that not only allows for the exercise of extraordinary powers, but also provides for the same statutorily. She then asked, are these powers needed to shield the servants and the populace from conflicts, or do they deepen the same? Do they, in reality, end up shielding human rights violations? Are these disturbed area beyond the limit of the legal order? She discussed the cases of enforced disappearances in Kashmir (the Praveena Ahangar case) to bring home this point, supplemented by cases in the North-East implicating the Assam Rifles (the Manorama case).

She proceeded to analyze the Manorama case which, most notably, made the populace question the need for immunity in cases of sexual violence perpetrated by men in uniform, and the scope of a public servant’s “official duty”. The 2013 amendments to the Indian Penal Code settled this controversy by inserting an explanation, which effectively dislodged the need for a sanction to prosecute public sevrants in cases of sexual violence.

She brought the discussion to a close on this example, highlighting how impunity given by these immunities needs to dislodged; the waiver of  the need for sanctions in cases of sexual violence being a step in this direction. Impunity is not going to disappear, just like conflicts, but needs to be broken down. The roots of this impunity lie in the colonial context, and hence have to be disturbed in a democratic context.

“Rights cannot be held in abeyance”, she concluded, “during political conflicts: that is when they need to be protected the most.”