A Legend Steps Out To Bat On A Dicey Pitch: What Lies Ahead For The New Attorney General For India 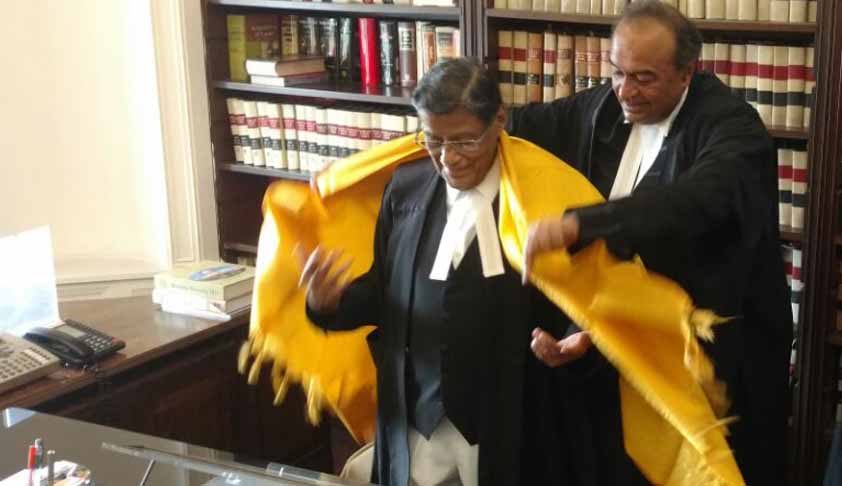 Senior Advocate KK Venugopal, a doyen of the Indian bar is the thirteenth lawyer to become the Attorney General for India. At the age of eighty-six, he will also be the oldest man to have been appointed AG. This shouldn’t case any doubts on his ability to do this enormously stressful and important job – anyone who has seen him in the Supreme Court for a length of time would know that he is...

Senior Advocate KK Venugopal, a doyen of the Indian bar is the thirteenth lawyer to become the Attorney General for India. At the age of eighty-six, he will also be the oldest man to have been appointed AG. This shouldn’t case any doubts on his ability to do this enormously stressful and important job – anyone who has seen him in the Supreme Court for a length of time would know that he is as sprightly and as active as someone less than half his age. In just the last few years, he has handled long running, high profile litigation at the Supreme Court including the BCCI case, the Padmanabhaswamy Temple case among many others. He is routinely appointed to assist the Supreme Court as amicus curiae in highly sensitive matters such as 2G spectrum scam case. He has also been a government law officer in the past, having served as additional solicitor general between 1977 and 1980, in the Morarji Desai led Janata Party government.A veritable galaxy of top lawyers and judges have been his juniors in the initial days of their career.

There can be no two ways about it – Mr Venugopal is more than qualified for the most demanding legal job in the country.

It would be a mistake to consider the Attorney General as just the chief law officer of the Government. A clue to the nature of the job comes from the very first line of this article, as also Article 76 of the Constitution; to repeat, the post is that of the Attorney General for India. Whereas the other law officers are Solicitor General/Additional Solicitor General of India, the Attorney General’s full title suggests that the occupier of the post is more than just another government law officer. He is the only lawyer charged with a constitutional duty and given a constitutional right of audience in any court in India, making him the leader of the Indian legal profession. This right of audience is not limited to only government cases by any means.

KK Venugopal : A Great Human Being And A Jurist Par Excellence

There’s a certain degree of independence that is required of the Attorney General (and likewise, the Advocate General). They are not supposed to be the mere mouthpieces of the party in power, though perhaps outright mavericks may not be suited to the task either. That said, two of the most distinguished government law officers in Indian history, MC Setalvad and HM Seervai are well known for their independence, holding their own against the political executive, including at times, Jawaharlal Nehru himself. Seervai was held up as an example for government lawyers everywhere by C Kemp Davison, QC who said:

“It is... a pity that so few representatives of the host country were present to join the Attorney General for England and Wales in applauding HM Seervai’s magisterial repudiation of the heresy – a heresy which in parts of Africa is alive and well – that a Government lawyer must be committed to the philosophy of the Government which employs him.”

Mr Venugopal’s elevation is interesting because it is also the first time that a Government has appointed an attorney general mid-way through its tenure, without elevating someone from the ranks of government law officers. In the past, wherever an Attorney General has stepped aside before the end of Government’s term, another law officer, usually the Solicitor General, has stepped up to the role. For instance, most recently, in 1983, K Parasaran, then Solicitor General, took over from Lal Narayan Sinha as Attorney General midway through the Indira Gandhi led Congress Government. This perhaps makes Mr Venugopal the first “lateral hire” of an Attorney General.

As AG, Mr Venugopal will not just be representing the Central Government in important cases before the Supreme Court and the High Courts, but also charting out the litigation strategy that the Government should take in defending its laws and policies, such as for instance, Aadhar. So far, the Government has been in no hurry to have the Aadhar case heard by the Supreme Court while moving ahead to expand its use on various fronts. This might prove counter-productive for the Government, as courts pass possibly contradictory orders in each case where its use is challenged. On the other hand, pushing for a quick hearing may also result in the Constitution delivering an adverse judgement in the context of Aadhar that might affect the Government’s policies dramatically. Will he advise sticking to the existing path or see the merit in having the issue settled one way or the other, we will find out soon enough.

The legal opinions of the AG carry weight in the Government and those of someone with Mr Venugopal’s stature, even more so. Mr Venugopal may also be called upon by the Government for his advice and inputs on such diverse matters as the privatisation of Air India and what to do about the Government’s controversial Animal Markets’ rules which are being perceived as a de facto cow slaughter ban. His views and advice on how to navigate the tricky legal terrain will be crucial.

A two-year term, one of which will be the proverbial “election year”, might be too short to get full sense of what Mr Venugopal might achieve in his tenure as the AG. Even so, the challenges that lie before him as the Government’s top law officer and the leader of the Indian Bar are worthy of his abilities and experience.