Legislations enacted/ amended in 2013: A snapshot 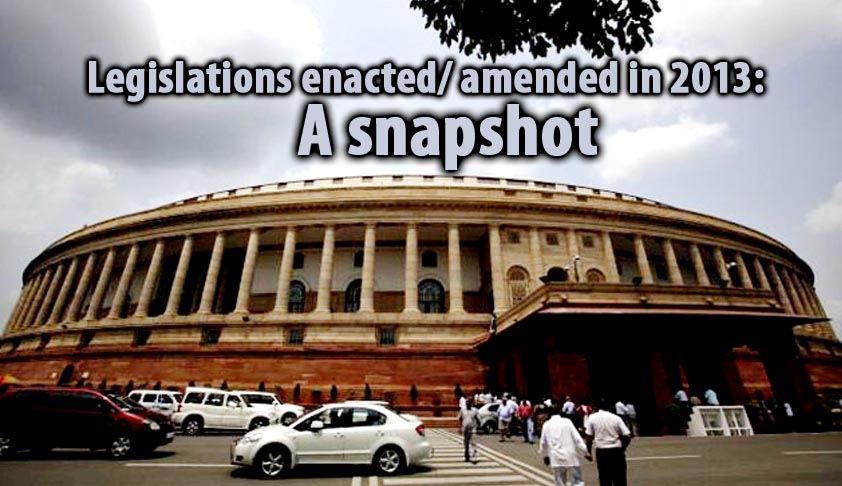 1.      The Enforcement of Security Interest and Recovery of Debts Laws (Amendment) Act, 2012:This Act seeks to amend the Securitisation and Reconstruction of Financial Assets and Enforcement of Security Interest Act, 2002 and the Recovery of Debts Due to Banks and Financial Institutions Act, 1993. The Act proposes to provide for conversion of any part of debt into shares of a...

1.      The Enforcement of Security Interest and Recovery of Debts Laws (Amendment) Act, 2012:

This Act seeks to amend the Securitisation and Reconstruction of Financial Assets and Enforcement of Security Interest Act, 2002 and the Recovery of Debts Due to Banks and Financial Institutions Act, 1993. The Act proposes to provide for conversion of any part of debt into shares of a borrower company.  The Act proposes to include multi-state co-operative banks in the definition of banks in the existing Act.

The Act expands the definition of offence under money laundering to include activities like concealment, acquisition, possession and use of proceeds of crime. The Prevention of Money Laundering Act, 2002 levies a fine up to Rs five lakh. The Act proposes to remove this upper limit. The Act proposes to introduce the concept of ‘corresponding law’ to link the provisions of Indian law with the laws of foreign countries.

The Act clarifies that the ‘proceeds of terrorism’ include property intended to be used for terrorism. It also expands the definition of ‘property’ by using the phrase ‘instruments in any form including but not limited to’ those listed in the original definition. The Act increases the period for which an association can be declared as unlawful from two years to five years.

The new Banking Laws (Amendment) Act 2012 seeks to strengthen the regulatory powers of the Reserve Bank of India. It aims to address the issue of capital raising capacity of banks in India.

The Act defines sexual harassment at the work place and creates a mechanism for redressal of complaints. It also provides safeguards against false or malicious charges. The Act provides for action against the complainant in case of a false or malicious complaint. This could deter victims from filing complaints. Two different bodies are called ‘Local Complaints Committee’. The Act does not clearly demarcate the jurisdiction, composition and functions of these Committees. Cases of sexual harassment of domestic workers have been specifically excluded from the purview of the Act. Unlike sexual harassment legislation in many other countries, this Act does not provide protection to men.

The Companies Act, 2013 has various significant incorporations and amendments like the One Person Company, private companies can have a maximum number of 200 members, first board meeting to be held within 30 days of incorporation, shares other than sweat equity shares cannot be issued at a discount. Various other clauses like the person liable for issuing notice must be penalized if he fails to perform his task. A notice of atleast seven days needs to be given in for meetings. The most significant change brought about by the Companies Act, 2013 is the commencement of the One Person Company.

It speaks of Public Distributive System (PDS), entitlement of children, lactating women and pregnant women. It also deals with the identification of households which are eligible to be fed by the act. The Act provides for the creation of State Food Commissions.  The Act provides for a two-tier grievance redressal structure, involving the District Grievance Redressal Officer (DGRO) and State Food Commission.

The Act seeks to amend the Securities and Exchange Board of India Act, 1992 (the Act). It extends the eligibility criteria for the role of Presiding Officer of the SAT to include sitting or retired Judges of a High Court with a minimum service of seven years. It was earlier introduced as an ordinance on January 21, 2013.  However, the Lok Sabha was adjourned before it could consider a bill to replace this ordinance, which lapsed on April 4.

It provides for the establishment of an Authority to promote old age income security by establishing, developing and regulating pension funds, to protect the interests of subscribers to schemes of pension funds and for matters connected therewith or incidental thereto. This Authority viz. PFRDA shall administer the National Pension System for subscriber’s interest in accordance with the provisions of the PFRDA Act and the rules and regulations framed thereunder. The Authority has the mandate to regulate all other pension funds (other than NPS) which are not regulated by any other enactment. The National Pension System reflects Government’s effort to find sustainable solutions to the problem of providing adequate retirement income.NPS is an easily accessible, low cost, tax-efficient, flexible and portable retirement savings account.

An Act further to amend the Constitution (Scheduled Tribes) Order, 1950 to modify the list of Scheduled Tribes in the States of Kerala and Chhattisgarh.

13.    The Prohibition of Employment as Manual Scavengers and Their Rehabilitation Act, 2013:

There could be an argument for Parliament’s jurisdiction to enact this Act as this regulates conditions of work, and is thus a Concurrent List item. Neither the state nor the centre is mandated under the Act to provide financial assistance for the conversion of insanitary latrines. This may adversely impact implementation of the Act. Offences under the Act may be tried summarily though the penalty could be five years imprisonment. However, under the CrPC, only offences with a maximum imprisonment of two years can be tried summarily. A state government can grant the Executive Magistrate the judicial power to try offences under the Act. It has a wider scope and higher penalties than the 1993 Act.

This Act constitutes the functionality, constitution and the jurisdiction of the Rajiv Gandhi National Aviation University.

The Act makes changes to the composition of waqf boards. The Act changes the term “Wakfs” to “Auqaf”.  “Wakf” is defined as permanent dedication of property by a Muslim for any purpose recognized to be religious or charitable under Muslim law. It also establishes a procedure for removal of a chairperson of a waqf board. Those states which have not yet established a waqf board must do so within one year.

This act states that even if a person is prohibited from voting due to being in police custody or in jail, as long as his name is entered on the electoral roll he shall not cease to be an elector. This implies that he can file nomination for an election. The definition of “disqualified” in the Act has been amended, which means disqualified for either being chosen as or being a Member of Parliament or a State Legislature. The amendment adds a ground to the definition that the disqualification has to be due to conviction for certain specified offences and can be on no other ground.

18.   The Right to Fair Compensation and Transparency in Land Acquisition, Rehabilitation and Resettlement Act, 2013:

Apart from the Acts mentioned, other Acts passed in the year of 2013 are the National Waterway (Lakhipur-Bhanga Stretch of the Barak River) Act, The Constitution (One Hundred and Twentieth Amendment) Act, The Appropriation (No.4) Act, Registration Of Births AND Deaths (Amendment) Act, Citizenship (Amendment) Act, Land Acquisition, Rehabilitation and Resettlement Act, Marriage Laws (Amendment) Act. Though the Lokpal Act is passed in 2013 it is notified in 2014[Act 1 of 2014]