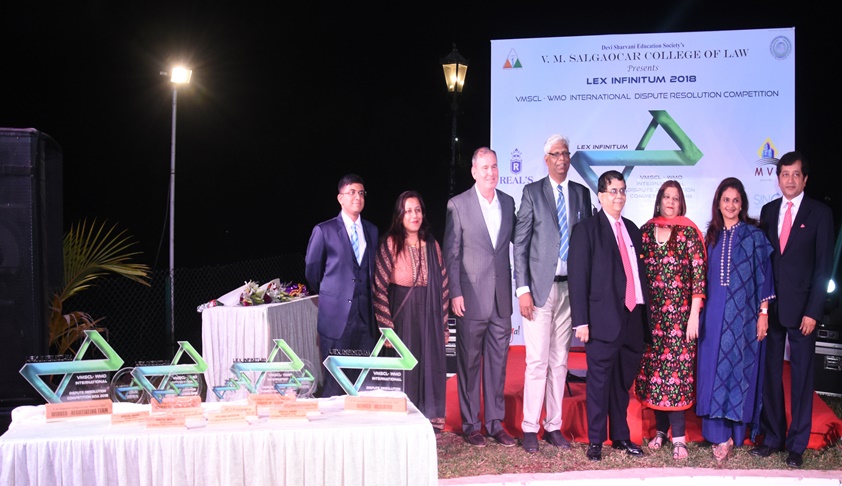 The curtain-raiser for the 3rd edition of VMSCL-WMO International Dispute Resolution Competition  (Lex Infinitum 2018) hosted by VM Salgaocar College of Law, in association with World Mediation Organisation, was held in Panjim city on Wednesday. The event was inaugurated by Cyril Shroff, managing partner at Cyril Amarchand Mangaldas - Advocates & Solicitors, along with Guest of Honour Vandana Shroff, partner at Cyril Amarchand Mangaldas Advocates and Solicitors. Lex Infinitum 2018 will be held till Saturday.

Held at the backwaters of Panjim Convention Centre, Mala, the inaugural ceremony began with a welcome note addressed to the august gathering by Dattaraj Salgaocar, president of Devi Sharvani Education Society. He emphasised the eye-catching popularity of mediation and negotiation in the business arena. An avid supporter since its inception, Salgaocar spoke about the progress of the grand event.

President of Lex Infinitum-2018 John James Samuel introduced and explained the concept of the event after which the dignitaries unveiled the winner’s trophies to be bagged by the awardees.

Cyril Shroff expressed his view on litigation and mediation as modes of dispute resolution and their working methodology in different cases. While making a mention of the Greek legends who introduced the art of negotiation and the origins of mediation amongst humankind and its progress through the ages, he encouraged the crowd of budding lawyers, affiliated mediation experts and scholars to reap benefits of the resources to gain maximum knowledge and expand the horizons of mediation in the country.

The formal function concluded by vote of thanks proposed by director of Lex Infinitum Sandhya Ram.