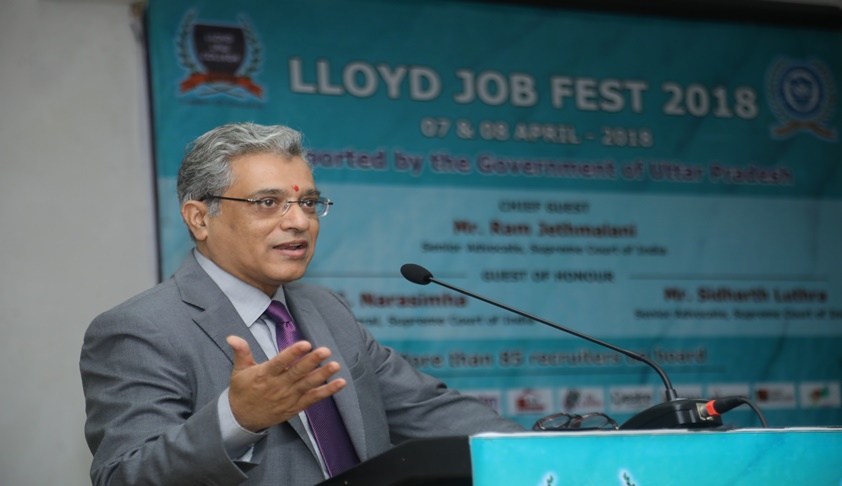 The Lloyd Job Fest was organized by Llyod Law College on 7th and 8th April 2018 in Greater Noida, with Siddharth Luthra as the chief guest.

Siddharth Luthra, senior advocate, Supreme Court of India, while addressing the job seekers from across India advised them to “join as law teachers as there is dearth of good law teachers in the country”. He also recalled his days as a young lawyer before globalization and commented on how the profession has become monetarily beneficial today. Earlier, he added, young lawyers worked under independent established lawyers and today there are corporate houses, LPOs, banks, etc. Also, a case in one part of the world is taken up by lawyers of another part of the world. His advice to budding law graduates was to contemplate on how democratic the legal profession is, and also to think on how it can be made more democratic.

The job fest was a two-day event where recruiters from across India had come on one platform to choose from over 450 job seekers from over 105 colleges. Luthra added that such job fests are like 'swamyavars' where the right match can be fixed by choice.

The inauguration of the Job Fest 2018 was done by PS Narasimha, Additional Solicitor, General of Supreme Court of India. Addressing the budding lawyers, he said: “Do not forget, the purpose of this sector, the main aim is pursuit of truth.” He added that the most difficult part is to find the truth. In law, he said are the three divisions, the plaintiff, the defendant and the judge. He clarified that there is no difference between the lawyer and the judge as both are working with the same aim, their advice is nothing but to decipher the truth.

The Job Fest attracted 60 recruiters and gave them a chance to select from amongst 450 candidates for their organizations.