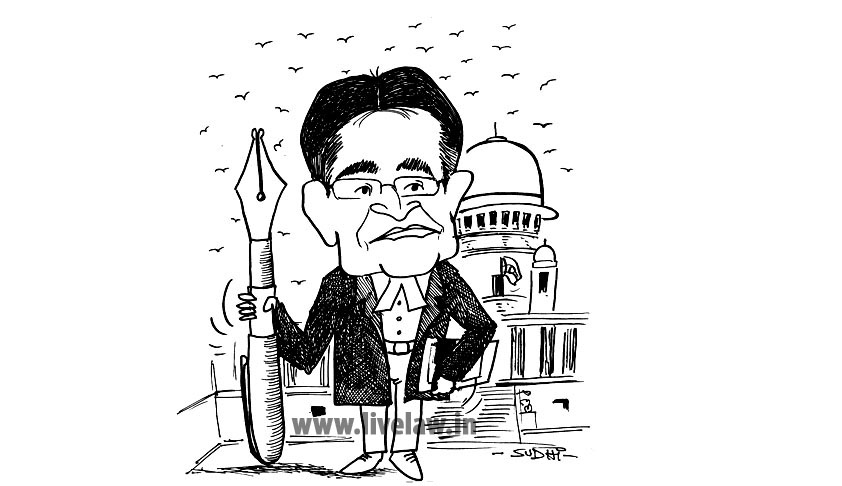 The scene in courtroom no. 1 today was astonishing. A jampacked courtroom with lawyers having experience at bar ranging from a month to over 70 years were present, few to argue and few just to see Chief Justice R.M.Lodha presiding over the last time. Not to mention, the Attorney General Rohatgi, the Solicitor General Ranjit Kumar, Harish Salve, Dushyant Dave, R.P.Bhatt, Ram Jethmalani and...

The scene in courtroom no. 1 today was astonishing. A jampacked courtroom with lawyers having experience at bar ranging from a month to over 70 years were present, few to argue and few just to see Chief Justice R.M.Lodha presiding over the last time. Not to mention, the Attorney General Rohatgi, the Solicitor General Ranjit Kumar, Harish Salve, Dushyant Dave, R.P.Bhatt, Ram Jethmalani and above all Mr. Soli Sorabjee stood tall in the first queue to verbally salute Justice Lodha. Wishes were exchanged and the bench raised together for one final time. The final words of Justice Lodha were very light and comforting when he said smiling- “See you all in the evening.” This was probably the last time everybody had an occasion to see one of the finest chief justices this country has ever had. (considering that the probability of a use of Art 128  is very less).

Justice Lodha was undoubtedly one of the most learned judge and a man of unmatchable caliber. He was always one step ahead of the arguing counsel. Very well prepared and therefore very fast in disposing matters, especially on miscellaneous days. His court went ahead of other benches as he read and understood every matter so strongly that he knew what all arguments can be put forward and what has to be the response of the bench. The rumour in the corridors of Supreme Court infact floats that he actually was the ‘lawyer on the bench’. He was one of the first and the finest products of the collegium system and a true believer &practitioner of the doctrine of independence of judiciary.

Justice Lodha was born on September 28,1949 at Jodhpurto Justice S.K. Mal Lodha, former Judge of Rajasthan High Court. He practiced Law in the Rajasthan High Court, Jaipur and dealt with all branches of law : Constitutional, Civil, Company, Criminal, Taxation, Labour, etc. He was elevated as a Permanent Judge of Rajasthan High Court on January 31, 1994 & was transferred to Bombay High Court where he assumed office on February 16, 1994. He remained a judge in Bombay High Court for almost 13 years the impact of which could be witnessed in his typical “Maane” which he frequently uttered during court room proceedings. He was re-transferred to Rajasthan High Court where he assumed office on 2nd February, 2007 and later sworn in as Chief Justice, Patna High Court on 13th May, 2008 where again he had a short tenure as the chief when he was elevated to the Supreme Court on 17th December, 2008.

So, 17th Dec 2008 to 26th Sept 2014; a journey of almost 6 years with one and only agenda of upholding the rule of law and efficient justice delivery. Within this long span, came a short period of 5 months as the Chief Justice of India and unfortunately during this period the court observed vacations for around one and a half month. Still, during his tenure as the CJI, he made very important decisions. The first of which was to value the briefs/files and add a thick tier beneath the files which were circulated to judges. He then went on to publish on page 1 of the cause lists that the practice of asking for adjournments by AORs should not be prayed for before all the courts. He gave nod to the Supreme Court Rules, 2013. Feeling aggrieved by few of the new provisions and improper representation the SCBA and SCORA approached his court through a writ to which he agreed to hear but posted to a different bench. Such was his integrity. Justice Lodha also went to publicly say that the courts should also work 365 days a year which though received some criticism but was welcomed by those who want the pendency and backlog of cases to be cured. The landmark judgments relating to deallocation of illegally distributed coal blocks, quashing of Sec. 6A of DSPE Act, 1946, holding rights of Under trial prisoners under Sec 436A CrPC and a lot more show his enthusiasm and dedication to uphold the rule of law in the country.

Justice Lodha always respected all the senior counsel from the bottom of his heart and with due honour always valued their able arguments. During the final hearing of Manoj Narula v UOI, he saw Mr. K. Parasaran and Mr. Andhyarujina sitting in his court and observing the very complicated issue. He sought their help which they readily delivered. His respect for the bar is also evident from his brave decision of elevating Justice Nariman, Justice U.U.Lalit and Gopal Subramanium to the bench. Though, the controversy attached to Gopal Subramanium’s non elevation later raised an alarm but with his tactfulness he managed everything holding very clearly that he will not tolerate any threat to the independence of judiciary at all. Holding his loyalty to the collegium system he was always very clear in saying that collegium system is undeniably something which this country needs. Subsequently, when a challenge to the JAC Bill came up for hearing, he put it for hearing to a separate bench. During the further hearing of the coal scam, Salve made a statement about Mr. Vahanvati, Justice Lodha took an objection immediately and said that he was no more and the efforts he put in the case were commendable. His last coal hearing was however marred by the conduct of senior counsel Vikas Singh when Justice Lodha had to raise his voice and ask the learned counsel not to hijack the court proceedings. But keeping his calm, he still gave him the benefit of audience. Even then he raised concerns over conduct of counsel in court and said if this is happening in the first court of the country what would have been the position in lower courts.

The next CJI will be Dattu J. Another judge of strong caliber and equal enthusiasm and speed. But the vacuum created by Justice Lodha’s absence can never ever be filled. May he live long and keep guiding us in one way or the other.

I will end this piece by quoting Justice Lodha’s favourite words – “Look, look, look…”, to which I feel like responding “I want to come to your court & look up to you again my lord, and look again and again, but how to do that now” How I wish his term was more and I am sure my learned friends at bar think the same. As he always said “Neither here nor there..”, without his presence at the bench, young members of bar like me actuall feel no where.

Namit Saxena is an Advocate at Supreme Court of India