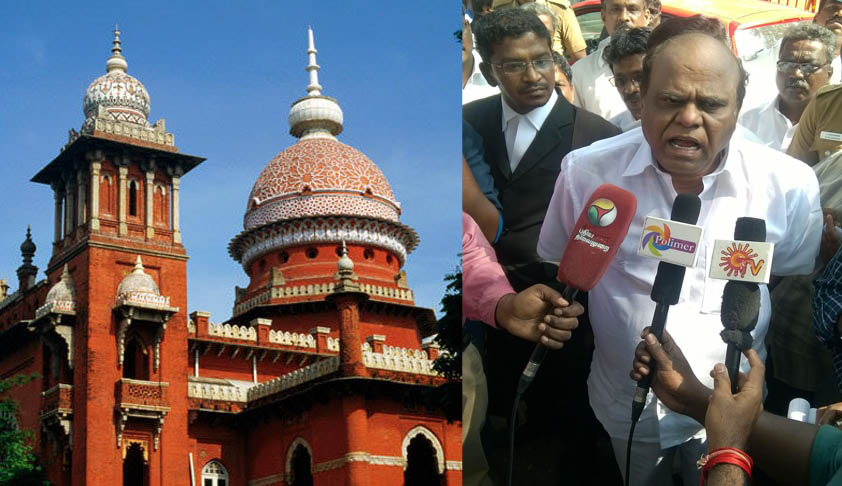 Madras High Court Judge Justice C.S.Karnan Today stayed the transfer order issued to him by the Supreme Court of India transferring him to Calcutta High Court.

He also directed the Chief Justice of India to file the reply by April 29.

Chief Justice of India T.S. Thakur on Friday indicated towards an end to the judicial standoff being faced by the Madras High Court, over the conduct of Justice C.S. Karnan. When Senior Advocate K.K. Venugopal appearing for the High Court Registrar General urged the Bench to list the appeal against Justice Karnan’s order early, the CJI said that the petition will be listed on Monday.

LiveLaw had reported on Saturday that the CJI has ordered transfer of Justice Karnan to Calcutta High Court.

Earlier In a letter to the Chief Justice, Justice Karnan had alleged that he was left out of the Tamil Nadu State Judicial Academy as he was from the scheduled caste. He had claimed that all participants were from the upper caste and that his name was removed in order to make way for a Junior Judge who belonged to the upper caste.

In May 2015, Justice Karnan had passed another order requesting the Chief Justice to extend co-operation “without any interference with my Court’s proceedings and its Judicial Power in order to maintain the decorum of the Court and avoid an unhealthy practice of Judiciary in the interest of the general public. He also requested the Chief to avoid ego and stop acting in an autocratic manner to protect democracy.”

The controversy had started with Chief Justice Sanjay Kaul constituting the recruitment committee comprising of Justices V. Dhanapalan, R. Sudhakar, D. Hariparanthaman, N. Kirubakaran and R. Mala to interview candidates for selection as civil judges. The Tamil Nadu Public Service Commission chairman and other officers were to be part of the selection committee and it was scheduled to start oral interview of candidates from April 15 till April 21.

Justice Karnan has been notorious for making serious allegations against his other fellow Judges as well. In May last year, he had alleged that a Judge of the Madras High Court had assaulted an intern within the High Court premises. “I have preferred several representations to your Lordship regarding the conduction of enquiry on the custodial rape committed by Mr. Justice XXXXXX (name withheld) on the law intern Miss XXXXX (name withheld) at the Madras High Court,” he had written to the Chief Justice of the High Court. You may read the LiveLaw articlehere.