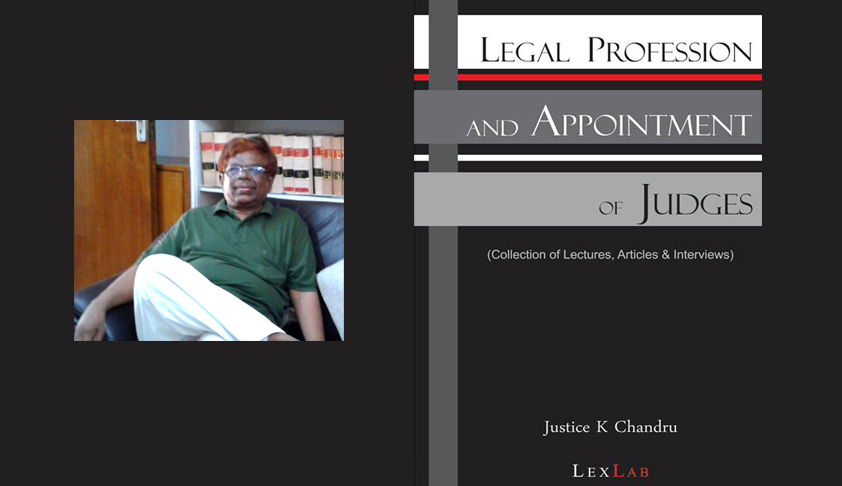 Former Judge of the Madras High Court, K Chandru, popularly known as people’s judge has launched his latest book, “Legal Profession and Appointment of Judges”. The book is a collection of Lectures, Articles and Interviews dwelling upon the area of legal profession and judicial appointments in this country.

The book which has a foreword from Justice VR Krishna Iyer has been divided into fifteen chapters and each of them throws light into the various aspects. Justice Krishna Iyer in his foreword wishes that our lawyers and law teachers make Justice Chandru’s book an obligatory reading. He adds, “Justice Chandru, whom I knew as a boy, was democratic to the very core.  As a lawyer, he identified himself with jurisprudence of the proletariat. As a judge, he was sensitively responsive to the constitutional imperative of a socialist, secular democratic Republic.”

Live Law’s interview with Justice Chandru is also included as a separate chapter in the book.

The author, Justice Chandru comes with his legacy of clearing over 96,000 cases in a span of less than 7 years at the Madras High Court. Chandru, whose elevation as a judge was preceded by not just legal practice but core grass-root labour rights activism, has been considered a visionary, albeit a humble one. He writes frequently for national dailies, magazines and web portals on the judiciary and the legal system.

Priced at INR 225, the book is published by Lexlab, a publishing start-up headed by legal journalist, Raghul Sudheesh. Speaking to Live Law on the launch of the book, Raghul said “It is a great privilege for us that our first publication has been authored by someone so reputed as Justice Chandru and on such a hot topic like judicial appointments. We are in discussions with various authors and hope to release 3-4 books in this academic year itself.”

You can buy the book from Amazon India here.