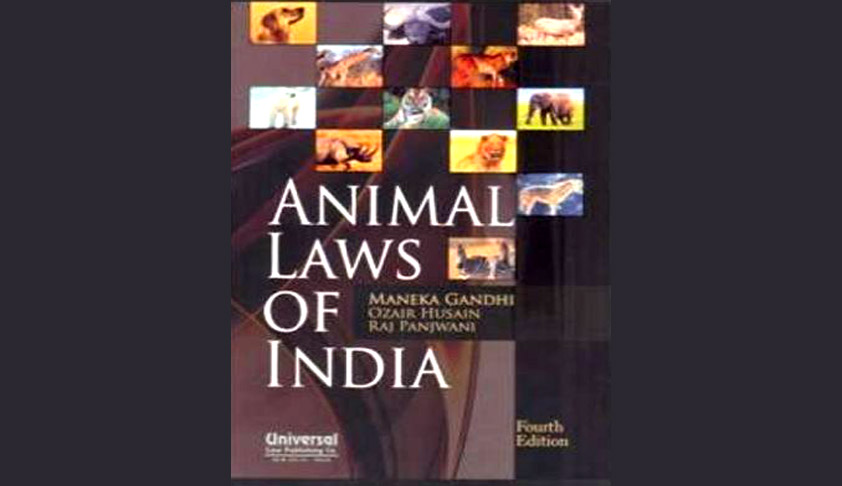 In a letter to Bar Council of India Chairman Manan Kumar Mishra, Union Law Minister Sadananda Gowda has recommended to books written by his cabinet colleague Maneka Gandhi on animal rights in the curriculum of law schools and colleges. Mr. Gowda was reportedly reacting to letters from Gandhi, highlighting lack of awareness about animal welfare laws.

The Law Minister wrote, “…leaving aside the meat consumption issue for the time being, we need to sensitize our citizens about cruelty caused by us to animals in many forms while using them for farming purpose, religious activities, sports activities, recreational activities like circus and while transporting animals etc. We need to make lawyers acquire comprehensive knowledge on various laws governing animal rights and prevention of cruelty to animals. The best way to start forward is to include these aspects in the curriculum of law colleges.”

He further stated, “I am herewith attaching a list of Acts pertaining to animal rights and also the books written by Smt. Maneka Gandhi for including the same in the curriculum on law schools and colleges.”

Describing the recommendation of a particular book as “unethical”, as said that animal welfare laws are already covered in law schools under the environment head.

“There are many good books by lawyers, judges etc. Ethically recommending one particular book should not be done, I have never seen anybody recommending anybody’s book. Besides law universities are autonomous institutions where we already teach Wildlife Protection Act etc under the environment section. Bar council does lay down compulsory and non compulsory courses but nothing can be imposed on the 1400-odd law schools,” he told Indian Express.

This view was supported by Dr S.N. Singh, former dean of Law Faculty Delhi University, who called the recommendation “highly objectionable”. He said, “Even Bar Council does not have the mandate to do so. It is wrong to recommend a particular book. Only one book on Professional Ethics, that too because books on the subject are not easily available — the council suggested in an indicative way that it may be used. Otherwise, it is the call of law schools what books they teach. As for animal welfare laws they are covered a bit under environment and also when Article 51A of the Indian Constitution is taught that talks of compassion to animals as one of the duties of a citizen.”

Mr. Gowda has also written to the Chief Justices of High Courts and Chief Ministers, urging them to conduct annual workshops for Judges and Public Prosecutors aid in the adjudication of cases of cruelty to animals. He reasoned that this was necessary, “since no law college takes up animal laws as a subject”.

His letter says, “Handling of these (cruelty to animals) cases is different from other civil or criminal matters and the procedures are complex. Professional legal assistance with expertise in handling of these cases is hard to find since no law college takes up animal laws as a subject… it is important that sensitization workshops be held in the State Judicial Academies for judges and prosecution officers each year. This would also assist them in gaining more insight into cases pertaining to veterinarian malpractice, housing disputes over ‘no pets’ policies and civil cases on death or injury to pets or companion animals.”

The Animal Welfare Board of India, a statutory body formed under the Prevention of Cruelty to Animals Act (PCA) 1960, has already course materials and master trainers for the Bureau of Police Research and Development and the Ministry of Home Affairs. Animal welfare laws are now mandatory at all police training colleges.