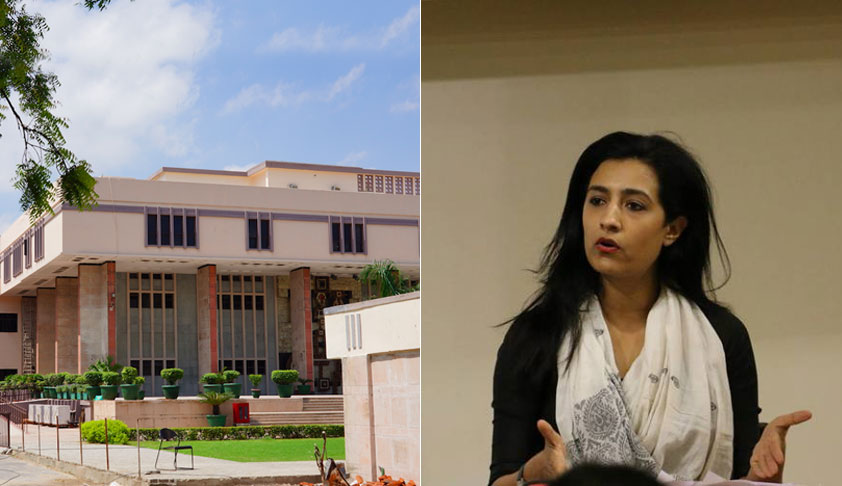 Pressing against provisions allowing “legal rape” of married women and the unconstitutional classification of rape victim as married, married but separated and unmarried, the RIT Foundation and The All India Democratic Women's Association (AIDWA) has submitted before the Delhi High Court that when sodomy, sexual assault, murder are not de-criminalised in marriage, there is no reason rape should be.

Karuna Nundy, counsel for petitioners RIT Foundation and AIDWA (intervenor) said through her oral and written submissions before the Hon'ble Delhi High Court, that the fiction of legal marital rape created by Exception 2 of Section 375 of the Indian Penal Code, 1860  has caused millions of women to be legally raped. The government's own latest data shows 6 per cent of married women were sexually assaulted by their husbands.

Relying on the Supreme Court's judgement in the Independent Thought case which criminalised the rape of child wives between 15 and 18, Ms. Nundy cited extensively aspects of the ratio which also apply to adult women. Relied upon also was the  a nine judge bench in Justice (Retd) KS Puttuswamy vs Union of India (Privacy judgement), the petitioners said the court has recognised the value of physical integrity and sexual autonomy under Article 21.

She stated that “even if one married woman suffers her constitutional rights being violated by legal rape, she must have the protection of the Constitution of India as she cited the observation of the apex court in the privacy judgement wherein it is stated that, “The purpose of elevating certain rights to the stature of guaranteed fundamental rights is to insulate their exercise from the disdain of majorities, whether legislative or popular. The guarantee of constitutional rights does not depend upon their exercise being favourably regarded by majoritarian opinion”.

The UN Women Global Database also reports that the proportion of women aged 18–74 experiencing intimate partner physical and/or sexual violence at least once in their lifetime is as high as 37%.

Rape within marriage in the twenty first century, continues to be legalised by criminal laws of 1860.

The petitioners go on to add in their written submission that, “The Exception to Section 375 was drafted on the basis of the Victorian patriarchies of 1860 that did not recognize men and women as equal. From 1950, the Indian Constitution provided key fundamental rights, to all citizens of India, irrespective of class, religion, race, sex and place of birth; further vide Article 13(1) it declared void, all provisions of laws existing as of 1950, found to be inconsistent with these inalienable fundamental rights of a citizen”.

The irrational classification of rape victims

The petitioners highlight the classification as under:

Stressing how Exception 2 to Section 375 of IPC provides for an explicit exemption for rape within a marriage while Section 376B IPC and Section 198B of the Criminal Procedure Code, 1973 provide for unequal treatment of a rape victim separated from her husband at the time of rape, the petitioners said, “In contemporary India the impugned provisions that legalise marital rape and treat the rape of separated women unequally, are fundamentally opposed to women’s constitutionally recognized basic rights of equality, right to life and dignity”.

It said while the married women across India are being legally raped everyday, the Centre is taking a contrary stand based on vagaries like 'the institution of marriage', is an institution destroyed by criminal behaviour in particular marriages, or those specific marriages? Surely it is the violence that harms the marriage, not protection from that violence by the State.

The touchstone of Constitutional framework

It cited the observation of the Supreme Court in case titled Romesh Thapar v. The State of Madras wherein it was held that, “Where a law purports to authorise the imposition of restrictions on a fundamental right in language wide enough to cover restrictions both within and without the limits of constitutionally permissible legislative action affecting such right, it is not possible to uphold it even so far as it may be applied within the constitutional limits, as it is not severable. So long as the possibility of its being applied for purposes not sanctioned by the Constitution cannot be ruled out, it must be held to be wholly unconstitutional and void.”

The petitioners said Article 14 prohibits discrimination not only by a substantive provision but also procedural law.

“Exception 2 to section 375, Section 376B of IPC and Section 198B of the Criminal Procedure Code, 1973 classify rape victims into three categories based on their marital status i.e. married, married but separated, and unmarried.

“The above three classifications of women who are victims of rape would be constitutional if and only if the classification is based upon sound intelligible differentia which has a rational relation to the object sought to be achieved by the impugned provisions. In the present case, the Union of India has failed to disclose the object or purpose sought to be achieved by itself in classifying rape victims into these three categories. Indeed through the impugned provisions, the Union has purposefully refused to recognize and accord equal rights to women in a marriage,” it says.

“Indeed, under Sections 354,377, 302, 323 IPC there is so such exemption – if sodomy, sexual assault, murder and simple hurt is not de-criminalised in marriage, there is no reason rape should be,” the petitioners say.

Quoting from Anuj Garg & Ors. Vs. Kotlal Association of India and Ors where the Supreme Court examined Section 30 of the Punjab Excise Act that prohibited employment of any man under the age of 25 years or “any woman” from bars and held the same as violate of Article 14 of the Constitution, the petitioners said, “No law in its ultimate effect should end up perpetuating the oppression of women. Personal freedom is a fundamental tenet which cannot be compromised in the name of expediency until unless there is a compelling state purpose”.

Marital rape vs protecting men from misuse of law

It is sometimes argued that the object of the impugned provisions is to protect men against misuse of laws by their wives, in case of a bitter marriage/divorce.

To this, the petitioners say in the written submission, “the said object is not only unfounded and misplaced but also dis-entitles innocent rape victims who face violent sexual assault by their husbands without adequate protection or support from the law”.

As an example, it say, “Indeed any law may be misused, the law of cheating under Section 420 is often cited when contracts break down in order to pressurize a defaulting party, however the laws on perjury and malicious prosecution are appropriate remedies rather than the decriminalization of cheating”.

It also adds that Parliament passed the Protection of Women from Domestic Violence Act, 2005, clearly recognizing the need to protect women suffering violence in their relationships, i.e. at the hands of the husband or a live-in-partner and/or their in-laws. The threat of misuse of the said law did not prevent Parliament from empowering women and protecting them from physical, mental, emotional and economic violence committed in a domestic relationship.

The Article says the State shall not discriminate against any citizen on grounds only of religion, race, caste, sex, place of birth or any of them.

The exception to Section 375 assumes non-retractable consent of women to sexual intercourse upon marriage. This assumption reinforces various gender stereotypes leading to the subordination of women and hence is violative of Article 15 of the Constitution.

The impugned provisions also further discriminate against married women vis-a vis women who are either separated from their husbands and/or not married, thereby violating not only Article 14 but also discriminating on the basis of marital status, which is an implied ground of protection under Article 15.

Article 19 (1) says all citizens shall have the right—to freedom of speech and expression;

Article 21 provides that no person shall be deprived of his life or personal liberty except according to procedure established by law.

It cites the case of Suchita Srivastava v. Chandigarh Administration wherein the Supreme Court recognised a woman’s right to make reproductive choices as a dimension of “personal liberty” under Article 21 of the Constitution.

"In that judgement, the apex court explicitly stated that: “it is important to recognize that reproductive choices can be exercised to procreate as well as to abstain from procreating. The crucial consideration is that a woman’s right to privacy, dignity and bodily integrity should be respected. This means that there should be no restriction whatsoever on the exercise of reproductive choices such as a woman’s right to refuse to participate in sexual activity or alternatively the insistence on use of contraceptive methods”.

The above observations of the Hon’ble Court do not make a distinction between the rights of married women and unmarried women. The right to abstain from sexual reproductive activity has been recognised for all women, irrespective of their marital status; the impugned provisions of the Indian Penal Code as also the Criminal Code are in clear violation of the basic fundamental rights of women and must be struck down and declared as unconstitutional.The Supreme Court in Privacy judgement decided that all citizens, including married women, have a right to privacy."

Drawing a logical corollary between the SC observation in D.K Basu vs. State of West Bengal where it was held that a prisoner does not shed his right to life and dignity, the petitioners say, “Similarly, the right of married women to choose, the right to indulge or abstain from sexual intercourse with the husband cannot be far from the rights of a prisoner under law; married woman do not shed their right to choose/consent and be free from rape simply by being married”.

They also cite the court observation in Court on its Own Motion (Lajja Devi) v. State which noted the anomaly in the exception to Section 375 as follows, “the exception to Section 375 specifically lays down that sexual intercourse of man with his own wife, the wife not being under fifteen years of age is not rape, thus ruling out the possibility of marital rape when the age of wife is above fifteen years. On the other hand, if the girl is not the wife of the man, but is below sixteen, then the sexual intercourse even with the consent of the girl amounts to rape? It is rather hocking to note the specific relaxation is given to a husband who rapes his wife, when she happens to be between 15-16 years.”

The petitioners say on December 22, 2012, the Central Government appointed a judicial committee headed by (retd.) chief justice of India, Justice J.S.Verma which recommended striking down of exception 2 to section 375 IPC but the same was not included in the amendment.

The petitioners also cite example of countries which have moved away from exception to marital rape.

In Australia, in the case of R v. L in 1991, the court ruled that if it was ever the common law that by marriage a wife gave irrevocable consent to sexual intercourse by her husband, it is no longer the common law.” It further asserted that that a husband could be found guilty of raping his wife.

In a 1995 case titled SW v UK, the European Court of Human Rights while upholding the conviction of the accused for marital rape stated that, “the abandonment of the unacceptable idea of a husband being immune against prosecution for rape of his wife was in conformity not only with a civilised concept of marriage but also, and above all, with the fundamental objectives of the Convention, the very essence of which is respect for human dignity and human freedom”.