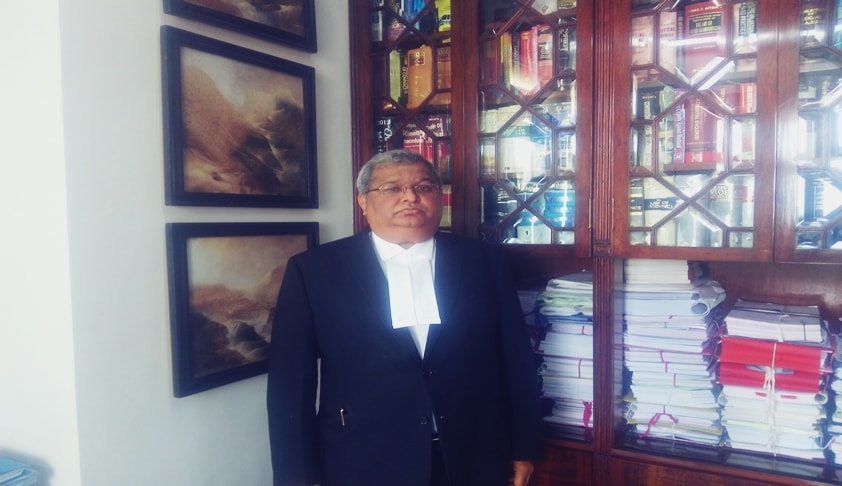 One of the most sought-after criminal lawyers in the country, Senior Advocate Amit Desai has had a career spanning over three decades. Desai, who comes from a family of lawyers, discovered that his interests lie in the area of criminal law after having the opportunity to work on a number of important cases such as the 1984 Bhopal gas tragedy and the securities scam at a very young...

One of the most sought-after criminal lawyers in the country, Senior Advocate Amit Desai has had a career spanning over three decades. Desai, who comes from a family of lawyers, discovered that his interests lie in the area of criminal law after having the opportunity to work on a number of important cases such as the 1984 Bhopal gas tragedy and the securities scam at a very young age.

Desai argued Bollywood actor Salman Khan’s appeal in the hit-and-run case and got him acquitted. He also appeared for former Chief Minister Ashok Chavan in his challenge to the Governor’s decision to allow the CBI to prosecute him in the Adarsh scam case.

Desai also secured relief for a web journalist, who was booked under the Official Secrets Act for conducting a sting operation on the treatment meted out by senior Army officers towards jawans under the Sahayak system.

Having appeared in such high-profile cases, Desai shares his opinion on the role of media in reporting on sensitive cases and the repercussions of misreporting, while fondly remembering stalwarts of the legal profession like Nani Palkhivala and Fali Nariman.

Speaking to Live Law, Desai emphasises on the need for a better case management system to solve the problem of pendency.

LiveLaw: You have appeared in a number of high-profile cases. In your opinion, how can the quality of investigations be improved and how do you see the media’s role in reporting sensitive cases?

Amit Desai: The media is obviously important. But, often, its reporting pre-judges the case and the offenders. This puts enormous pressure on the criminal justice system to show performance. Reputations are often irredeemably lost, investigations are mired in controversy, and charge sheets are filed. When the media builds public opinion, the agencies are under pressure. The unjustified FIRs, investigations or charge sheets all affect institutional integrity.

The media needs to play its role: to debate and discuss fairly. It has a democratic responsibility to report accurately and without scandalising the matter, regardless of whether the judgment is in favour of the victim or the accused.

The late Justice Sarosh Kapadia penned the Constitution Bench decision on balancing freedom of the press and an accused’s right to a fair trial. We must question whether the media has recognised what was said i.e., that the right to fair trial is higher than the right to free press?

Having said that, we also need to improve the quality of investigations and bring in more technology, specialisation, talent, and integrity.

There is a need to bring back the bygone respect for our institutions. The malaise of corruption has cast its shadow so far and wide that we have now inverted the presumption of honesty to a presumption of dishonesty. Unhappy litigants and unpopular decisions give rise to often unjustified allegations. The allegations gain prominence over the decision. We must find ways to bring back respect for our institutions.

We also need a strong public prosecutor system.  We must respect them and pay them far more than what they currently earn.

LiveLaw: There is in fact a band at the edge of the big table in CJ Manjula Chellur’s courtroom that says court reporter.

Amit Desai: That is correct. If I remember correctly, even the Chief Metropolitan Magistrate’s Court at the Esplanade Court has a separate section for journalists. Courts have always been conscious of the role of the media. Earlier they only reported; there were no undue emphasis, opinions, interpretations or angles. That has all changed. Now we often see campaigns.

LiveLaw: Can you comment on the role of the CBI?

Amit Desai: Despite it being a premier investigating agency, we should not transfer cases to the CBI in every other matter. Investigations may be transferred on case-by-case basis, but not on general consent. Also, the state police must be given adequate training so that they may be at par with the CBI. There must be clear demarcation between the jurisdiction of the CBI and state police.

LiveLaw: If we look at the Salman Khan case, the process of collection of evidence enshrined in law came to the fore as there was a failure on part of investigators to collect and store some samples of Salman’s blood correctly.

Amit Desai: The matter is pending in the Supreme Court and hence I would not like to comment on the same.
Collection and maintenance of the integrity of body fluids and other DNA samples is crucial to modern day investigations. However, officers don't seem to be adequately trained in this regard. This often results in improper investigations.

LiveLaw: What are the dynamics of deterrence and sentencing of crimes?

Amit Desai: The object of criminal law is to prevent crime. But this objective must be balanced against the punishment meted out. I believe in granting discretion on sentencing to courts. One can introduce separate sentencing guidelines that can guide courts on the quantum of sentence and avoid arbitrariness.

For example, consider sexual offences, either the crime of unnatural sex (s. 377 IPC) or statutory rape (ss. 375/376 IPC). In the contemporary society, should there be punishment of imprisonment of upto 10 years (for unnatural sex) or between 7 years and life imprisonment (for statutory rape). Society has evolved: homosexuality is commonplace; under 18-year olds have sexual relations; inter-caste relationships are common. Often, we see complaints being filed at the behest of non-approving parents or ex-partners in relationships that have gone awry. Should such complaints all carry minimum jail sentence of 7 or 10 years? How does one distinguish between a relationship gone sour and a genuine case of rape? Only evidence can tell.

LiveLaw: Do you come from a family of lawyers, how did you get into law?

Amit Desai: My late father was also a Senior Counsel practising on the criminal law side. So also, was my grandfather.

However, in my early days, I practiced civil law. I was involved in two important civil litigations: the LIC vs Escorts battle in 1983 and an arbitration dispute between Renusagar and General Electric. In LIC vs Escorts, I had the opportunity to work with K. Parasaran, the then Attorney General. Hearing Fali Nariman, on other side, was a treat. It was one of my most enriching experiences.
In the arbitration dispute, I was being led by Nani Palkhivala.
I was very fortunate to grow up amongst the stalwarts of the profession at such a young age.

LiveLaw: Did you always want to study law and why Criminal Law?

Amit Desai: I first did my B.Com and during my studies, I debated whether to go down a very different path of business rather than law. But in my final year of my B.Com, I decided to do law. I suppose the fact that I came from a lawyers’ family played a part in that decision.

I joined the bar in 1982. I got the opportunity to be involved in a lot of important cases such as the Bhopal gas tragedy in 1984, the Bofors imbroglio, the securities scam, etc. That was how I saw the implications of civil law in criminal cases. This started drawing me into the criminal law space.

I received many opportunities to conduct trials. Trial work is about a deep analysis of facts and law, and the challenge of anticipation in cross examination of witnesses that one is pitted against.

In 1992, criminal trials were once again conducted before the Bombay High Court; that had not happened since the late 50s when the original criminal jurisdiction of the HC was taken away. Those trials were undoubtedly some of my best experiences.

LiveLaw: Do you think juniors now get as many opportunities to argue cases like your generation did?

Amit Desai: I think there are a lot of opportunities to argue. I tell the youngsters that it is for them to make the legal profession challenging and interesting for themselves. But also to have some patience.

Every matter that comes their way, they must push themselves, read the law, the section, the precedents and see if they can evolve a different sort of nuance on the same set of facts.

LiveLaw: Do you notice a difference in the judges in the high court then and now?

Amit Desai: The one big difference I see is the pressure that has come on the justice system over the last 25-30 years.

Amit Desai: I believe that the Collegium system should be around for some more time, of course with modifications.

LiveLaw: In terms of bringing back respect for these institutions, where does the buck stop?

Amit Desai: With the institutions themselves, but with a lot of help from the media!

LiveLaw: On the issue of pendency, ex-CJI TS Thakur made an emotional appeal to the government to appoint more judges because Indian judges clear more cases than any other country. What is your view?

Amit Desai: When we talk about the problems today, in my view what we need to do is to ensure that the quality and calibre of judges being appointed is very high.

Further, we need to have a better case management principle. There is a fair amount of deadwood in the system (i.e. cases, criminal and civil, pending for decades). We must have the ability to take bold decisions to get rid of this deadwood.

Take the example of criminal matters: whilst every crime ought to result in punishment if the crimes have remained unpunished for decades, then it is irrelevant to society whether someone is finally punished years later.

The offender has suffered the consequences of sheer harassment of the system for decades and majority of the victims have lost interest in any kind of salvation by the process of getting a conviction. Of course, there would be some exceptions to this.

So, we need to find a way to close these cases as they are a huge burden on the system socially and financially.

LiveLaw: Commercial division benches are being designated out of the existing batch of judges, therefore in some way the purpose of the act of having specialised commercial courts and clearing pendency takes a beating.