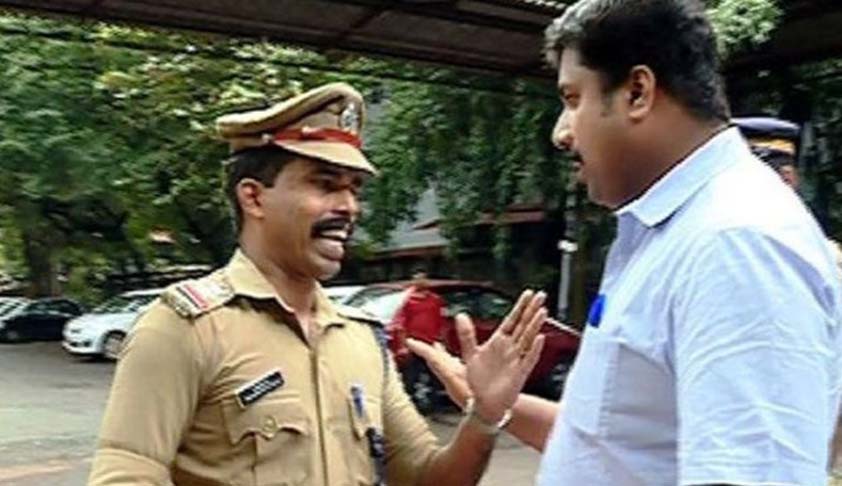 High Court of Kerala has stayed all the further proceedings against Sub-Inspector PM Vimodh (now under suspension) pursuant to FIRs in Crime numbers 668 and 669 of 2016 of the Town Police station, Kozhikode pending disposal of the Writ Petitions filed by him for quashing the FIR against him. The Petitions were moved by more than 100 Lawyers from Kerala High Court for and on behalf of Mr.Vimodh [See the full list here]. He was arrayed as an accused in the Kozhikode Court incident and faces indictment under Sections 323, 342 and 506 (ii) of the Indian Penal Code read with Section 34 of the Indian Penal Code. The FIR was registered on the basis of a statement given by K.Jayesh, Reporter, Media One TV for allegedly abusing and preventing media persons from entering the Kozhikode court premises. It is also alleged that the de-facto Complainant was manhandled and threatened with life by the petitioner and other three identifiable policemen. When he asked as to why he was so assaulted, he was locked up inside the police station and showered with abuses. He also apprehends assault from the petitioner. The arguments were led by Senior Advocate P. Vijay Bhanu

Justice Kemal Pasha who heard the matter Today has observed that, on going through the First Information Statement, based on which the crimes have been registered, presently seems that there are no specific allegations at all in order to invite the aforesaid offences.

“It is a fact that the investigation has to be continued. True, that the matter has invited much media publicity. At the same time, this Court is of the view that solely because of such media publicity, this Court cannot deny what is being given by this Court to a common man, to the petitioner, who happens to be a Sub Inspector of Police. It is true that as rightly pointed out by the learned State Attorney, the police has to investigate that matter. At the same time, in case any investigation is not warranted, unwarranted investigation may put the petitioner in hot waters, he being a Sub Inspector of police. It seems that he has been placed under suspension. Continued investigation at this point of time without looking into other materials may add insult to the injury. In such case, this Court is of the view that for the time being the continued proceedings pursuant to Ext. P1 in both these writ petitions can be stayed till 16.08.2016” , Justice Pasha added.

It is also submitted that the so-called offences alleged by the media men were committed by the petitioner in good faith and in the due discharge of his official duties under the provisions of the Kerala Police Act, 2011.

“The petitioner had acted on the verbal communication by the 4th respondent and the learned District & Sessions Judge, Kozhikode, who had specifically ordered to prevent media persons from entering the Court premises. The petitioner had sincerely discharged his duty. The petitioner is known as uncompromising to any influences. The case of the 3rd respondent is one which is most unlikely and improbable to happen. Camera eyes were too focused on the petitioner all throughout and if any such incident happened, the same would not have escaped the lens men”, states the Petition.