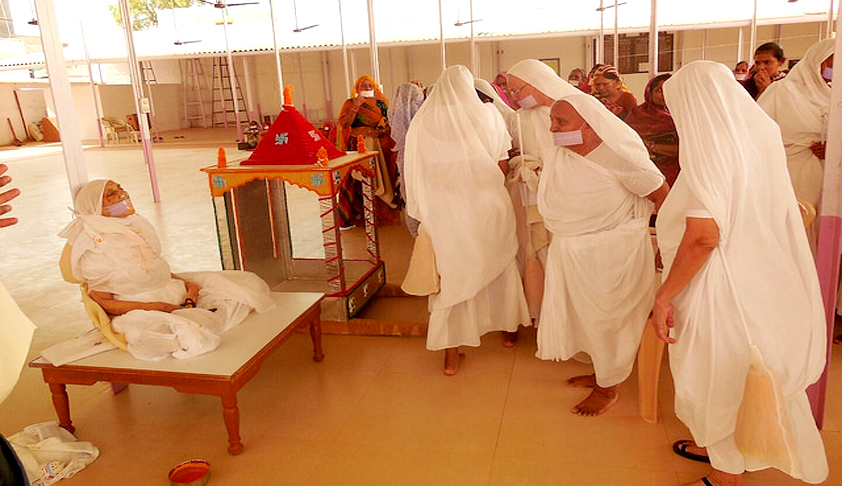 An association of members belonging to the Jain community has filed a petition today before the Supreme Court seeking leave to appeal against the August 10 judgment of the Rajasthan High Court declaring the Jain ritual of 'Santhara'  as not being an essential tenet of Jainism and holding it to be an offence punishable under section 306 and 309 IPC.Santhara is stated to be a voluntary...

An association of members belonging to the Jain community has filed a petition today before the Supreme Court seeking leave to appeal against the August 10 judgment of the Rajasthan High Court declaring the Jain ritual of 'Santhara'  as not being an essential tenet of Jainism and holding it to be an offence punishable under section 306 and 309 IPC.

Santhara is stated to be a voluntary tradition prevalent among the members of the Jain community of fasting till death as they believe it would help them attain salvation.

The judgment of the Rajasthan High Court came in a PIL filed by an activist who contended that the practice was against law.

The petitioner before the Rajasthan High Court,  Nikhil Soni had sought a declaration that the practice is illegal on the ground that it amounted to suicide, which is a criminal offence and is punishable under section 309 IPC.

The petitioner describing the practice of Santhara as abhorrent to modern thinking, had submitted that no religion howsoever historical, pure or revered, can permit or allow a person to commit death by choice. The fast until death is nothing but a self-destruction in whatever form and belief it may be, and that fundamental right to freedom of religion cannot protect a criminal act as it is subject to public order, morality and health.

No practice or belief or tenet, which is abhorrent to public order, morality and health and violates other provisions of the Part-III, namely, Article 21, can protect the religious practice.

The petitioner had further sought to impress upon the Court that Jain religion cannot claim a practice however ancient it may be, as an essential part or belief or tenet, which is violative of the public order and morality accepted by the State under the provisions of law including in section 309 IPC. The right to his/her death cannot be treated as part of the tenet of the religion, he had argued before the High Court.

The petitioner had also contended that though in Aruna Ramchandra Shanbaug V/s Union of India, the Supreme Court left the question as to whether not taking food consciously and voluntarily with the aim to end one's life is a crime, the substance of the judgments in Gian Kaur and Aruna Ramchandra Shanbaug is that no person has a right to take his own life consciously, as the right to life does not include the right to end the life voluntarily.

Accepting the contentions of the petitioner, the Rajasthan High Court observed that it was difficult to construe Article 21 to include within it the right to die' as a part of the fundamental right guaranteed therein. 'Right to life' is a natural right embodied in Article 21 but suicide is an unnatural termination or extinction of life and, therefore, incompatible and inconsistent with the concept of right to life’, the Court said. The Rajasthan HC also held that the Constitution does not permit nor include under Article 21 the right to take one's own life, nor can include the right to take life as an essential religious practice under Article 25 of the Constitution.

The Court further held that the argument that Santhara or Sallekhana is an essential religious practice of the Jain religion, has not been established.

This finding of the Rajasthan High Court which caused considerable unrest among those of the Jain persuasion, was also criticized in legal circles, including by eminent columnist and lawyer of the Madras High Court Suhrith Parthasarathy in an op-ed in “The Hindu”.

The leave petitioner has contended before the Supreme Court that the writ petition was filed by Nikhil Soni “on a total misconception and false notion of Sallekhana or Santhara conjured from inadequate/erroneous knowledge of a pious religious practice.” It has been averred in the special leave petition that “the practice of Sallekhana or Santhara, conceptually and actually is very distinct from “Suicide” and cannot at all be termed or equated with it so as to attract the provisions of either section 309 or section 306 of the Indian Penal Code.”

In fact the leave petitioner points out that the Rajasthan High Court has in the judgment committed a patent error of law in proceeding to decide the “issue” whether the practice of Santhara or Sallekhana constitutes an “essential religious practice” which according to the leave petitioner did not arise for consideration at all in the case.

It has also been submitted by the leave petitioner that the High Court without discussing the actual historical/ancient origin and object of Santhara/ Sallekhana and its religious importance as part of a basic element of Jainism i.e. “aparigriha” has proceeded to equate the same with the offence of suicide. The leave petitioners have placed reliance on the reported decision of the Apex Court in Commr. of Police v. Acharya Jagadishwarananda Avadhuta, (2004) 12 SCC 770 at page 782 to canvass for the proposition that the protection under Articles 25 and 26 of the Constitution is not confined to matters of doctrine or belief but extends to acts done in pursuance of religion and, therefore, contains a guarantee for rituals, observances, ceremonies and modes of worship which are essential or integral part of religion. According to the leave petitioners, in view of the philosophy and tenets of Jainism, Sanlekhana is essentially an embodiment of Tyaga – renunciation the basic theme underlying the Jain Religion and therefore it is an essential religious practice

The Supreme Court had held in the afore cited decision thus:

“9. The protection guaranteed under Articles 25 and 26 of the Constitution is not confined to matters of doctrine or belief but extends to acts done in pursuance of religion and, therefore, contains a guarantee for rituals, observances, ceremonies and modes of worship which are essential or integral part of religion. What constitutes an integral or essential part of religion has to be determined with reference to its doctrines, practices, tenets, historical background, etc. of the given religion. (See generally the Constitution Bench decisions in Commr., H.R.E. v. Sri LakshmindraThirthaSwamiar of Sri Shirur Mutt [AIR 1954 SC 282 : 1954 SCR 1005] , SardarSyednaTaherSaifuddinSaheb v. State of Bombay [AIR 1962 SC 853 : 1962 Supp (2) SCR 496] and Seshammalv. State of T.N. [(1972) 2 SCC 11 : AIR 1972 SC 1586] regarding those aspects that are to be looked into so as to determine whether a part or practice is essential or not.) What is meant by “an essential part or practices of a religion” is now the matter for elucidation. Essential part of a religion means the core beliefs upon which a religion is founded. Essential practice means those practices that are fundamental to follow a religious belief. It is upon the cornerstone of essential parts or practices that the superstructure of a religion is built, without which a religion will be no religion. Test to determine whether a part or practice is essential to a religion is to find out whether the nature of the religion will be changed without that part or practice. If the taking away of that part or practice could result in a fundamental change in the character of that religion or in its belief, then such part could be treated as an essential or integral part”

The leave petitioner has also pointed out that the Supreme court in Gian Kaur’s case while acknowledging that right to life does not include a right to die had clarified that the ‘right to life’ includes the right to live with human dignity which would mean the existence of such a right up to the end of natural life. “This also includes the right to a dignified life up to the point of death, including a dignified procedure of death. In other words, this may include the right of dying man to also die with dignity when his life is ebbing out. But the “right to die” with dignity at the end of life is not to be confused or equated with the “right to die” an unnatural death curtailing the natural span of life”

Relying on the above decision the leave petitioner contends that the process of sallekhana is part and parcel of the right to life with dignity and to live the duration of the life in the manner one chooses to individually. The same cannot be forced upon the in the matter in which others think it to be appropriate.