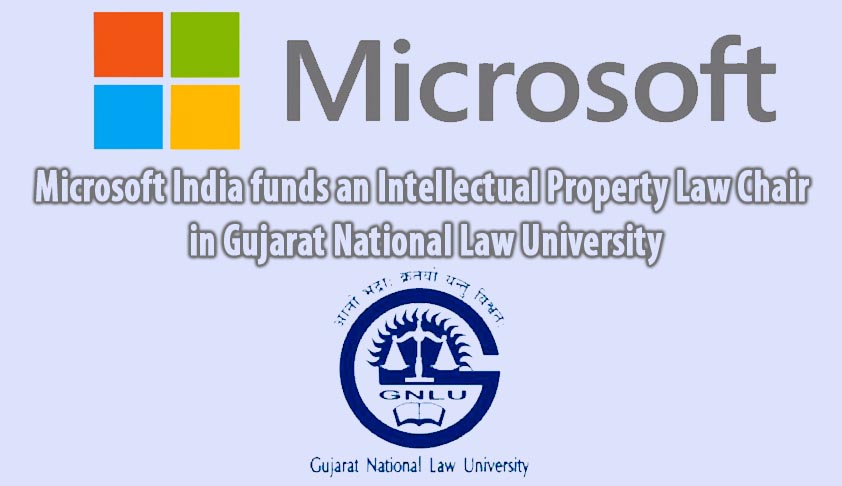 Gujarat National Law University (GNLU) is the chosen one for a first of its kind initiative in a National Law University by Microsoft India, the global computer giant.Microsofthas decided to set up a chair for intellectual property in GNLU to unleash research in the area by some of the brightest legal minds of the country.The big announcement came at a rather opportune moment,viz., at...

The big announcement came at a rather opportune moment,viz., at the ‘Seminar on Importance of IT Compliance in the Automobile Industry-Benefits of Strengthening your Supply Chain’, organized by Federation of Indian Chambers of Commerce & Industry (FICCI) in Ahmadabad in collaboration with GNLU. The seminar was attended by,amongst others, Vipin Aggarwal, Country Chair of The Business Software Alliance (BSA) India Committee and also the member company representative of Microsoft India. The conference dealt with the broad themes of compliance issues in the supply chain and the menace of using pirated software. The announcement of the chair being set up was done after the seminar. The chair would be headed by a team of three members,viz. Professor, Assistant Professor and a Research Associate.

Speaking to Live Law, Vipin Aggarwal, Country Chair of BSA India Committee and Director IPR of Microsoft India, said “As India’s continues its development into a knowledge economy, recognition of and respect for IP is critical. We are excited to set up a chair for Intellectual Property at Gujarat National Law University as we believe it will help drive significant amount of research in this area. The ultimate aim for this initiative is to foster research, academic collaboration and capacity building in Intellectual Property laws and policies.”

The Assistant Professor in Charge of this project at Gujarat National Law University, Hardik Parikh, who was also responsible for organizing the seminar which crystallized this event, also spoke to Live Law. According to him,” The main purpose of GNLU  Microsoft India Chair is the  creation and development of superior quality intellectual capital though research in the area of IPR Law and Policy for increasing awareness and respect for IPR and promotion of long term research and training collaboration between Microsoft  India and GNLU. The long term aim was capacity creation and development of policy research, education and awareness through a multidisciplinary approach in IPR.The short term aim being development of suitable academic research projects as agreed between Microsoft India and GNLU, providing a framework for analyzing the impact of IPR Law and policy on development and growth of Indian economy and the dissemination of knowledge and information on IPR law and policy through teaching and outreach programmes. Further announcements regarding detailed structure of programs, certificate courses, training sessions and research groups would be announced soon.”

Live Law spoke on this development to Keshav Dhakad, Regional Director - Intellectual Property, Microsoft Asia Pacific & Japan, who says"It is exciting to see Gujarat National Law University setting up the IP Chair for encouraging IP research and promoting interest in the subject of IPR among the faculty and students. With IP Rights becoming a key driver for innovation, creativity, entrepreneurship and business growth for India, focused academic research and studies in IPR will go a long way in strengthening the IPR Regime, increasing IPR awareness and appreciation and grow R&D funding in India. IP has always been central to Microsoft, and we are proud of being a partner in this collaboration with GNLU. I wish Microsoft India and GNLU teams all the best and success in this special endeavor"

This major breakthrough of GNLU is third in line with a fellowship of Khaitan on Mergers and Acquisitions and ONGC already being set up in the University.

Notably, in 2009, Indian Institute of Technology-Kharagpur (IIT-KGP), in association with Microsoft India, had set up Microsoft Centre of Excellence in Intellectual Property Research and Technology Policy (MSCIP). Situated within the Institute's Rajiv Gandhi School of Intellectual Property Law, the aim of the Centre was to enhance the school's attempt at equipping professionals from technological backgrounds in Intellectual Property (IP) law.This announcement underlines the fact that the National Law Universities have begun to follow in the footsteps of IITs and IIMs and are now being relied upon by global giants for think tank projects and policy work.