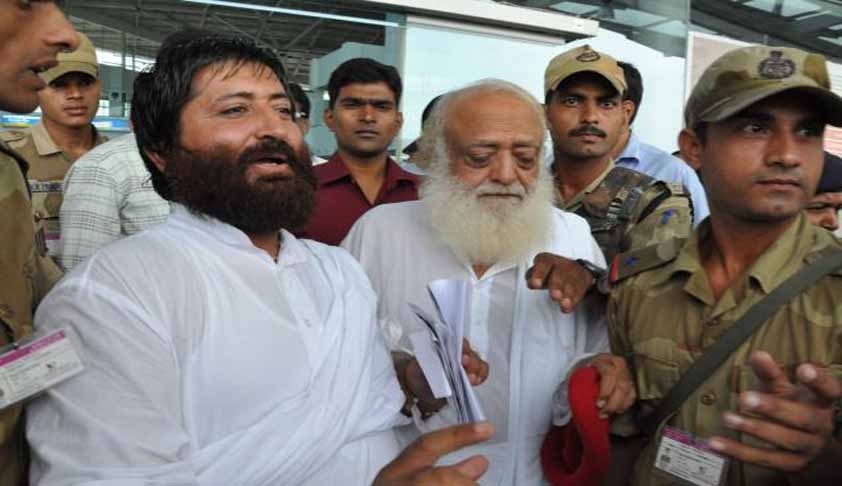 The investigation (by state police) therefore far from being credible does not inspire confidence, the Bench said.The Lucknow Bench of Allahabad High Court has transferred the case of missing witness in Asaram case to Central Bureau of Investigation. The Division Bench comprising of Justices Amreshwar Pratap Sahi and Vijay Laxmi, observed that investigation by the State police is far from...

The investigation (by state police) therefore far from being credible does not inspire confidence, the Bench said.

The Lucknow Bench of Allahabad High Court has transferred the case of missing witness in Asaram case to Central Bureau of Investigation. The Division Bench comprising of Justices Amreshwar Pratap Sahi and Vijay Laxmi, observed that investigation by the State police is far from being credible and does not inspire confidence

Dr. Rahul K. Sachan is one of the witness in trial against Asaram Bapu and his son Narayan Sai as well as other associates with regard to which criminal cases are going on in the State of Rajasthan at Jodhpur and in the State of Gujarat at Surat and Ahmedabad. Dr. Sachan went missing on November 25 last year.  Bennet Castelino, an overseas citizen and a lawyer had approached the High Court seeking a direction to the CBI) to investigate the case of the missing witness in the Asaram case.

The Court made scathing observations about the investigation by the state police. The Bench said: “The surprising part is that there is hardly any investigation or interrogation of the two Gunners, the Shadow/Gunner In-charge of the Police Lines or those connected with the security of the missing person in order to have a clue as to why they did not possess any information about his whereabouts after having left Lucknow on 25.11.2015. The case diary does not indicate any interrogation further worth the name from Constable Amit Kumar Singh who was in his security as a Gunner with Dr. Rahul K. Sachan on the date when he went missing. The Investigating Officer who was then conducting the investigation has maintained the case diary in a manner, which is not proper to be discussed at this stage, except for the fact that some documents were collected and a missing report was published in the newspapers on a ration card of Panchkula in Haryana and about the information at Delhi in Govind Ganj near Kalkaji Mandir, New Delhi where a visit appears to have been made but with no clue in the case diary at all. The subsequent Sub-Inspector who took over the investigation in April, 2016 his memos do not indicate any information worth the name or investigation having been conducted so as to inspire confidence. The sum and substance of the case diary that has been placed before the Court is that a paper formality appears to have been concluded in a crime of this nature.”

The Court further said: “it is not possible for us to gather as to the circumstances of the missing person conclusively, inasmuch as the missing person Dr. Rahul K. Sachan may have been quite possibly a victim keeping in view the nature of the crime or alternatively he could have gone underground voluntarily which is yet a matter of investigation, but the fact remains that the flaw in the investigation is clearly reflected while interrogating the Gunners and the security personnel who were provided as Guards for the person of Dr. Rahul K. Sachan. To proceed to investigate at Hardoi after six months remains unexplained. It is this surprising part which impels this Court to prima facie believe that the police has failed to carry out the investigation fairly and diligently. No effort worth the name has been made towards the possibility of involvement of the police itself that could have revealed something further. The investigation therefore far from being credible does not inspire confidence”

Transferring the case to CBI, the Court said: “the mysterious circumstances in which Dr. Rahul K. Sachan has gone missing and the slipshod manner of investigation therefore compel us not to believe the hope expressed for some better investigation by the State which has come too late in the day as indicated above. We, therefore, decline the request of the learned Additional Advocate General to get the investigation carried out by the Special Investigation Team (SIT). Consequently, we direct the Central Bureau of Investigation (CBI) to take over the investigation of Case Crime No.1071 of 2015 under Section 364 IPC, P.S. Thakurganj, District Lucknow forthwith.”

In another related development, Supreme Court yesterday directed the Rajasthan government to bring self-styed godman Asaram Bapu facing rape charges to AIIMS by air from jodhpur jail for medical check ups as he claimed to be suffering from several chronic ailments.