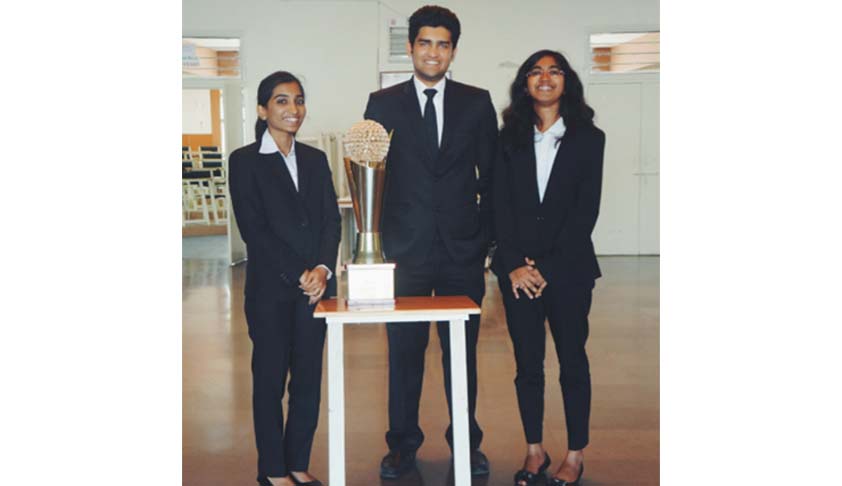 The competition was held at NUJS Kolkata from the 6th to the 8th of March, 2015.

About the Competition: HSF is a Corporate law moot. The problem incorporated several corporate and contract principles not only pertaining to Indian jurisprudence, but also had a substantial international law element. Only invited teams were permitted to participate in the Moot. This time round, a different method of tabulation that involved round points instead of the usual method of cumulative scores and memo scoring was adopted which naturally made the competition way more challenging.

The Problem was drafted by Mr. Umakanth Varrotil, Professor National University of Singapore.

This is in fact the second time in four years that NLIU Bhopal has won the Herbert Smith competition.

Live Law: Congratulations for this achievement. How do you feel?

Team: This has been a very humbling journey for us. Obviously the feeling of winning such a prestigious moot didn’t sink in that easily. We were extremely glad that all our hard work and efforts paid off and we also feel very grateful towards our University and our seniors, without whose support and guidance, this journey would have been much harder.

Live Law: Two of the team members are from the second year,what made you opt for a Moot Court Competition of this Stature?

Team:Our University operates on a Moot Pool basis and based on our effective ranks, we are allowed to pick up national and international moots. For us, the opportunity to pick up the Herbert Smith Moot was too precious to let go. We did have our apprehensions initially,considering that Company Law was new to us since we are not taught this subject until the third year in our University. This added to the pressure of doing such a prestigious moot. However, it was an appealing challenge for us and we are glad that it fructified.

Live Law: What was the Plan? Did it execute well or were there any changes?

Team: While picking up the moot we did realize that we had to invest a lot of time and effort. One of the reasons why the process became more gruelling was the fact that we had a one-month break and did not have any access to our library resources. This meant that we had to put in 200% once we got back to college. While it may be hard to believe, the fact is that we didn’t operate on a long-term plan. Instead, considering the paucity of time, our work was very deadline-specific. This naturally meant that we had to streamline and prioritize our preparation.

Live Law: National Law Institute University over the years has performed exceptionally well in this Moot Court Competition. Any specific reasons for the same? You guys must be under a lot of pressure to match up to the expectations, weren’t you?

Team: Well, that’s a question our seniors should answer! In our university, all the teams which have previously done a particular moot take up the responsibility of guiding and coaching the current teams in whatever way possible. We didn’t really need to go and ask for help since everyone was more than willing to help us out, whether with proof-readingour memorials or with taking mock oral rounds. Apart from that , it is true that our seniors had set a precedent that was hard to match up to.

Live Law: Please throw some light on the Moot Problem?

Team:While the core of the problem was Corporate Law, it also had several International Law elements. More importantly, it was a very practical problem. The nitty-gritties of the problem made it all the more challenging to argue out, considering that both sides had their fair share of strong points and loopholes. Through the preparation process and even during the moot, we got to explore all possible facets of the problem and we thoroughly enjoyed the experience.

Live Law: What is the ‘Mantra’ of a Winning team?What does it taketo be a winning team?

Team:We don’t really think there is one specific ‘Mantra’ and it is also hard to single out one particular factor that worked for us. But overall, mooting is all about hard work, team coordination and striking a balance between being well-rehearsed and being able to think on your feet.

Live Law: How were the finals?

Team:We must confess that we had our University exams scheduled the next morning, which we had to attend at any cost. And believe us when we say that all the last minute cancellation of tickets and rescheduling of travel plans happening during the finals. In was truly a balancing act for us. We didn’t have much time to prepare for the finals. In our opinion, it was an extremely well-matched round. Moreover, we felt really privileged to be able to argue out our case beforea distinguished panel, with the likes of Partners of Herbert Smith Freehills, London, a Professor from the University of Oxford, Partner of Khaitan& Co., and Judges of the Calcutta High Court. The pertinent questions that they posed reflected their years of experience. At the same time, this was very unnerving and the pressure of performing well was very high.

Live Law: How was this Competition? Who all were your Opponents?

Team:The competition truly lived up to its name and was extremely competitive. Since it was an invited moot, it naturally meant that all the participating teams were very well-prepared and the teams had to win the maximum round points in both preliminary rounds to qualify for the post-break rounds.The moot was testing ground of one’s tenacity, more than even preparedness. We went up against Christ Law College, Symbiosis Law School Pune, HNLU Raipur, ILS Pune and lastly, NLSIU Bangalore.

Live Law: According to you guys, who was the toughest opponent?

Team: We genuinely feel that the semi-final against ILS Pune was the closest call for us. We were pleasantly surprised when we got to know that we had cleared to the finals, despite the fact that we had to make new travel arrangements, which equally unsettled us.

Live Law: At what point of the Competition did you guys realise that you can win it?

Team:Frankly, we got to know that we had won the competition while buying tickets off the shelf at the Calcutta airport and genuinely did not expect this outcome.We took each round as it came. But we will not deny the fact that we remained optimistic throughout the competition and did not let the gruelling rounds wear us down.

Live Law: Please give some mooting advice to all the readers out there.

Team:Well, mooting can be made fun and is not as pathetic as it is made to seem like! One should make sure that enough attention is given to the fact sheet as that is the most important document for any mooter. One just needs to pick the right moots and enjoy the process of studying the law involved, in fact, the challenge lies in making it enjoyable. Each moot is a learning experience and we can assure you that one takes back plenty, regardless of the outcome of the competition.

Thank you team, for your time, we wish you all the best of health and happiness for your future.