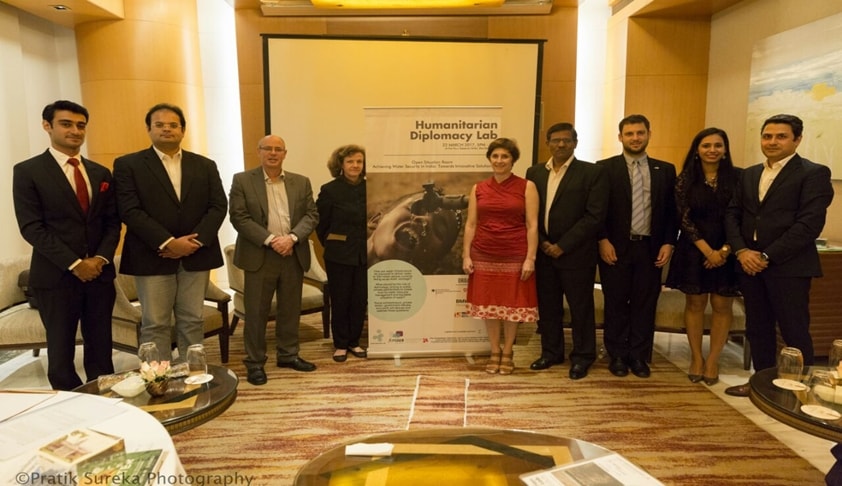 On World Water Day, the Open Situation Room (OSR) on ‘Achieving Water Security: Towards Innovative Solutions’ was held at the Four Seasons Hotel, in Mumbai.The event was part of the Humanitarian Diplomacy Lab- an international initiative  of  the Global Diplomacy Lab,  a collaboration of the Federal Foreign Office in partnership with the BMW Foundation Herbert Quandt, the Bosch...

The event was part of the Humanitarian Diplomacy Lab- an international initiative  of  the Global Diplomacy Lab,  a collaboration of the Federal Foreign Office in partnership with the BMW Foundation Herbert Quandt, the Bosch Alumni Network, the Stiftung Mercator and the Global Leadership Academy of GIZ; the Swiss consulate of San Francisco, and, swissnex of Switzerland’s  State Secretariat for Education, Research and Innovation centre.  Such OSRs were held in seven cities across the globe including Kathmandu, Bogota, Montreal, Geneva, San Francisco, and, Accra. Each OSR addressed an important humanitarian challenge facing the region, and sought to underline the vast potential for creative, political cooperation to solve difficult global challenges.

This is for the first time that the OSR has been brought to India. The OSR is a new and innovative format of discussing and finding solutions to pressing global governance challenges used by the Global Diplomacy Lab. The Global Diplomacy Lab (GDL) is a platform for exploring a new and more inclusive diplomacy that goes beyond traditional politics. Creative professionals from various fields are thus needed to explore new tools of communication on the basis of mutual trust and to re-formulate an agenda for collective action. The OSR is a hackathon in a startup style focused on creating synergies between the skill sets of people from a wide variety of backgrounds, such as, diplomats, NGOs, entrepreneurs, private sector, journalists, youth, etc. A situation room is a place where government officials gather in times of crisis to collect information and coordinate activities.

In Mumbai, Ms. Jasdeep Randhawa, a fellow of the Global Diplomacy Lab, and, a BMW World Responsible Leader, with extensive international development experience in water security, was the local champion for holding the OSR. The event was held in partnership with the German, Israel, and, Swiss Consulates of Mumbai, and, the BMW Foundation India Chapter, represented by the Chapter Head, Mr. Rahul Chawla. Mr. Rasesh Seth, the Chief Operating Officer of Vestyn Partners, provided logistics and moderation support for the event.

Ms. Randhawa welcomed the audience, who quoting the Late Professor John Briscoe, emphasized the need for developing unorthodox ideas during the OSR for better water management in a country where water is not taken for granted, and, where farmers and women face suffer extensive hardship because of water insecurity.

Thereafter, Ms. Gabriele Boner, the Deputy Consul General of the German Consulate in Mumbai gave the introduction speech. Ms. Boner stressed the critical role of diplomacy and the OSR in resolving the ongoing water crisis, as water disputes were both inter-state and transboundary in nature. Ms. Boner drew the attention of the audience to rapid urbanization, changing demographics, lack of access to clean water and sanitation access both in the region and India, to emphasize the need for improved water resource management techniques.  Simultaneously, with the adoption of the Sustainable Development Goals (SDGs) on access to clean water and its international recognition as a human right, Ms. Boner also emphasized the need to leverage opportunities to achieve water security, provided by the Smart Cities initiative, investment in water infrastructure, and, ratification of the UNFCCC agreement by India.

Mr. David Akov, the Consul General at the Consulate General of Israel in Mumbai, who was also the Challenge Holder for the OSR, next addressed the audience. He spoke of the interlinkages between the water and refugee crisis unfolding in countries such as Syria, and ongoing migration as a direct effect of drought.  Mr. Akov stressed the need for water resource management, and for finding innovative solutions including technological, to avert water conflicts that were increasingly becoming political.

Mr. Dirk Walther, the Project Director of ‘Support to National Urban Sanitation on Policy’, GIZ, emphasized the need for reduced urban water footprint in India, and spoke of the nexus between water scarcity and urban sanitation.  He gave examples of GIZ projects from Kerala, Maharashtra, Uttarakhand and Telengana,  to stress on the need to improve infrastructure and strategically plan ownership of assets, to improve urban  sanitation and achieve sustainable urban development.   Mr. Walther also suggested solutions based on projects and his experience by storing rain water for flushing, and, separation of solids from liquids as was the case of Germany for managing ground water.

Mr. Suresh Kulkarni, the Secretary from the Maharashtra Water Resource Regulatory Authority provided a holistic overview of the water resources in Maharashtra, emphasizing that if the current business as usual state continued, then by 2030, there would be a shortage of 25 BCM of water.  He gave an overview of the policy, institutional, and administrative reforms in water in Maharashtra.  Mr. Kulkarni also suggested solutions based on participatory irrigation management; volumetric water supply and charging; water saving irrigation methods; and, water reuse in industries.    He highlighted some of the most pressing challenges facing the state and the need for innovative solutions, particularly those relating to revitalizing Water User Associations;  appropriate  pricing of water; Implementation of the Groundwater Act; use of ICT for information acquisition and data collection;  improving performance of  large-scale state sector irrigation schemes; and, use of integrated approach to address climate change.

Mr. Nimrod Assouline, Deputy Chief of Mission, Israel Consulate in Mumbai, presented the case of Israel which from a water scarce nation had with the creation of the National Water Carrier been able to successfully divert large amounts of water. Mr. Assouline presented three solutions for the case of India based on the Israel experience- technology, government, and public awareness through use of social media. He also spoke of the Israel-India partnership in collectively addressing the water scarcity problem.

Mr. Adi Bhujle, the Indian Representative of the German Water Partnership, presented on the technology used by GWP in India for water and wastewater management. He provided examples of both a small scale (domestic waste water reuse) and a large scale (city level) usage of these technologies.

Mr. David Akov then delivered the challenge statement. He proposed that the groups find solutions to water pricing in India, and the role of public-private partnerships, regulatory bodies, and the state in water management.  The groups consisted of CEOs of water companies; youth; social entrepreneurs working in the space of sustainability, climate change, water; ICT experts; journalists; doctors; law students; architects; lawyers; and, economists.

The three pitches consisted of ideas relating to– 1. Telescopic billing for tariffs, and, improving quality of water; 2. Differential pricing for different water users and demands; and, 3. Differential pricing for industrial establishments, with use of social media and women as the ambassadors to build awareness on wastage and access to clean and safe drinking water.