Nameless - Faceless, But Not Voiceless Anymore. A Book Review 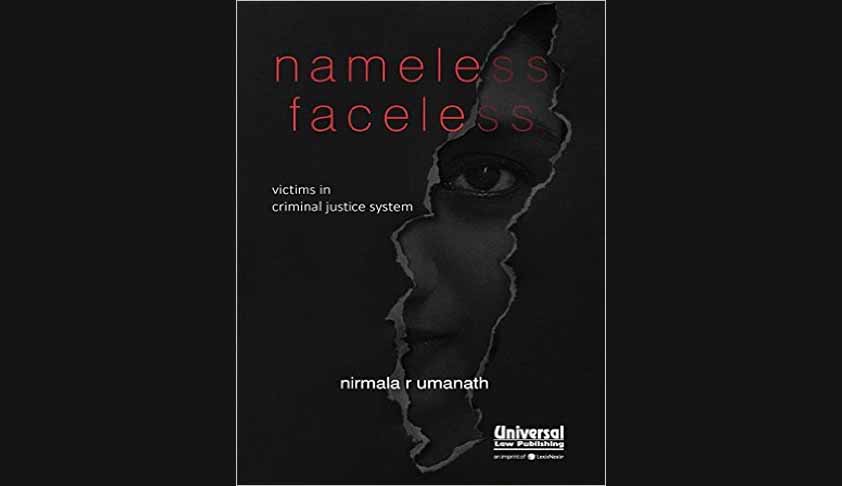 I had the privilege to recently review the heart melting book by Neelam and Shekhar Krishnamoorthy on the Uphaar Cinema tragedy.The role of victims (both first hand and second hand i.e. guardians) in our criminal administration system is very limited and in mostly non effective. Except the definition in Section 2(wa), assistance to the Public Prosecutor under Section 301, right to appeal and the victim compensation scheme, the participation of a victim is full of various day to day troubles, harassments and discouragements. Victims, for achieving justice have to strive very hard and go through a journey of immense pain to even attempt effective justice. ‘Nameless, faceless : victims in criminal justice system’ authored by Nirmala R Umanath (published by Universal Law Publishing; an imprint of LexisNexis) samples out women victims of sexual offences in Tamil Nadu and narrates horrific incidents of brutal torture, firstly by the accused and secondly at the hands of law enforcement agencies and thirdly by judiciary. The book runs into 276 pages divided into 8 chapters. The title of the book is perhaps borrowed from the classic case of Payne v Tennessee (1991 US) where the famous statement “the crime victims are not nameless/faceless non-players in criminal justice system” was written. Author is an advocate and a leading member of All India Democratic Women’s Association (AIDWA) and was offered judgeship by Justice R.K.Agrawal when he was the Chief Justice at the Madras High Court.

Before detailing about the book, the reader must keep in mind, the victim in the book throughout is a ‘she’, the crime is an offence against human body including mostly rapes and the place of occurrence except the Nirbhaya case, Mathura gang rape case, Katara murder (where the girl denied any romantic attachment with the deceased lover), Suryanelli rape and Bhanwari Devi (where the trial court held that higher caste men would not rape lower caste men) is Tamil Nadu. The endeavour of the author is to sample out first hand incidents and narrate them in a way which stirs the human soul. It was much easier for me to correlate with the names of places and people as I had the privilege of staying in Tamil Nadu for over a year but it will be difficult for people not habitual with the places and castes as the territorial area and the supremacy of certain castes in those areas helps in understanding how it affects criminal justice administration.

The author has orchestrated the scheme of the book by first criticizing the Blackstone ratio that says it is better that ten guilty persons escape than one innocent suffer and then comparatively lists the rights of accused vis a vis the rights of a victim. Chapter 4 is the heart and soul of the book, wherein the author has narrated in a very elegant manner how victims suffered, how they were tortured by the very same people whom the state has authorized and deputed for their safety, how they received help, how they were discouraged and how they fought extremely hard. Among so many incidents which I do not discuss here igniting the enthusiasm to read the book, there is one particular incident which touched me where Justice Banumathi (Supreme Court), when she was an additional Sessions Judge was appointed as a judicial commission to probe into an incident had to go a long distance and then walk by foot for 2 km to reach the village. The incident shows deep zealousness for justice by Justice Banumathi and that the author has sampled out incidents from such remote areas. The author has also narrated how she wanted to get hold of a false spiritual guru Premananda but could not do so resulting into much more incidents of sexual assaults within next 6 years when he was finally caught and prosecuted. The book also records international instruments on rights of victims and rights granted in other jurisdictions.

The author in her zeal for helping victims had to face a false case under SC/ST Atrocities Act and her offer to judgeship had to succumb to influential leg pulling. Nevertheless, she managed to fight it all out and strive towards achieving justice. The author is a role model for victim rights in India. The book is a must read for professionals, students of victimology and academicians. Let us remember what Marx wrote – “victims of the world unite; you have nothing to lose except your fears”. Till the time we have people like the author and books of such pin pointing nature, the names and the faces may be forgotten but the voice of victims will never fade away.Kudos to the author and to the book!