New Roster In SC: CJI Misra To Hear All PILs 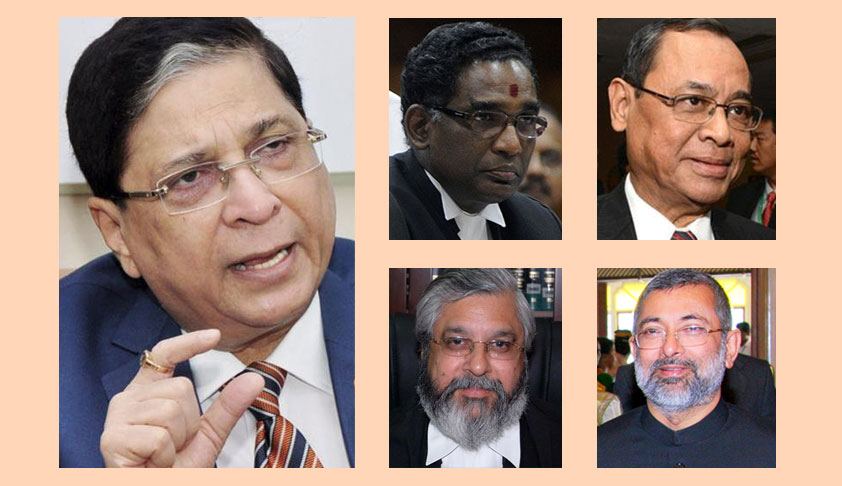 In what seems like an effort to address the grievances raised by four Supreme Court Judges in their press conference, Chief Justice of India Dipak Misra has introduced a subject-wise roster system in the Supreme Court.The Roster, which will come into effect from 5 February, endows CJI Misra with the responsibility to hear all Letter Petitions and PIL matters, along with matters relating...

In what seems like an effort to address the grievances raised by four Supreme Court Judges in their press conference, Chief Justice of India Dipak Misra has introduced a subject-wise roster system in the Supreme Court.

The Roster, which will come into effect from 5 February, endows CJI Misra with the responsibility to hear all Letter Petitions and PIL matters, along with matters relating to service, election, arbitration, habeas corpus, criminal, contempt of court, appointments of constitutional functionaries, statutory appointments and commissions of enquiry.

Justice J. Chelameswar, who has been the rebel within the collegium for a while now, will be hearing matters relating to labor law, indirect tax, land acquisition and requisition, compensation, simple money and mortgage, Court employees, eviction, land laws, admiralty and maritime laws, and consumer protection.

The four Judges- Justice Chelameswar, Justice Gogoi, Justice Lokur and Justice Joseph- had held the press conference asserting that the administration of the Apex Court is "not in order" and that many "things less than desirable" have been happening in the last few months. It was further revealed that the four Judges had written a letter to the Chief Justice of India Dipak Misra two months ago, airing their grievances.

The primary concern raised in the letter pertained to assignment of matters. While acknowledging that the CJI is the master of the roster, the letter said that this is "not a recognition of any superior authority, legal or factual of the Chief Justice over his colleagues". It then stated that while there are well-settled conventions guiding the Chief Justice in the task, off late such conventions have not been strictly adhered to.

"There have been instances where case having far-reaching consequences for the Nation and the institution had been assigned by the Chief Justice of this Court selectively to the benches "of their preference" without any rationale basis for such assignment. This must be guarded against at all costs.

We are not mentioning details only to avoid embarrassing the institution but note that such departure have already damaged the image of this institution to some extent," the letter had said.

Their grievances were, soon after, supported by the Campaign for Judicial Accountability and Reforms (CJAR), which acknowledged that while the four Judges didn't say it, the assignment of such cases to certain junior Judges was, in fact, done "for achieving a particular result, which in most cases can be seen to be in tune with the wishes of the government". Such attitude, it said, is especially dangerous when the Government is "trampling on peoples’ fundamental rights and constitutional values".

It, in fact, claimed that there are numerous such instances of "abuse of the power of the master of roster" and went on to list down such instances. The list began with the decision on the dismissal of its Petition demanding an independent probe into allegations of corruption in the higher judiciary in the medical college bribery case. It, inter alia, also mentioned such roster changes made in the Petition challenging appointment of Special Director, CBI and in another Petition seeking an independent probe into the death of special CBI Judge B.H. Loya, who was hearing the Sohrabuddin Sheikh encounter case.

However, this did not bring about any change in composition of the Constitution Bench that commenced hearing from 17 January. The Bench comprising Chief Justice of India Dipak Misra, Justice A.K. Sikri, Justice A.M. Khanwilkar, Justice D.Y. Chandrachud and Justice Ashok Bhushan has been hearing eight important cases referred to it.

These include petitions relating to the constitutionality of Aadhaar, entry of women in Sabarimala and change of religious identity of Parsi woman. It will also reconsider earlier judgments which had upheld IPC sections penalizing adultery and homosexuality. You may read more about the cases here.

Read the Roster from Feb 5