A Robust ODR Ecosystem in India Will Have A Potential of Reducing The Load on Courts : NITI Ayog CEO Amitabh Kant 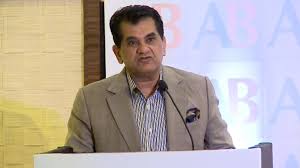 Mr. Amitabh Kant commenced the address by stating that India was at the cusp of transformative change.

"India is at a cusp of transformative change with use of Technology in the Judicial System and our Supreme Court is leading us in innovative ways. Government is committed to strengthening the Alternative Dispute Resolution System and Online Dispute Resolution so that it can lessen the burden on our Courts so that they can focus on more complex cases."

Mr. Kant emphasized on how the COVID-19 pandemic had completely altered the functioning of court proceedings, and that one of the most progressive developments had been the adoption of technology by the Supreme Court.

"Chief Justice of India SA Bobde has highlighted that use of Artificial Intelligence in Judicial Domain will enhance the efficiency of Courts in non-decision-making aspects. Justice DY Chandrachud has introduced eFiling in our Courts under eCourts Project and this will revolutionise the judicial functioning and is a game changer."

Referring to a recent closed-door meeting on Online Dispute Resolution with Justice Chandrachud, Justice Sanjay Kishan Kaul, Justice Indu Malhotra, and retired Justice AK Sikri, Mr. Kant stated that the conclusion on ODR's potential was positive. Further, they had also benefitted from the contribution of Mr. Nandan Nilekani, Mr. Colin Rule, and representatives from the legal fraternity, the government and from the industry during the meeting.

"Through a combination of several factors, we are at a cusp of transformative change, and with alterations necessitated by the pandemic, technology will play a key role in widening equity and affordability."

Mr. Kant asserted that the pandemic had iterated the crucial role of technology in allowing remote contactless support to daily work roles, flagging its importance to a flat and affordable form of access to justice. In that context, in today's age of data-driven solutions and machine learning, ODR was much more than just replicating the existing processes of ADR online.

"This is because technology can aid the resolution of disputes by providing analytic insights for the benefit of dispute resolution. Even before the COVID crisi, there was a growing recognition of the fact that in a country as large and fast-growing as ours, it was essential to resolve a large number of disputes collaboratively outside of courts to sustain trust between the parties."

Therefore, while the Courts were being digitized and made much more efficient, there remains a need for collaborative mechanisms of resolution that do not require parties to approach the court. In other words, most small and medium value disputes could be resolved without having to approach courts, thereby allowing the Courts to focus on complex cases or those with high public interest.

"A collaborative mechanism of ODR provides this potential to resolve a substantial percentage of disputes at the site of their occurrence without burdening the courts. Progressive and disruptive changes in justice delivery are critical components now that can alter the course of access to justice in an unprecedented way. Each arm of the Indian system must and is working towards a solution driven future, and that is where the change will be visible."

Mr. Kant emphasised the possibility of a deluge of cases in the coming months, notably in lending, credit, property, commerce and retail, which would require expedient resolution. For this reason, new innovation models such as ODR need explicit support.

"Support now, would encourage businesses to build ODR mechanisms into their partner and customer relationships. Banks, NBFCs and MFIs could then prioritize ODR before they approach debt recovery tribunals. Families would take recourse to ODR to address sensitive issues, and so on. Hence, with ODR, a "mechanism of justice" would be made accessible, affordable and easily available for citizens".

Referring to the example of COVID-19 ODR Scheme initiated by the Hong Kong Government on April 8th, Mr. Kant underlined the potential of a robust ODR ecosystem in India:

" i. Reducing the load on courts by resolving high volume of disputes outside the courts

iii. Increasing trust in businesses and also within society by prioritizing collaborative resolution.
iv. It is vital that key stakeholders come together to see what steps can be taken to remove the barriers to scalable ODR solutions."

The result of a robust ODR System could be a range of creative, technology-driven and ADR inspired solutions that could significantly lower the load on the Courts. On that note, Mr. Kant concluded his address by stating that they would look closely into ODR in the coming months and will work with key stakeholders to help enable it as a viable and sustainable form of dispute avoidance and dispute resolution.

IDRC was established by the Indian Dispute Resolution Council as a Not-for-Profit Organization with its own progressive ADR Rules. It is India's first of its kind institutional ADR Centre which provides offline as well as eADR facility through its state of the art eArbitration, eMediation and eConciliation Software Portal.