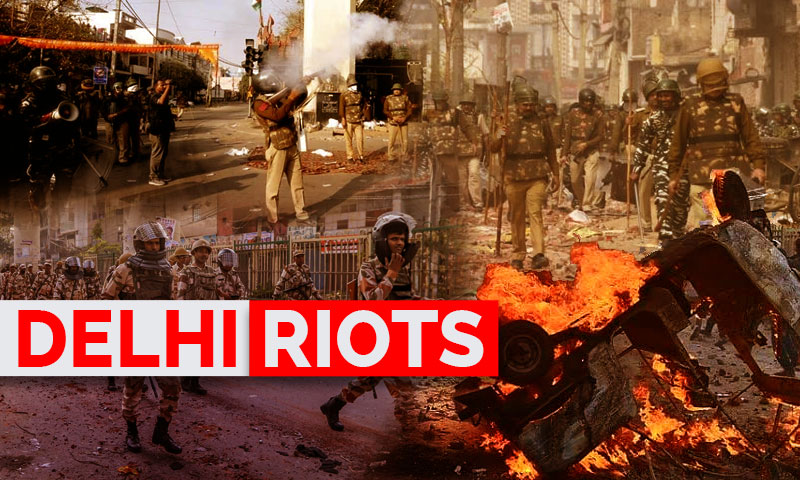 Additional Sessions Judge Vinod Yadav, one of the judges dealing with Delhi Riots cases, has now been transferred to Rouse Avenue Court, as a Special CBI Judge.He has been transferred from the charge of Additional Sessions Judge of Karkardooma Court, North East Delhi. It was yesterday that the Delhi High Court issued the transfer orders for ASJ Yadav, along with 10 other judicial...

Additional Sessions Judge Vinod Yadav, one of the judges dealing with Delhi Riots cases, has now been transferred to Rouse Avenue Court, as a Special CBI Judge.

He has been transferred from the charge of Additional Sessions Judge of Karkardooma Court, North East Delhi. It was yesterday that the Delhi High Court issued the transfer orders for ASJ Yadav, along with 10 other judicial officers.

While dealing with the Delhi riots cases, ASJ Yadav has made several damning observations against the Delhi police, highlighting the lacunae and anomalies in the investigation.

Here are some of the notable observations :

Observing that the investigation was done in a farcical and casual manner, ASJ Vhnod Yadav had imposed a cost of Rs. 25,000 on Delhi Police while dismissing a revision plea filed by them challenging an order directing them to register a separate FIR of one Mohd. Nasir who had received injuries in the North East Delhi riots.

Pulling up the Delhi Police for its conduct, he had observed that the SHO Bhajanpura and other supervising officers have miserably failed in performing their statutory duties.

"The mandate of the Delhi High Court Rules, referred to by the learned counsel for the respondent has not been followed by either the police or by learned Illaka MM in the matter, which clearly goes on to establish that the investigation even in case FIR No.64/2020, PS Bhajanpura has been done in a most casual, callous and farcical manner," the Court said.

2. "Sorry State Of Affairs": Court Expresses Dismay Over Police Witness Lying On Oath About Identification Of Accused In Riots Case

Terming it to be a sorry state of affairs, ASJ Yadav had expressed dismay over the action of a police witness lying on oath regarding identification of three accused persons in a case concerning the North East Delhi riots.

The judge, who sought a status report to be filed by DCP, North East in this regard, said thus:

"Prima facie, one of the police witnesses is lying on oath punishable u/s 193 IPC."

"It is brought to my notice by the Ld. Defence Counsel that FIR bearing no.134/21, PS Gokalpuri has been registered in the matter on the complaint of Sh.Nisar Ahmed in which aforesaid three persons have been specifically named as accused persons but even in that case, the said accused persons have not been interrogated. This is a very sorry state of affairs."

3. "Sorry State Of Affairs": Court Expresses Displeasure At Delhi Police Over No Progress In Investigating A Riots Case

Calling it as a 'sorry state of affairs', the judge had expressed its displeasure at the Delhi Police over no progress in investigating a riots case and non interrogation of persons named in FIR 134/2020 registered at Gokulpuri Police Station.

"This is really a sorry state of affairs. It is being claimed by the police in other cases of riots that the circumstances prevailing during the period of riots and almost four weeks thereafter were really difficult and the police could not investigate the cases properly. Thereafter, Delhi was engulfed in Corona virus pandemic and as such, the quality investigation in the matter could not take place," he said.

"I wonder whether the police can take the same excuse qua the investigation of case FIR No.134/2021, PS Gokalpuri. The answer has to be "clear No," it added.

"When history will look back at the worst communal riots since partition in Delhi, it is the failure of investigating agency to conduct proper investigation by using latest scientific methods, will surely torment the sentinels of democracy," observed ASJ Vinod Yadav on Thursday while discharging three accused persons in a Delhi Riots case.

Pulling up the investigating agency, he observed that the case appeared to have been solved merely by filing this charge sheet "without any real effort being made to trace out eye witnesses, real accused persons and technical evidence" in the matter.

While framing charges against one Rohit in a case concerning North East Delhi riots, ASJ Yadav observed that even though the investigation in the matter appears to be highly callous and inefficient, however, the statements of victims cannot be ignored by the Court.

"Be that as it may, it is worth noting that investigation in the matter appears to be highly callous, inefficient and unproductive; however, as noted earlier this Court at this stage, cannot ignore the statements of victims dehors the delay in recording of FIR in the matter," he observed.

6. "Painful To Note That Standard Of Investigation Is Very Poor In Large Number Of Riots Cases": Delhi Court Pulls Up Police, Calls For Remedial Action

The judge had pulled up the Delhi Police for the manner of investigating cases concerning the North East Delhi riots including half baked filing of chargesheets and non appearance of Investigating Officers before Court.

He also called for immediate remedial action and asked the DCP of North East District and other senior officials to take notice of the situation.

"It is further painful to note that in a large number of cases of riots, the standard of investigation is very poor. After filing of chargesheet in the Court, neither the IO nor the SHO nor the aforesaid supervising officers bother to see as to what other material is required to be collected from the appropriate authority in the matters and what steps are required to be taken to take the investigation to a logical end."

"It is noticed that after filing the half-baked chargesheets in Court, the police hardly bothers about taking the investigation to a logical end. The accused persons,who have been roped in multiple cases continue to languish in jails as a consequence thereof."

Forming a prima facie opinion that there was negligence on part of the investigating agency, the judge had pulled up the Delhi Police for its "lackadaisical attitude" for not being aware that a separate FIR was already registered in relation to the Madina Masjid vandalism case.

Allowing the revision petition filed by the Delhi Police, he had sent back the matter to the ACMM Court in order to apply it's mind in a holistic manner in view of the disclosure of a separate FIR.

The matter pertained to one Hashim Ali, who was subsequently made an accused by the police after tagging his complaint with another FIR alleging theft, destruction of property and arson.

8. Delhi Court Casts Serious Doubt On Credibility Of Police Witnesses, Grants Bail To One On Ground Of Parity

While granting bail to one Amit Goswami in relation to the north east Delhi riots on the ground of parity, the judge had casted "serious doubt" on the credibility of police witnesses in the case.

The judge granted relief to Amit Goswami on furnishing a bond of Rs. 20,000 with one surety of like amount in the case of vandalizing, looting and putting on fire a shop in Bhajanpura main market area by allegedly being a part of a "riotous mob" on 25th February 2020.

"Being police officials, what stopped them from reporting the matter then and there in the PS or to bring the same in the knowledge of higher police officers. Even no PCR call was made by the said witnesses on the date of incident. This casts a serious doubt on the credibility of said police witnesses," he observed at the outset.

The judge also expressed his surprise over the non maintenance of investigation file especially the case diaries and witnesses statements recorded probably after the last date of hearing in relation to the alleged burning of the Madina Masjid during the north-east Delhi riots that broke in February last year.

He asked the police to file a status report in the matter and bring the original record (daily diaries) of the complaint related to Madina Masjid burning before the Court on the next date of hearing i.e. 7th April 2021.

10. Delhi Riots Cases To Be Considered With Sensitivity That Doesn't Mean Common Sense Should Be Given Go-By: Delhi Court

The judge had also observed that while it is conscious of the fact that communal riots cases have to be considered with utmost sensitivity, however, the same does not mean that common sense should be given a complete go by.

He also added that mind has to be applied at the stage of framing of charges with regards to the material available on record.

He discharged 22-year-old Javed under sec. 436 IPC (mischief by fire or explosive substance with intent to destroy house etc) after taking note of the fact that there was not a single word in the statements of complainants showing that the riotous mob had committed mischief by fire during the riots.

Observing that it is prima facie apparent that AAP leader Tahir Hussain used his muscle power and political clout to act as a kingpin in planning, instigating and fanning the flames of communal conflagration, the judge had dismissed his bail applications in two Delhi Riots cases.

He denied the bail to Hussain in two FIRs in relation to information received by Sushrat Trauma Centre in relation to gunshot injuries sustained by Ajay Kumar Jha and Prince Bansal.

"The spread of riots on such a big scale in such a short time is not possible without a premeditated conspiracy. So, now when the applicant found himself up against the wall, he cannot pass on the buck by simply taking a plea that since he did not participate physically in the riots, so he has no role to play in the riots. It is prima facie apparent that the applicant abused his muscle power and political clout to foment communal violence in the area." He observed while denying bail to Hussain.