Assam NRC- Citizen Can't Be Declared Foreigner Just Because Linkage Is Not Shown With All Relatives : Gauhati High Court 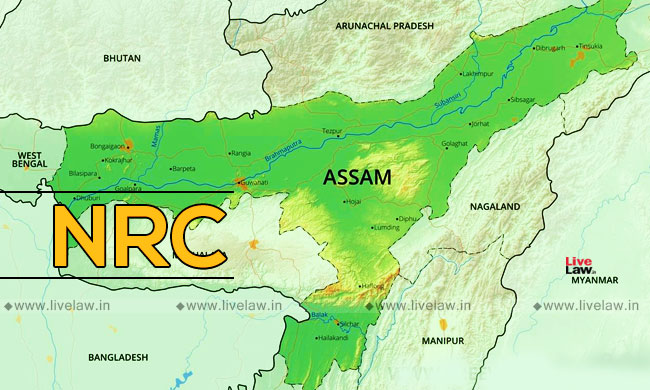 x
A person who has proved linkage with parents/grandparents, whose names are in voters lists, can't be declared a foreigner just because he did not show linkage with all relatives.

In an astonishing order, a Foreigners Tribunal in Assam had declared a man named Haidar Ali as a foreigner although he had established the link with the names of his father and grandfather entered in the voters lists of 1965 and 1970.The Tribunal at Barpeta observed that since Haider Ali had failed to establish his linkage with other projected relatives in the voters list. Therefore, the...

In an astonishing order, a Foreigners Tribunal in Assam had declared a man named Haidar Ali as a foreigner although he had established the link with the names of his father and grandfather entered in the voters lists of 1965 and 1970.

The Tribunal at Barpeta observed that since Haider Ali had failed to establish his linkage with other projected relatives in the voters list. Therefore, the Tribunal held that he had failed to show the linkage properly.

This order of the Tribunal was set-aside by the Guahati High Court observing that it was not necessary for the person to show linkage with all relatives mentioned in the voters list.

"What is important to note is that the "fact in issue" before the Tribunal was, whether the petitioner was the son of Harmuz Ali and in turn, was the grandson of Nadu Miya, the father of Harmuz Ali, and whether the petitioner could trace his ancestry to the said Nadu Miya through Harmuz Ali, as Nadu Miya was admittedly an Indian who had been casting his vote since 1966. As such, the fact in issue was not whether the petitioner had other relatives also.Thus, non-mentioning of his other relatives as well as that of his father cannot be a ground for disbelieving his testimony and the documents relied upon by the petitioner. Of course, if the petitioner had disclosed in more detail the family tree, it would rather strengthen his claim, but failure to disclose the names of all the members of the family cannot weaken his case and render his evidence unreliable, nor reduce the credibility of his evidence,when there are other corroborating evidences".

Furthermore, the Court also observed that the non disclosure of names of other relatives and non production of relevant evidences, other than what matters, cannot render the evidence of a person unreliable. In view of this the Court held that all the evidences are "corroborative in nature" and failure to disclose all relevant facts "does not ipso facto lead to the inference that his evidence is unreliable."

With these observations, a division bench of Justice N. Kotiswar Singh and Justice Manish Choudhury set aside the Foreigners Tribunal's order which declared Haider Ali as foreigner.

For the purposes of getting entry in the Assam National Register of Citizens, a person has to trace back lineage to persons who were residing in India before the cut-off date of March 24, 1971.

The Court also observed that the revenue records and other documents even though not creating title, are corroborating evidences to show linkage with his father and grandparents.

Case Before the Tribunal

After the notice from the Foreigners Tribunal was sent to Ali on 11th June 2018, written statement was filed by Ali stating that he was declared as foreigner without the authorities making a proper investigation or a field visit. Moreover, it was submitted he was never asked to produce any documents to substantiate his claims.

It was submitted by Ali that his grandparents' names appeared in the voters lists of 1965 and 1970 with their respective house numbers and that his parents name appeared in the voter lists of 2010 and 2018. Furthermore, it was also submitted that the grandfather's property was inherited by his father and other brothers in support of which revenue receipts were produced in the Court.

Accordingly written statement was filed by Ali in the Tribunal showing his electoral identity card issued by the ECI along with that of his father. Other documents including Birth Certificate, Village Certificate and High School records showing his father's details were also placed on record.

The Tribunal after examining the original records held that the petitioner had failed to discharge his burden of proving that he is an Indian as required under Section 9 of Foreigners Act, 1946 and accordingly, declared him to be a foreigner under Section 2(a) of the Foreigners Act, 1946. The reasoning given by the Tribunal was that Ali had failed to prove his link with other persons mentioned in the voter list of 1970 and also with his father and grandparents.

1. Non Explanation of Linkage Does Not Affect Credibility To Show Link with Grandparents

The High Court after distinguishing with the reasoning of the Tribunal observed thus:

2. Observations on Functioning of the Tribunal

Noting that a written statement under the provisions of CPC is a defence put by the defendant to respond to the allegations, the Court observed that in cases of proceedings before the Tribunal, no such plaint or charge is filed except for informing the said proceedee through a "mere notice or summon" issued by the Tribunal alleging that he is not an Indian citizen.

Furthermore, it was observed that all opportunities should be given to the proceedee to enable him to produce all the documents in his possession "even at later stage" to substantiate his claim that he is an Indian citizen.

Noting that the names of other relatives of Ali's father were brought into notice only during the cross examination, the Court observed thus:

"This disclosure does not in any way, in our view, shake the credibility of the evidence of the proceedee merely because the same was not disclosed in the written statement or in his evidence-in-chief. On the contrary, this disclosure fortifies his evidence and shows the truthfulness of the witness by not hiding any relationship. The disclosure of this information does not contradict any previous statement for it was never stated by the petitioner nor his father that his father did not have any other siblings."

3. Non disclosure of Names of Other Relatives Cannot Render his Evidence Unreliable

The Court observed that the fact in issue before the Tribunal was with regards to his ancestry linkage and not whether he had other relatives also. Therefore, the Court held that non-mentioning of his other relatives as that of his father cannot be a ground for disbelieving his testimony and the documents relied upon by the petitioner.

"All the evidences are corroborative in nature and failure to disclose all the relevant facts does not ipso facto lead to the inference that his evidence is unreliable. The more evidences one adduces, the better for him. But there is no law nor dictum that if the proceedee does not disclose the names of all the other relatives, other than what matters and does not produce all the relevant evidences other than what matters, his evidence cannot be believed." The Court observed.

Furthermore, the Court while noting that the practice followed so far is that nothing is furnished to the proceedee by the State except a notice or summon and that the onus of proof under sec. 9 of the Foreigners Act 1946 is also upon the proceedee, observed that:

4. Revenue Records are Corroborating Evidences even if No Title is Created

The Court also went ahead to observe:

"We are of the opinion that though the Jamabandi and other revenue receipts cannot create the title, nevertheless, these are corroborating evidences to show that the petitioner's father and his grandfather were in possession of certain land during the aforesaid period of 1966 to 1971, and as such they were residents of Assam."

Relying on the documents produced by the petitioner in detail, the Court observed that the standard of proof in a proceeding under the Tribunal is preponderance of probability and not proof beyond all reasonable doubt and if the petitioner has been able to prove that the names of his father and grandfather were shown in 1966 and 1971 thereby showing his linkage with them on the strength of voters lists after 1971, the Tribunal cannot reject the claim of the petitioner, merely because some documentary evidence were not produced.

In view of the aforesaid observations, the Court allowed the petition and set aside the Tribunal's order dated 30th January 2019 by holding Ali to be an Indian and not a foreigner.