'Master of Roster' Concept Not Equivalent To 'Master Of All I Survey': Calcutta HC Judge Questions Acting Chief Justice On Assigning Of Cases 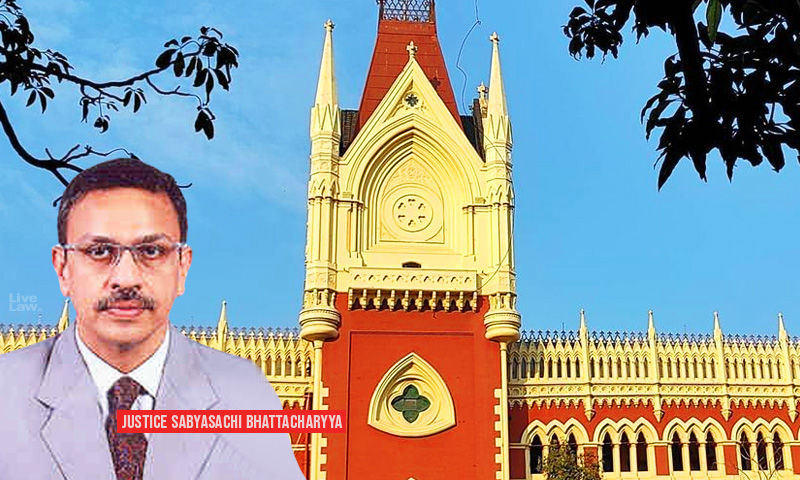 Justice Sabyasachi Bhattacharyya of the Calcutta High Court on Monday issued a strongly worded order objecting to the transfer of case from him to a Division Bench by the Acting Chief Justice Rajesh Bindal. Addressing a pertinent concern, Justice Bhattacharyya observed that despite issuing specific directions vide the earlier order dated July 16, to list the instant matter as a priority on...

Justice Sabyasachi Bhattacharyya of the Calcutta High Court on Monday issued a strongly worded order objecting to the transfer of case from him to a Division Bench by the Acting Chief Justice Rajesh Bindal.

Addressing a pertinent concern, Justice Bhattacharyya observed that despite issuing specific directions vide the earlier order dated July 16, to list the instant matter as a priority on the next working day i.e. on July 19, such directions were not complied with. Instead, the instant matter was listed before a Division Bench on the instruction of the Acting Chief Justice much to the surprise of Justice Bhattacharyya.

"I was amazed when my officer, as per my instruction, next intimated me that the RG had been directed to call for the records, to be allocated before a Division Bench, despite my judicial order dated July 16, 2021, on the instruction of the Hon'ble the Acting Chief Justice of this court", Justice Bhattacharyya opined.

Enumerating further on the action of the Acting Chief Justice and its purported violation of the Appellate Side Rules, Justice Bhattacharyya opined,

"Although it has been clarified that the Chief Justice (including Acting Chief Justice) is the Master of the Roster and "more equal among equals" (not by Orwell but our own Supreme Court), the excess equality pertains only to the Administrative Side of this court and cannot override the Appellate Side Rules, framed and modified by the Full Court comprised of all Judges of this Hon‟ble Court"

The Court noted that it had neither issued a criminal contempt notice nor was an order passed in a civil revisional matter under Article 227 of the Constitution that would necessitate such a listing before the concerned Division Bench. Accordingly, Justice Bhattacharyya remarked with anguish that such reassignment of case overnight without his knowledge creates 'translucence in the minds of all concerned parties'.

On July 19 Justice Bhattacharyya in the reassigned case in question had issued a scathing order highlighting the unfortunate state of affair pertaining to the conduct of virtual court proceedings which had reduced juridical adjudication to a 'circus show'. As a result, a show cause notice was issued against the High Court administration, including the Registrar General and the Central Project Coordinator due to such continuous interference in virtual hearings.

Further, the Court emphasised that the judiciary being the last bastion of democracy, transparency in its functioning must be of utmost priority to repose faith in the system. Although the Chief Justice is the 'master of the roster', it does not confer upon him unbridled powers to act on his whims and fancies without taking into consideration the interest of stakeholders.

"All stakeholders to the dispensation of justice, including the litigants, the members of the Bar, my esteemed colleagues, the Registry as well as every staff of this court, are entitled to the knowledge regarding the exact administrative mechanism in force at a relevant point of time for the allocation of cases. The 'Master of Roster' concept cannot be equated with the "Master of all I survey", even as per the Supreme Court's interpretation", the order stated.

Justice Bhattacharyya further noted that a copy of the letter of reassignment of the instant case was allegedly written and signed by the Acting Chief Justice, who was not even present in Kolkata due to a personal bereavement in the family, was subsequently sent via whatsapp and forwarded to him. Taking grave offence to the manner in which such reassignment was conducted, he observed,

"Since this Bench had determination on the relevant date, that is, July 16, 2021 as well as today, I felt it most indecent that, without showing the minimum courtesy of contacting me directly, the matter was sought to be assigned before some other Bench"

Addressing the inherent flaw in such reassignment, the Court observed that Division Benches cannot make the determination to take up such civil revisional applications, a concept that is generally learnt by the junior-most advocates at the time of their entry at the Bar.

"Chutzpah‟ (Yiddish) is probably not appreciated in the higher echelons of power. However, opacity creates whispers in the corridors and is not healthy for a judicial system."

Justice Bhattacharyya expressed serious doubts regarding the impartial functioning of the High Court considering the unprecedented chain of events and hence felt that it was his obligation to keep the Bar and litigants abreast with the ongoing happenings.

"I have serious doubts about the transparency of the system of dispensation of justice in our court in view of the above chain of events. Hence, I feel it my duty to inform all the beneficiaries and victims of such translucence in the system, since not only the litigants and the members of the Bar are stakeholders in the matter, but also my esteemed colleagues on the Bench and other staff of this court", the order stated.

Expressing his fear that the instant order might not be permitted to be uploaded by the existing power structures, Justice Bhattacharyya remarked,

"I sincerely hope that the uploading of this order will, at least, not be prevented by the powers-that-be, so that the contents of the order may appear in public domain"

However Justice Bhattacharyya observed that he was not one to disobey judicial decorum and propriety in due reverence of his learnings during his quarter of a century tenure as a practicing advocate and a few years as a Judge of the Court. Accordingly, he directed that the instant matter would be heard by the Division Bench in question "subject to the said Bench having determination to hear this matter in accordance with law" and in furtherance of the "basic tenets of transparency and judicial decorum".