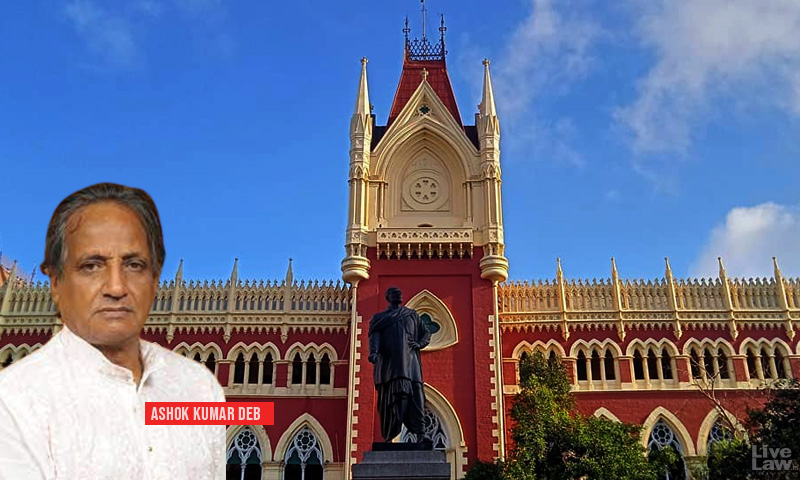 A writ petition has been filed before the Calcutta High Court seeking the disqualification of Trinamool Congress Member of Legislative Assembly (MLA) Ashok Kumar Deb who also happens to be the current Chairman of the West Bengal Bar Council. In the 2021 West Bengal Assembly Elections, Ashok Kumar Deb had contested elections from the Budge Budge constituency and had subsequently secured a victory. The Court is slated to hear the matter on July 23.

The petitioner Advocate Shankha Subhra Mukherjee has challenged the TMC MLA's position on the ground that on the date of election, the MLA had been holding an office of profit i.e. the office of the Chairman of the West Bengal Bar Council and therefore his candidature should have been disqualified as per the provisions of Article 102(1) and Article 191(1) of the Constitution. Accordingly, the petitioner prayed before the Court to issue a writ of quo warranto against the respondent for holding a public office in contravention of law.

Ashok Kumar Deb had recently courted controversy by sending a letter to the Chief Justice of India, in his capacity as WB Bar Council Chairman, seeking the removal of Justice Rajesh Bindal as the Acting Chief Justice of the Calcutta High Court. Following that, four members of the Bar Council had come out in public saying that Deb's letter, which alleged Justice Bindal of having political bias, was unilaterally issued without consultation with other members.

The petitioner contended that the office of the Chairman of the West Bengal Bar Council which has been established under the provisions of Section 3 of the Advocate Act, 1961 is an office of profit as the Chairman is entitled to various pecuniary benefits.

Further, the plea noted that the members of the State legislature are dissuaded from holding such an 'office of profit' under the government as they might be susceptible to government influence and thus might not be able to discharge their Constitutional duties properly.

"The intent is that there should be no conflict between the duties and interests of an elected member. Hence the office of profit law simply seeks to enforce a basic feature of the Constitution- the principle of separation of power between the Legislature and the Executive", the petitioner contended.

The plea thus observed that pursuant to the aforementioned tests laid down, TMC MLA indeed holds an 'office of profit' within the meaning of Article 191 (1) of the Constitution.

"All elections contested by the respondent when he was holding the office of profit in the form of Chairman of Bar Council were unconstitutional and so all the payments made to him either as pay or allowance is liable to be recovered from the respondent", the plea concluded.

Further the petitioner also implored the Court to issue a writ in the nature of mandamus directing the respondent to pay the penalty amount of Rs 500 per day for illegally attending the Assembly sessions as debt due to the government.