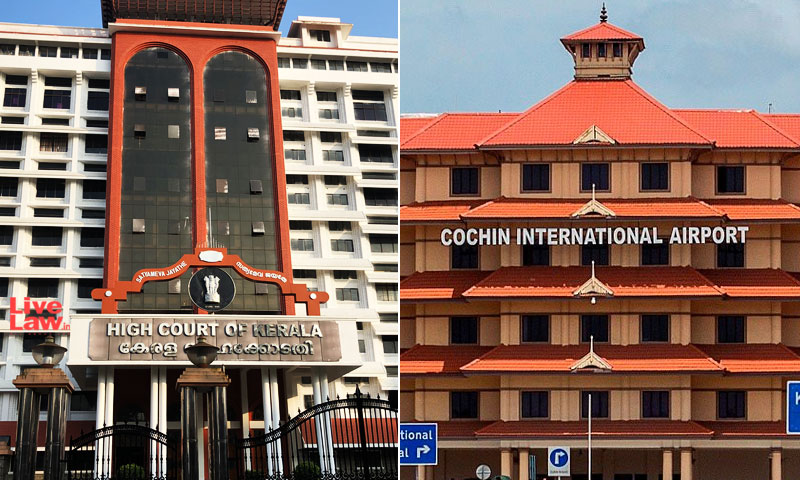 The High Court of Kerala has held that Cochin International Airport Ltd (CIAL) cannot be said to be an instrumentality of State within the meaning of Article 12 of the Constitution of India. The Court added that the employment of the persons by CIAL or the termination of their services do not involve any public element.

The Court was considering petitions regarding the termination of the petitioners service by the Cochin International AIrport Limited (CIAL). The CIAL (respondent), raised the objection that since it does not come under the definition of a State under Article 12 of the Constitution of India, it does not perform any public duties. This was considered by Single Bench of Justice P V Asha.

"It is an admitted fact that the State Government is having only 32.4% of the share in the paid up capital of CIAL. The Company does not get any financial assistance from the Government. It cannot also be said that the Company is having any State protected monopoly", court said.

The court answered the question whether CIAL is an instrumentality of State under as under Article 12 of the Constitution of India by examining various decisions of the apex court.

"(1) One thing is clear that if the entire share capital of the corporation is held by the Government, it would go a long way towards indicating that the

Corporation is an instrumentality or agency of the Government.

(2) Where the financial assistance of the State is so much as to meet almost entire expenditure of the corporation, it would afford some indication of the corporation being impregnated with governmental character.

(3) It may also be a relevant factor ... whether the corporation enjoys monopoly status which is State conferred or State protected.

(4) Existence of deep and pervasive State control may afford an indication that the corporation is a State agency or instrumentality.

(5) If the functions of the corporation are of public importance and closely related to governmental functions, it would be a relevant factor in classifying the corporation as an instrumentality or agency of the Government.

In Pradeep Kumar Biswas v. Indian Institute of Chemical Biology after considering all the judgments relating to the same held as follows in para 40 of the judgment:

"40. The picture that ultimately emerges is that the tests formulated in Ajay Hasia are not a rigid set of principles so that if a body falls within any one of them it must, ex hypothesi, be considered to be a State within the meaning of Article 12. The question in each case would be — whether in the light of the cumulative facts as established, the body is financially, functionally and administratively dominated by or under the control of the Government. Such control must be particular to the body in question and must be pervasive. If this is found then the body is a State within Article 12. On the other hand, when the control is merely regulatory whether under statute or otherwise, it would not serve to make the body a State."

In the light of SC precedent, the judgment delivered by Justice PV Asha held :

"On an analysis of the provisions contained in the Memorandum of Association, Articles of Association and Ext.R2(a) to (d), it functionally and cannot be said that administratively CIAL dominated is financially, by or under the control of the Government. It cannot also be said that it is having any traffic government services; under conferred the monopoly Airport in Authority providing of India air Act, providing of air traffic service is the function of AAI. AAI is bound to render assistance also for establishment of Airports. CIAL is only facilitating the AAI to perform its statutory obligations. Therefore the contention that CIAL is a State or it is undertaking public function or sovereign function since the Airways, Aircraft, provision for Aircrafting etc, come under 7 th schedule as item No.29 would not have any relevance", the court remarked.

The Court also held that grievance of the writ petitioners had no 'public element' so as to attract the jurisdiction under Article 226 of the Constitution of India.

"The employment of the petitioners by CIAL or the termination of their services do not invovle any public element. Therefore it cannot also be said that a writ petition would lie against it under Article 226 of the Constitution of India"