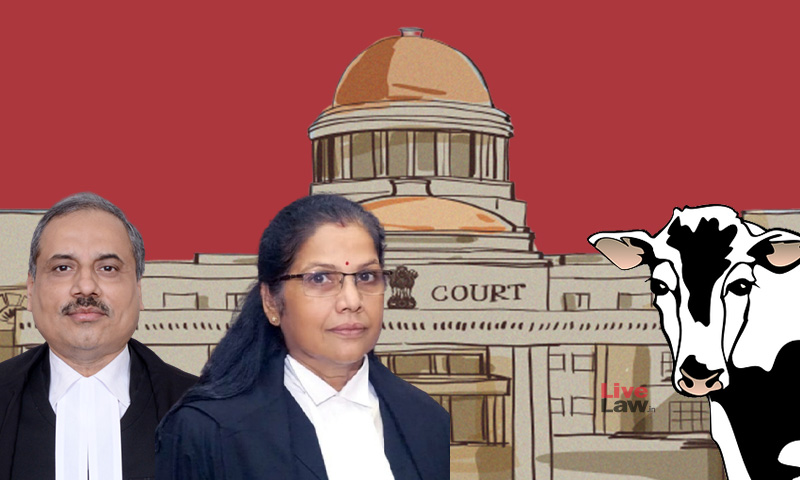 The Allahabad High Court recently quashed a detention order passed under the National Security Act, 1980 against 3 men who have been accused of cutting small pieces of beef for selling purposes in a house in secrecy. The Bench of Justice Ramesh Sinha and Justice Saroj Yadav observed that the case of the petitioners/detenues of cutting cow beef in pieces in the secrecy of their own...

The Allahabad High Court recently quashed a detention order passed under the National Security Act, 1980 against 3 men who have been accused of cutting small pieces of beef for selling purposes in a house in secrecy.

The Bench of Justice Ramesh Sinha and Justice Saroj Yadav observed that the case of the petitioners/detenues of cutting cow beef in pieces in the secrecy of their own house can at best be described as a matter affecting law and order and not public order.

On receipt of information that 5 people (including the detenues) were cutting the beef for the purposes to sell it, the Incharge Inspector along with other police personnels raided the house of the detenues/petitioners.

Therein, two detenues (Parvez and Irfan) were arrested on the spot along with beaf and weapons for cutting the beaf, however, their associates Rahmatullah, Karim and Rafi were fled away from the spot (who were later on apprehended and arrested).

The recovered beef was examined by the Veterinary Doctor and it was verified that the recovered meat was of beef.

Thereafter, an FIR under Sections 3/5/8 of the U.P. Prevention of Cow Slaughter Act, 1955 and Section 7 of the Criminal Law Amendment Act, 2013 was registered against the petitioners/detenues and co-accused Karim and Rafi were lodged at Police Station Talgaon, District Sitapur.

It was alleged by the State Of UP that when the aforesaid news spread in the area, villagers of the Hindu community gathered near the house of the petitioners/detenues and all of them were excited and communal amity was disturbed.

It was also argued that after great efforts, the police succeeded in assuaging the general public and taking steps for restoring public order and thereafter, the detention order was passed on the ground that as a result of the acts of the detenues and co-accused, the sentiments of the Hindu community were hurt and Hindu-Muslim harmony was adversely affected and an atmosphere of fear and terror was generated, public order was disturbed and the crowd became belligerent.

At the outset, the Court noted that the answer to the question whether the case is one involving public order, or is only a matter affecting law and order, depends upon the quality and degree whether the act has been done in public gaze and in an aggressive manner with scant regard to the sentiments of the other community or whether it has been done in a concealed manner.

In this backdrop, the Court noted that the incident had taken place in the secrecy of the petitioners/detenues' house at 5.30 in the morning and it was a solitary incident of cutting cow beef in pieces away from the public eye.

"There was no resistance when the petitioners/detenues Parvez and Irfan and the other co-accused were being arrested by the police at that time," noted the Court.

"an act of slaughtering a cow in the secrecy of one's own house in the wee hours probably because of poverty or lack of employment or hunger, would perhaps only involve a law and order issue and could not be said to stand on the same footing as a situation where a number of cattle have been slaughtered outside in public view and the public transport of their flesh or an incident where an aggressive attack is made by the slaughterers against the complaining public, which may involve infractions of public order."

Consequently, the Court opined that the detention order against them was passed without the presence of any material to indicate that the petitioners/detenues had any criminal history.

The Court also observed that it was only a surmise based on no material or evidence that the petitioners/detenues might have been earlier involved in such an incident and he may show such a repetitive tendency, in case they will be released on bail.

With this, the habeas corpus petitions succeeded and were allowed and the detention order nd impugned consequential orders were quashed.